A sunny and dry but rather cool day yesterday at Grosmont, with Bill Dobson, Ian Pearson, Roy Marshall, Nigel Hall and myself. Usual cups of tea to start with and discussions on what we were to do as we were waiting of a shunt with the 08 shunter. The tea club has now been extended to include Martin Ashburner and William Parrish from the Essex Loco Society, working on the boiler of 825 on No 8 Road.

I brought the BR style dome cover for the J27 down from upstairs which Nigel spent the rest of the day stripping down and repainting in primer. Ian oiled up all side rods, big ends and little ends and Bill lubricated the pistons. Roy cleaned the left hand con rod, which had acquired quite a bit of rust and grime over time sat on the floor of Deviation Shed. Ian spoke to Chris Cubitt about the movement of the Q6 as he was driving the 08. There was a long list of shunts to be done before the Q6, and Ian was told it would be 1 o'clock before we could have a shunt. Bill asked Ian to disconnect the drive from the steam reverser shaft to the expansion link which he did and tied the shaft up out of the way, as it was touching the intermediate axle. Hopefully this should make it easier to set the valves, but no valve setting was done as the MPD valve setter was away.

No alfresco lunch today as it was a bit too cool for sitting outside at the picnic tables, so we ate inside on the bench in Deviation Shed. Derek Shorten called in to see us during the lunch break: he is struggling to walk with arthritis in his knee joint and went for a ride out on the train to Pickering. Just after 1pm, Chris Cubitt started up the 08 "Gronk " with Josh, the diesel fitter, as shunter. After moving the crane and breakdown coach, the 08 was attached to the Q6 and, with great driving skill and communication with the shunter, it was moved very slowly to test the piston travel on both sides. These proved to be OK and lining up with the pop marks. The locomotive was then taken outside for removal of the header. After a lot of time and effort, using the telehandler with strops attached round the header and onto the tines, and in spite of a lot of help and effort from William Parrish, including use of a burning torch to heat the flange and bolts and try to break the seal, it all proved to be of no avail and we had to retire unsuccessful. The Q6 was left outside Deviation Shed and Mark O'Brien said he would have another go today once he had finished with the J27. While the Q6 was outside however, I cleaned the mechanical lubricator which was rather grubby with oil and dirt, as well as keeping an eye on progress with the J27.

Next working party will be this Saturday, 28th April. 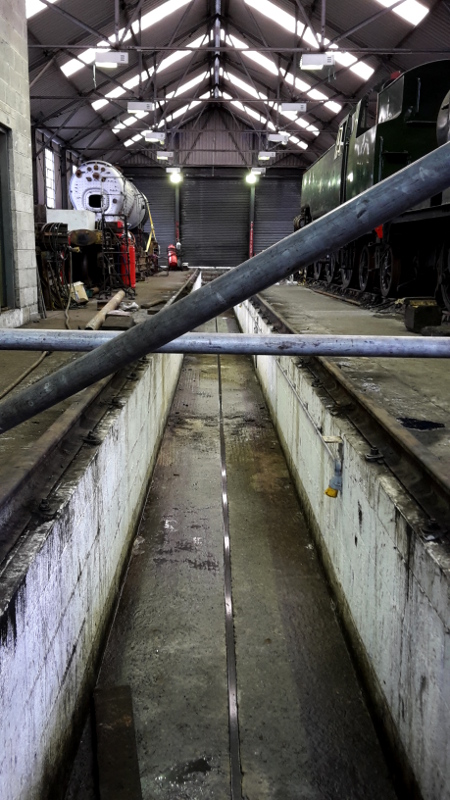 In other news, the guttering replacement on Deviation Shed has now been completed and one positive consequence has been a drying out of the pit (see Nigel Hall's photo) - the pump has not had to be used during the last three working parties. Long may it continue! On the Railway, the boiler and frames of 9F No 92134 have arrived and were moved into the running shed yesterday. It is reported to be here on the same basis as 80136 - completion (it apparently has a boiler ticket) and then running on the NYMR in return for a number of years. The B1 also returned to New Bridge yesterday following its holiday in Scotland - at least its tender was seen on a low loader heading East along the A64 near Whitwell on the Hill at about 5.45pm. In its absence, and 80136 on wash out, services were in the hands of Repton and 76079, along with the DMU.