Having returned from his holiday in 'C' territory - it turns out to have been the Cotswolds, where there is more steam working, rather than the Caribbean! - Ian reports a cool, showery morning at Grosmont yesterday. By the time Bill and Ian had arrived, Bryan Orange and the JV's had opened up Deviation Shed, with Bryan and Luke Perry fitting the new shed signs and the other JV's working on S15 No 825 down at the MPD, helping to paint the inside of the tender coal space. Another JV, Tom Readman, was employed grit blasting various nuts and bolts off Piglet's loco Lucie. 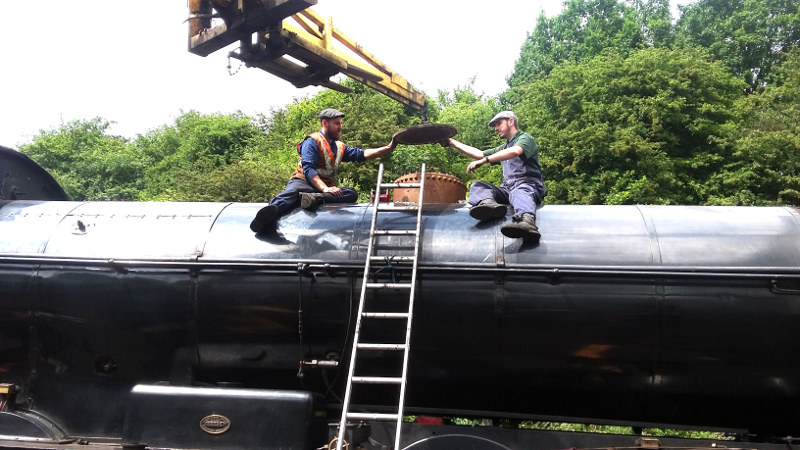 After the usual cuppas Bill and Ian set about working on the big end brasses which required extra shims. They hadn't been started long when the MPD cleaning squad came to see if there was anything they could do to help out. With Alex Jolly as charge hand cleaner, the boiler was cleaned and the dome cover was fitted by Chris Henwood and Thomas Dibbs (see photo), with Chris Kelly driving the tele- handler. Prior to that, Chris Kelly had corked the one new stud that was fitted last year. One of the other cleaners removed the driver's side injector overflow pipe and put it in the machine shop for Keith Pardy's attention next week - it requires a hose fitting on the end of the pipe. Bill and Ian first made and fitted an extra shim to the left big end brass, and refitted the taper pin, but found that the brass was locked onto the crank pin with no side movement at all. So then they went round to the right hand side, adjusted the shims, put in the taper pin and got the same as the left side: no side movement on the crank pin. Bill then decided to leave things as they were for the moment, put a repair card on Barneys desk telling him of the situation, and with a request for him and Owain to check the bearing clearance as it may need the white metal scraping.

Bill and Ian had lunch alfresco at the picnic table outside Deviation Shed as it had become quite mild but a little overcast. They got some of the JV's after lunch and Luke Perry painted the regulator handle red gloss. He then assisted Scott Middlemiss knocking out more concrete from the smoke box as requested by Mark O'Brien, removing about 4 barrow loads. They also emptied the MPD site bins which were overflowing with litter. Luke assisted Repton's crew during disposal to empty the smoke box.

Quite a few visitors, with some money spotted going into the box. The locos running yesterday were Repton, the B1, 80136, and the Class 25 diesel. The J27 had been out the previous two days following its wash out, had a rest yesterday, but is on the roster for today. It will be stopped again on Tuesday or Wednesday, dependent on other locomotive availability, for prepping for its special launch train on Thursday. Piglet and his Dad were working on Lucie all day in Deviation Shed.

Some items seem to be missing from the workshop, namely 2 medium sized adjustable spanners and a couple of paint markers, whilst the bench needs a general tidy up. A possible job for the next working party on Wednesday 20th June, when we may also need to assist with cleaning the J27 for the next day.