A fine cooler day at Grosmont yesterday with Bill Dobson, Ian Pearson, Nigel Hall, Derek Shorten and myself. Bryan Orange and JV Luke Perry were also present at the end of their Deviation Shed holiday, and were working on the emergency lighting.

Usual cups of tea all round then thoughts on what to do! The loco was down at the MPD on No 4 road where there is no pit, and was having the 8 header studs drilled out due to some thread damage and to make a better access to expand the ring into the main steam pipe. The large tube expander required for that job arrived from LNWR Crewe in the morning, and is expected to be carried out today. With the replacement of the studs, an internal hydraulic could be carried tomorrow, and if all is well, the boiler inspector hydraulic early next week. In preparation, a couple of leaking valves in the cab were attended to by Bill and myself - the steam shut off valve to the vacuum ejector and the steam heat valve. The steam shut off valve will need replacing as it is not suitable for steam operation. It appears to be a water valve but has been on the loco for some years! 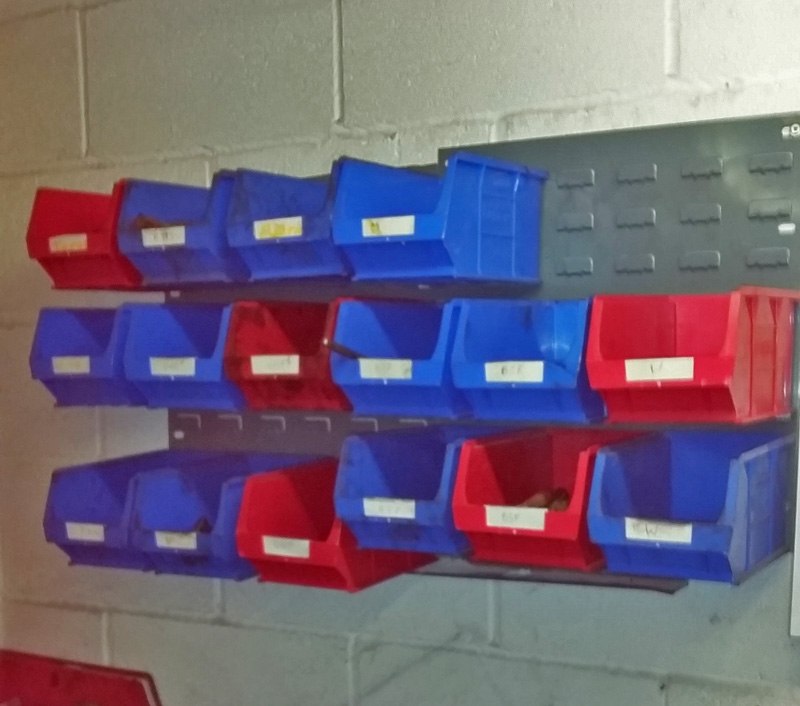 The rest of the team set about sorting out all our taps. These had been thrown in a box for many years, but now they are all separated into containers which have been attached to the south end workshop wall, with the boxes marked accordingly W (Whitworth), BSF (British Standard Fine) and so on (see photo ). This job took up most of the day but the work bench is looking a lot tidier at that end of the workshop. Ian also asks if anyone can identify a copper ring which was found when clearing the bench (see photo). I also carried out the monthly defibrillator check, much to the interest of our many visitors.

Lunch was had in Deviation Shed with Derek brewing the tea and quite a lot of visitors around. At the end of the day the pit pump would not work although it had been operating fine during the morning, clearing water that had been drained from 825's boiler. Bryan checked round the electrics and found a loose wire in the switch panel which he repaired and it is now working OK. Nigel acquired one of our treasured biscuit tins, which was filled with tannin for use in the water treatment for the J27. He delivered it to the Wensleydale Railway last night.

The steam crane was in action lifting the boiler off Green Knight No 75029 which attracted much visitor attention, and was extensively filmed by the Channel 5 documentary team. The boiler is now down at the boiler shop waiting for assessment and overhaul. The B1 was carrying a wreath in memory of Dave Fowler, the B1 Trust Secretary, who has died from stomach cancer. The work on 825's boiler is ongoing, with continuing problems in getting a satisfactory seal between the J pipe and steam pipe.

There will be no working party this Saturday. The next working Party will be on Wednesday 15 August, by when a successful hydraulic test could clear the way for the refitting of the header and the installation of the new flues.

Last minute news from Leeming Bar. The J27 has suffered a broken engine spring and been stopped this morning. Tim Williamson is going over to Grosmont to collect two spares and the engine will hopefully be back in traffic tomorrow.