A bright warm, but muggy, morning at Grosmont yesterday with Bill Dobson, Ian Pearson, Jon Bradley, Steve Hyman, Dave Donegan, Nigel Hall, Roy Marshall and myself. The usual cups of tea for starters, some having biscuits as well from the replacement biscuit tin following the sacrifice of the original one to tannin for the J27 on the Wensleydale! 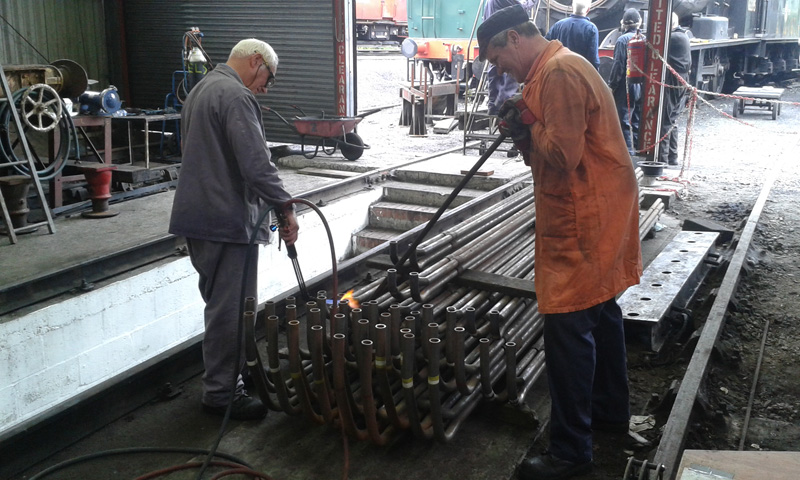 The header had been fitted and successfully hydrauliced on Tuesday, so the elements were annealed by Ian and Jon (see photo) and polished with emery paper while all the header holes were cleaned with the drill and flapper wheel. The snifting valve was fitted and also the valve that supplies steam to the vacuum ejector from the manifold. Last week it was intended to replace this valve, but Steve Hyman investigated the source of a new one, and found out that these valves are OK for both steam and water. So our old valve only required a new washer, which Steve made from material from James Walker called Chieftain X which met our specification, and the valve was fitted back on the Q6.

Lunch was had alfresco on the picnic benches outside Deviation Shed. After lunch, the top row of elements were placed into the flue tubes. Bill had to go up to Egton Show to do a presentation with the Goathland hunt, but left instructions to remove the blank from where the regulator fits the main steam pipe and fit the regulator. Having removed the blank we were told by Barney Casey that it should not be removed, nor the snifting valve blank which had been removed to fit the snifting valve fitted earlier during the morning. So the regulator blank was refitted and the snifting valve removed and its blank refitted. Then Chris Kelly and Barney struggled to get the elements to fit under the header and move them into their respective location. There was talk that they were too long but, after using a variety of bars and packing to no avail, the cavalry were brought up from the MPD, and with the involvement of more of the shed staff, eventually, by 4pm, two of the elements were successfully fitted into the header (see photos). Hopefully, all the remaining elements will be fitted in the next few days, a further hydraulic carried out, followed by another in house steam test before one for the boiler inspector. The major remaining job will then be the valve setting. 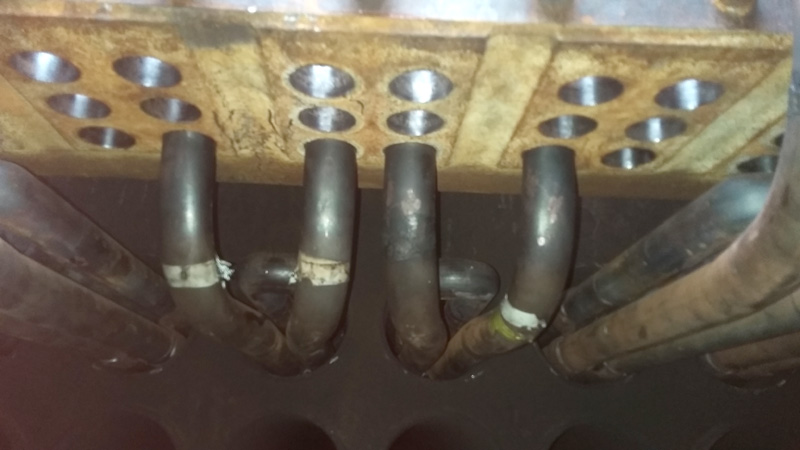 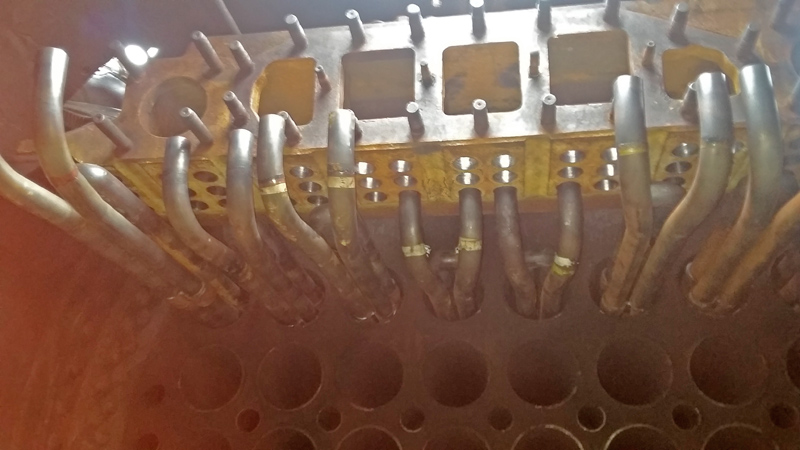 Meanwhile, Steve stripped down the steam heat valve, as a new valve head had been made, but the seat inside looks slightly damaged and may have to be recut. I spent the day down in the MPD workshop, away from all this excitement, working on the vacuum ejector, cleaning the body and grinding in some of the valve heads. Nigel joined me later in the afternoon, and following a conversation with Keith Vardey (who was being filmed by Channel 5 machining the remetalled axle boxes for Sir Nigel Gresley, one of which will have to be remetalled), we decided it would be best for him to rebuild the ejector, as he took it apart originally, and would probably need to do so again to satisfy himself that we had put it back together properly!