Today the Q6 arrived back at New Bridge after its holiday on the Severn Valley Railway. 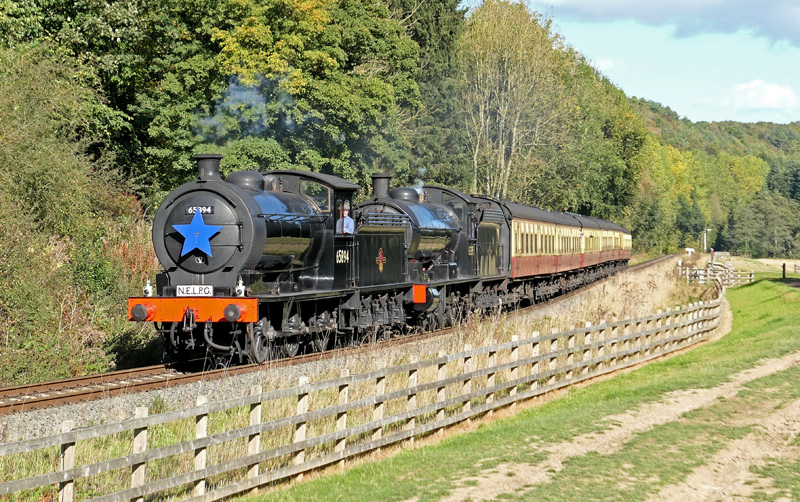 During Wednesday morning, Nigel Bill, Steve Hyman, Ian Pearson, Derek Shorten and myself, gathered at Deviation Shed. There was of course no Q6. I had called in at New Bridge on the way and found Allelys had just finished unloading the engine, and I was told that the tender had been loaded at the Severn Valley the previous tea time, and was expected by lunch time.

We agreed with Barney therefore that we would go back to New Bridge after an early lunch and wait for the tender's arrival and unloading, before setting to, joining the two together, and putting in a warming fire for overnight, before it reurned to Grosmont on Thursday. At Deviation Shed therefore, Derek kindly dealt with the washing up and made a pot of tea, and we sat and put the world to rights whilst watching the trains go by.

Lunch was taken on the picnic tables at Grosmont Station, and Nigel, Steve, Ian and I then made our way to New Bridge to await the arrival of the tender. That turned up within ten minutes of our arrival, but we had to wait about an hour for unloading to be completed and the wagon to clear the yard before we could get started. Having joined the engine and tender with the links, the locomotive was them moved on to the pit using the PW 08 diesel with Ian at the controls and Nigel as shunter. Once there, the hose was used to put sufficient water in the boiler, the guard irons were refitted and all the remaining connections completed.

The worst job was getting the sheets of plywood out of the coal shute in the tender. These had been put in to stop the coal falling out while it was being transported, but with the coal having been drawn forward, the boards were jammed in tight against the tender coal boards. Only by hammering these up were we able to, eventually, get the plywood out - and the coal duly poured forth all over the cab floor. There are also two long scratch marks down the left hand side of the tender as a result of a close brush with some vegetation at some stage of the journey.

Fortunately, they are not too deep and should be able to be rubbed out fairly easily.

However, Steve lit a warming fire and we left the site at 5.45. The Q6 was then returned to Grosmont the next day, with the smokebox now facing south, and on Friday was in traffic with the J27 for the first day of the Gala. It will continue in operation today and tomorrow, and will then be on the roster for service as required, along with the J27, until the end of the season.

While all this activity was underway at Pickering, Derek remained at Deviation Shed and cleaned the outside bench and the area around it, along with door to the shed.

No more working parties therefore for the moment, but if anyone wants to go down to Deviation Shed to do some cleaning, tidying and sorting, or just to watch the trains go by and chat to visitors, they will be most welcome.

In the meantime, many thanks to all those who have been down and working on the Q6 for the last 18 months. It has been a long time, but it made it in the end, and yesterday's photo of the J27 and Q6 double heading on the approach to New Bridge makes it all worthwhile.