A cold grey start to the day, but the sun soon came out and it turned into a lovely day, albeit a bit on the cool side. Steve Hyman, Bill Dobson, Nigel Bill, Nigel Hall, Ian Pearson and myself were present, although Ian was immediately commandeered to take a diesel down to Pickering on the first service train from Grosmont, following the failure of Eric Treacy with cylinder cock problems in the station. The token machine giving access to the Whitby line had also broken down so no NYMR trains could run to/from Whitby (it was repaired in time for the afternoon services). Not a good start to Piglet's birthday, but away from all this, Nigel B lit the stove and I made the first cup of tea - for which I received a number of complaints that it was not brown enough. To improve my technique, I was told I would need to make the lunchtime cuppa as well in the hope that practice would make perfect.

On the work front, Nigel B and Steve spent the day in the pit under the Q6 working on the remaining cylinder cock valves, whilst Nigel H fitted the two new 1918 worksplates to the cabsides of the T2. In Ian's absence, Bill acted as RO for the morning, whilst I did the monthly check of the defibrillator, did the washing up and water run, and arranged with the MPD Office for the reurn of the J72 axleboxes to Hopetown by Sue Smeaton tomorrow morning. I also brought up the box of new hi vis vests for Deviation Shed which are now upstairs in the workshop. Lunch was held round the stove, with Nigel B cooking some sausages for his sandwiches.

After lunch, with Ian's return, he, Bill and myself cleared the workbench and put out the electrical equipment ready for the PAT testing by the Friths and Bryan Orange which is to take place tomorrow. James Newton from the boiler shop also joined us to start work on installing the rocking firegrate for the T2. I also got called to do an interview on the MPD Office phone with Radio Tees about our efforts to locate the living relatives of Sir Vincent Raven to attend the the T2 launch on 1 May. 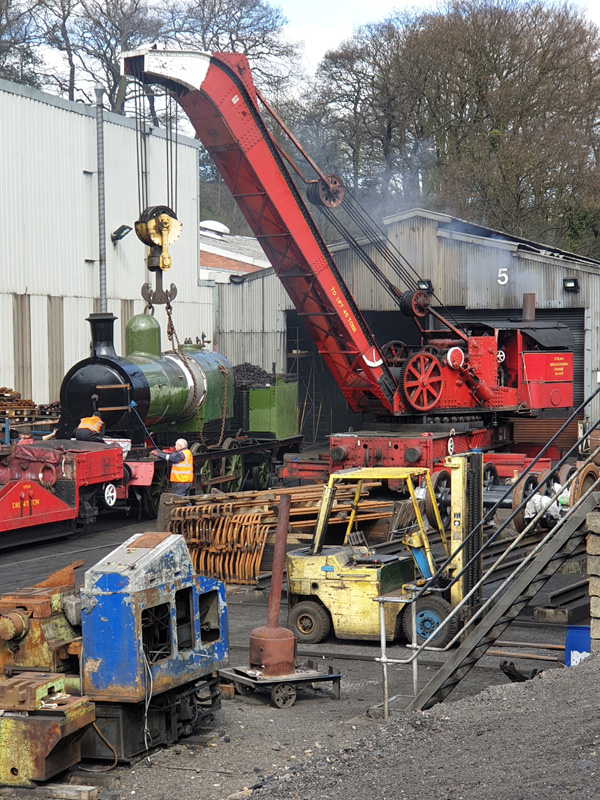 Elsewhere on site, the crane was in use to lift No 29's boiler back into the frames (see photo). The new cylinder block meant that it was a tight fit and will need a little final adjustment. The J27 was not in traffic and was sitting outside the MPD. It was in use over the last weekend, is not required for this week's timetable, but should be back in service next week when the the timetable requires three steam locomotives.