Ian Pearson reports a fine sunny morning today, but cloudy later, at Grosmont with Bill Dobson, Ian, and, later, Jon Bradley. Bill brought a wreath which he fitted to the smokebox door in memory of Derek Norris who passed away on Saturday morning. 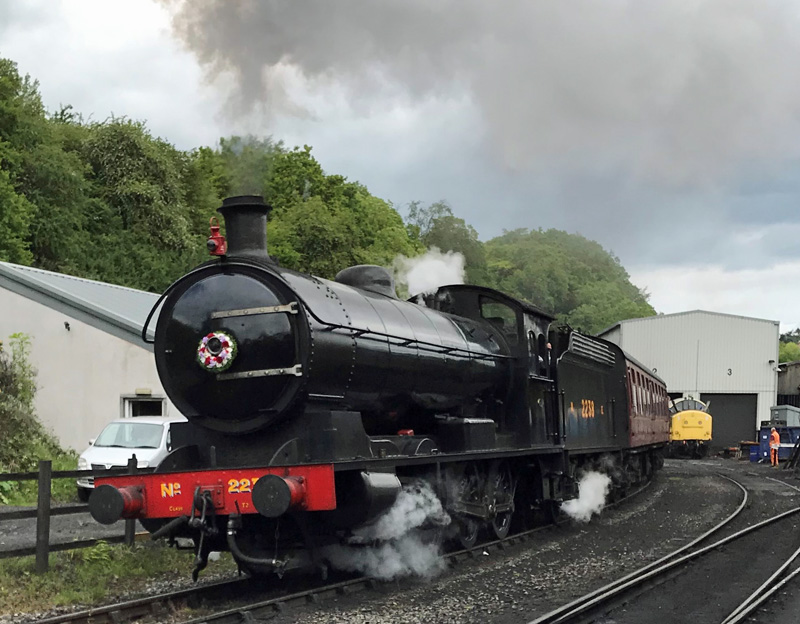 Ian noticed that the right hand intermediate side rod cork had sheared off. It was hitting the top step stay bracket securing bolt, so Ian removed the offending bolt, cut about 1/4” off, replaced the bolt and tightened it up. A new cork was fitted. He checked the cork later after a run to Pickering and back, and the new cork was still in situ and in one piece. Jon had an 8x4 sheet of plywood delivered from Wilf Noble of Ruswarp which Ian and Bill carried up to Deviation Shed from the MPD. Jon arrived about lunchtime with more wood for the winter rest room that he is constructing round the stove. He had also brought some old breeze blocks which Bill and Ian have put outside the east of Deviation Shed. These may be useful for the pathway or wall when the fire door escape route is completed.

Lunch was had in Deviation Shed with quite a few visitors popping in, although there was not a lot to see as No 7 Road is now clear of locomotives with the move out of the S160 to the MPD. After lunch Jon worked all afternoon on the benches around the stove, while Bill and Ian cleaned the pit out and looked around for some mesh type material to fit into the sump to protect it from getting full of ash. They couldn’t find anything suitable so Bill is going to acquire some next week. The pump gave a lot of trouble today: sometimes it worked OK and sometimes it wouldn’t. It must have been taken to bits half a dozen times, but it did work eventually. Sorting this out took up most of the afternoon.