After the K1 came out of traffic on Sunday 14th April, the regulator valve was removed on Tuesday 16th Aprilso that the seat could be ground to improve sealing when shut. However, when the regulator was removed it was noticed that the J pipe, on which the regulator valve is mounted, was fractured. There appeared to be 2 small cracks radiating from fixing holes; this required repair before the engine could be reassembled and it was decided that the best long term repair would be by welding. So, the J pipe was removed and taken to Cast Iron Welding - Cast Iron Welding is the firm we used for welding up the fractured K1 cylinder two years ago. 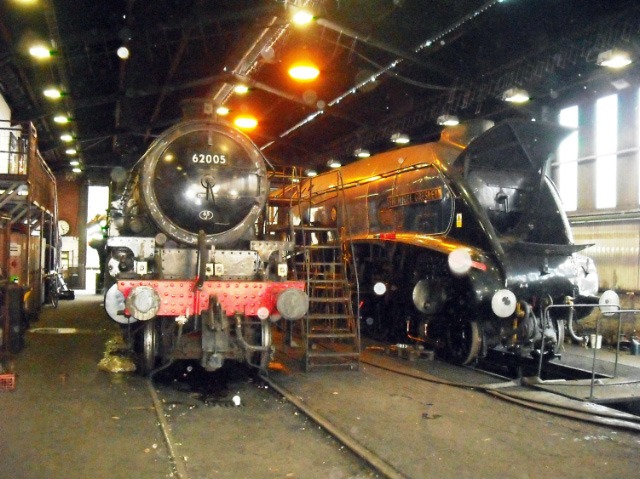 The welded J pipe was collected from Cast Iron Welding on Wednesday 24th and taken straight to a machine shop in the Teesside area for finishing. The J pipe, regulator valve and dome were then reassembled Friday 26th and the K1 steam tested on Saturday 27th.

During this time in the shed the cab was a hive of activity too as the new GSM radio was installed, and at the front end heat resistant paint was applied to the smoke box to smarten up the loco for the Anniversary train.

The repairs to the regulator and J pipe appear to be successful. The regulator which has been passing for sometime now seems to be much improved. However the steam test had to be cut short because of a fizzing mud hole door which needed attention.

The boiler was drained on the evening of Sunday 28th for attention to the leaking door. The boiler will be refilled on Monday evening and a warming fire lit in advance of a steam test on Tuesday. If this is successful then on Wednesday 1st May the K1 should be available to haul the anniversary train from Whitby to Pickering.