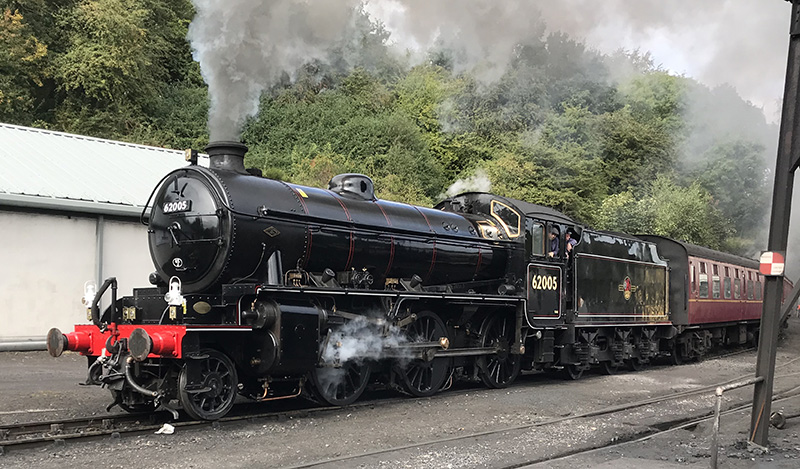 There is not a lot to report with the T2 on the wheel drops having the L/H driving spring changed. The cause of this breakage is being explored with the NYMR, which apparently occurred on Sunday when it was on the late running 1630 ex Grosmont. The K1 was being prepared for service to replace the B1 which had been stopped due to leaking tubes. The attached photo shows it passing Deviation Shed on the 1330 ex Grosmont, looking magnificent.

Bill was asked to remove the T2 steam brake isolation valve which was seized in the open position. After removal of the spindle part of the valve which has the seat on a thread which is the seized part, it was heated while secured in a vice. However, it would not unscrew so, rather than damage it, Bill decided to fit it back into the valve body on the locomotive. He then sent a message to Nigel Hall to see if there is a spare valve at Darlington. Another job on the T2 was to take off the brass oil cap on the L/H intermediate coupling rod which had been damaged slightly, causing some sharp edges which were filed off and a new cork fitted. This problem seems to have been caused by the broken spring.

The tool box on the back of the J27 tender was removed as it has a broken lid which Jon is going to repair. He also repaired our old wheel barrow.

Lunch was had in Deviation Shed with lots of visitors round. S15 No 825 was in traffic today, along with the K1 and Standard Tank No 80136. As there was no Whitby steam due to the B1 failure and 5428 on washout, the class 25 was working the Grosmont - Whitby section.

The next regular working party will be on Wednesday 25th September, the day before NELPG Day as part of the NYMR Gala, so there should be locomotives to clean at the least. In addition, Paul will be going to Grosmont to do a days work on the K1 on Sunday (22 September): if anyone would like to join him please let him know by e-mail or text.