A cold and cloudy with sunny intervals sort of a day at Grosmont yesterday but at least no rain. No Ian Pearson either, who was laid low with a bug (get well soon), but Paul Hutchinson, Angie Buxton, Mike Bloomfield, Bill Dobson (and Zac the dog), Nigel Bill, Steve Hyman and myself did make it. First job was to put the stove on - or at least try to. It would not draw and there was clearly a blockage in the flue. To avoid filling Deviation Shed with smoke and gassing ourselves in the process, the bottom of the flue was dismantled once the fireclay seal had been broken out, and a considerable amount of dirt removed by Steve Hyman and Nigel Bill after rodding the complete flue (see photo). Flushed with this success, tea was brewed and the work for the day assessed. 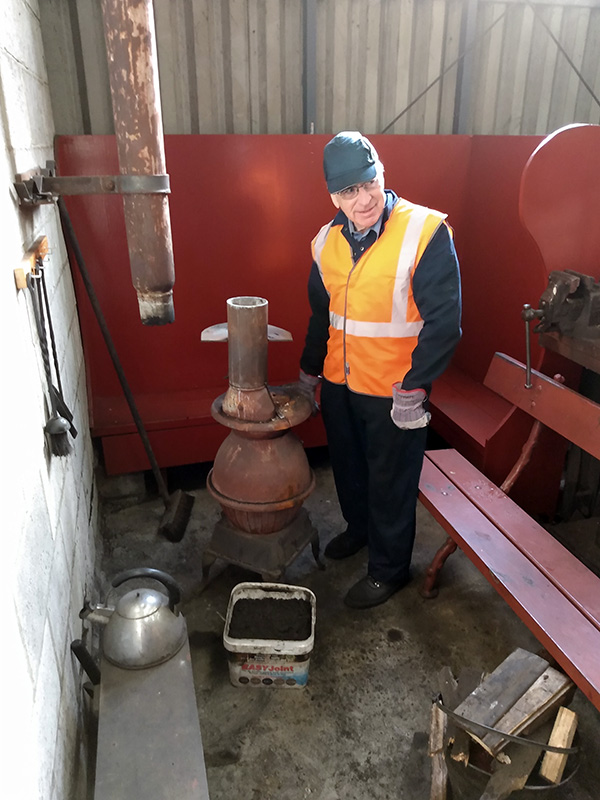 The J27 had been moved out of Deviation Shed and was now down at the running shed, where the MPD staff had started the wash out. There was a loose valve head which Bill dealt with, but otherwise there was nothing that could be done.

The T2/Q6 was in steam and was to have a loaded test run up the bank to Goathland to check that the repairs to the leaking tubes were OK following its successful static steam test last week. This took the form of banking the King on the 12.30 Diner from Grosmont, which also had the advantage of providing some steam heating for the passengers on the train. Bill Dobson travelled on the footplate and reports that the T2/Q6 pushed the King most of the way to Goathland. Certainly it made a great sight and sound as it came past Deviation Shed, with its exhaust echoing around the valley as it climbed the bank past Esk Valley cottages. No problems were reported on its return to Grosmont, but a check of the firebox tubes will be made this morning once it has cooled down. Assuming all is well, it will act as spare engine for the rest of the week. 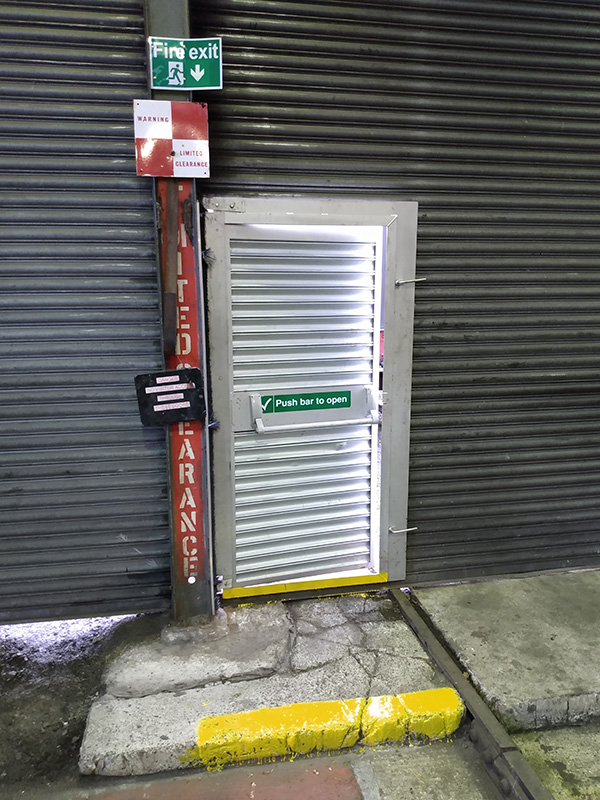 Work therefore concentrated on the K1, once some jobs had been completed in Deviation Shed itself. In particular, Nigel Bill put up a fire exit notice on the stanchion next to the fire door in the No 7 Road roller shutter door, and painted a yellow strip on the front of the step to meet health and safety requirements (see photo). We also had a visit from Piglet to discuss the disposition of locomotives, as we need to get all three of ours inside this weekend. No 6 Road is now full with No 29, 80135 and No5; No 7 Road with the pit is needed for the T2/Q6 (north end) and K1 (south end so it can easily be moved to Pickering at the end of the year for onward transport to the Great Central Railway); and the J27 will go on No 8 Road along with Lucie before their move to Pickering for the Santas. That means that Dame Vera Lynn will have to move out temporarily, but there should be space for it to return once the J27, Lucie and the K1 have left.

Lunch was had round the stove, with the warming plate in use for Nigel Bill's pies, and then it was on with the K1 again. On Saturday, Paul, Angie and Les Harper had removed the piston valves immediately after the locomotive came back on shed after the Diner. They came out quite easily, with both being removed in less than two hours. Tuesday saw Les Harper, Mike Bloomfield, Angie and Paul check the cross head, big end and little end clearances, remove both con rods, both cylinder covers and both cross head cotters. They also drained the boiler, removed the top and side mud hole doors and the primary screen. Chris Henwood also called in on his way home from work and die pen tested the little end pins (which were found to be satisfactory).So yesterday the mud hole doors and valve rings were cleaned by Nigel Bill, Steve Hyman, Bill Dobson and myself, while the boiler was washed out by Angie, Mike Bloomfield, and Paul, the latter two getting soaked in the process. The steam heat valve was removed by Paul. He also wanted to split the piston rods from the cross heads, but the splitting gear failed so that remains to be done.

With it being half term this week for another batch of schools, the Railway was quite busy. Trains were well loaded and the locomotives in traffic included Eric Treacy, B1 No 1264, King Edward II, and the T2/Q6. Repton also returned to Grosmont after its travels, on the rear of the Diner from Pickering. We had a steady flow of visitors throughout the day, and, thanks to Steve Hyman's persuasive charms, money was seen going into the donations box.

With the end of the operating season on Sunday, and winter maintenance now started, working parties will return to the Saturday/Wednesday pattern. So the next working party will be on Saturday 2 November, and then on Wednesday 6 November. Paul may well arrange some additional working parties for the K1, but will notify those by separate email.