A cold fine morning but cloud setting in after lunch yesterday at Grosmont. No trains running until the end of the month when Santa specials and The Northern Lights start operating using the J27. The track has been split on Fen Bog for sleeper renewal.

The team today was Bill Dobson, who could only stop for a cup of tea and give us some jobs on the T2 due to other arrangements, Ian Pearson, Steve Hyman, Nigel Hall and myself working on the T2, and Paul Hutchinson, Angie Buxton, Les Harper, Mike Bloomfield and later on Chris Henwood and Richard De Sadeleer working on the K1. The K1 and T2 were shunted onto No 7 Road in Deviation Shed on Tuesday and, yesterday, Lucie and the J27 were shunted into No 8 Road (see photo). As a result, Dame Vera Lynn was moved outside and is now standing immediately by the roller shutter door on No 8 Road. 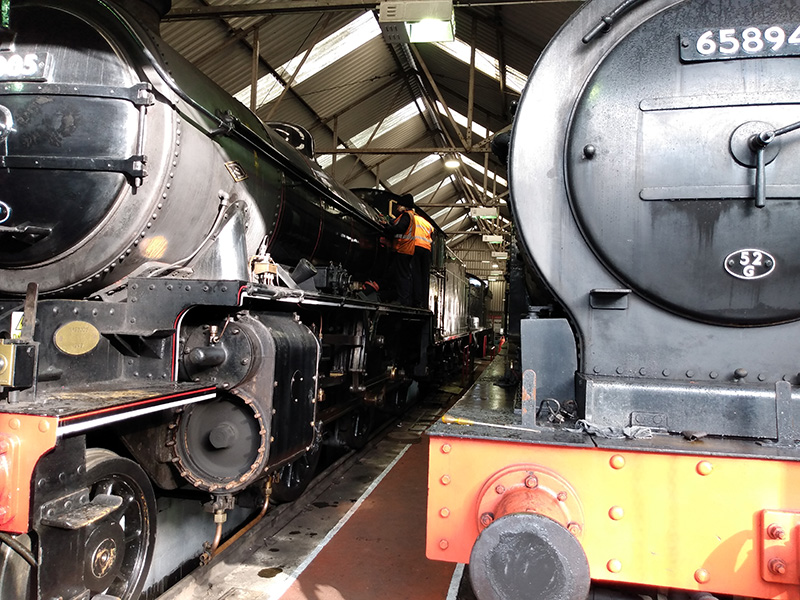 After the usual cuppa, work started with Steve cleaning out the T2's smoke box with Ian assisting, in preparation for removing the main steam pipes. However, they soon realised that the removal of the main steam pipes wasn't as easy as it looked because the spark arrestor was in the way and making any progress very difficult. Nigel brought some heavy duty cardboard from home and stacked it against the sheeting wall on the side of No 6 Road. It is intended to be used for lying on when work is required while in the 4 foot. He also slackened a washout door on the lower right hand side of the T2 to allow the boiler to drain into the pit. As a result the pit pump was on for most of the day. First job for me was to light the stove and then I removed the cosmetic covers from the T2 cylinder covers. That enabled me to access the cylinder nuts and slacken them using a 7/8" socket and a long handled ratchet socket from the K1 toolbox. Although all the cylinder nuts are now loose, we never got round to removing the cylinder covers - a job for next week.

Lunch was had around the stove and a decision was made to remove the spark arrestor from the smoke box. So, after lunch, Ian set about the removal of the spark arrestor with my assistance and we managed to remove some parts of it. Some of the small bolts would not unscrew so Ian cut them of with an angle grinder. Unfortunately, the rest of the studs will have to be drilled out later. There is therefore still quite a bit of work to do to remove the rest of the spark arrestor - another job for next week. The pieces taken off at the moment have been marked up and some photos taken. Steve and Nigel spent all afternoon removing the T2 regulator handle and stuffing box which are now on the bench in the workshop. Mark O' Brien inspected the T2 firebox tube plate and reported all was OK after its steam test last week and use at the weekend after Repton had failed.

In the meantime, on the K1, most of the effort concentrated on getting the boiler ready for Friday's insurance company cold exam. The mud hole door openings and washout plug holes were cleaned, the gauge frames stripped and examined, cleaning the firebox was completed and the tube ends oiled. The safety valves were also stripped and examined, and our own examination of the boiler was carried out including identifying which roof stay nuts are to be replaced ahead of next season's service.

In addition, the steam brake flexible pipe between the engine and tender was removed so that it can be used as a pattern to manufacture some spares. The wear on the cross head top slippers was also checked against the wear on the piston heads.

No work was done on the J27 today but the left hand valve has been taken out for repair by the MPD staff.