A fine bright morning driving to Grosmont but on arrival it was dull and very cold with a frost. It brightened up later on, although never warmed up. The team on the T2 was Ian Pearson, Bill Dobson, Nigel Bill and just before lunch myself Chris with finally Jon Bradley. Working on the K1 was Paul Hutchinson with Les Harper and, late afternoon, Chris Henwood and Richard De Sadeleer. Stove lit and a cuppa to warm up before there was a 10 minute power cut. Then it was on with removal of the T2's LH piston by Bill, Ian and Nigel, using the hydraulic table. 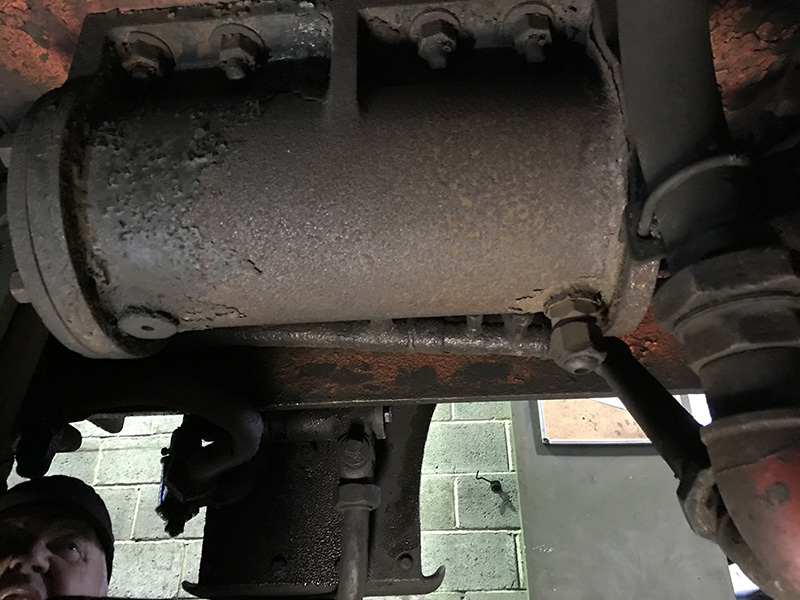 Lunch was had around the stove, with Bill having to leave due to some personal commitments. After lunch, with me assisting this time, the T2's RH piston was removed in the same way. The left and right piston packings springs, followers and nuts are in separate containers upstairs on the right hand top shelf. After afternoon tea, Nigel Bill worked under the engine removing the brake linkage between engine and tender and also the locomotive's trailing brake rod. This was done to gain better access to the steam brake cylinder (see photo) which needs removal for refurbishing the piston. We were going to remove the regulator rod, but there’s not sufficient room to withdraw it without splitting engine and tender, so this job was put on hold until the K1 departs and there is sufficient room available. There was then another power cut around 15.45 lasting about 20 minutes, although the emergency lighting system cut in and provided essential illumination as by now it was dark outside.

On the K1, the work carried out included removal of the front TPWS arial bracket (new bracket to be fitted on Saturday), servicing the small ejector valve, servicing the graduable steam brake valve, fitting the gauge glasses, gapping and fitting new LH piston rings, finishing the current batch of roof stay nut replacements, completing the manufacture of two slacker feed pipe clips, refurbishing and fitting one mud hole door and sealing (internally) the recently repaired areas of the tender tank. The new big end was cut and put in to soak and the fire hole bottom protector plate buttered up.

The J27 remains on No 8 Road in Deviation Shed, but the necessary steel for the spring hanger bracket repair has been received and the required welding and machining well under way. That is hoped to be completed by tomorrow and once refitted, subject to a satisfactory examination and steam test, it should be available for Santa services from 14/15 December to the end of the season. It will be operating from Grosmont rather than Pickering however: the Pickering services will continue to be run by the B1.

Next working party will be on Saturday, when Bryan Orange and the JVs will also be attending. It should be a busy reassembly day on the K1 with the RH piston rings to gap, boxing up to finish plus the RH cross head, both pistons, both cylinder covers, both con rods, the front TPWS arial bracket and the fire hole bottom protector plate to fit. On the T2, the steam brake cylinder will be to remove.

More generally, there will be a first working party today on No 5, while, yesterday, Repton and No 825 were on steam test, with No 29 lit up at the end of the day, and the 9F whisping steam on No 4 Road all day. So lots of steam around. Not bad for any visitors (of which there were none) bearing in mind it is a non operational period!