A bitterly cold, frosty day with thick fog on the Moor roads on our way to Grosmont yesterday. Sub zero temperatures until the late afternoon so we were glad of the stove - thanks Bill! A large turnout with Ian Pearson, Steve Hyman, Nigel Bill, Ian McCall, Neil Smedley, Jon Bradley, myself, and newcomer to Deviation Shed, Ed Bolan. Bill Dobson made a brief appearance at the start of the day, trying to arrange the move of the piston rods to Ian Storey’s workshop and the steam pipes to North Shields - but without success. No working party on the K1 yesterday, but an apology from me - it has been pointed out that Paul and Angie's dog is called Tonks and not Tonk as I have referred to it previously.

After cups of tea, Ian M and Neil broke up some timber for lighting up the K1. Then they were under the T2 cleaning the studs left in the bottom of the drag box which held the steam brake cylinder in situ. All the old split pins were removed bar one and a die nut run down each stud. Ian P took Ed around the MPD site on a brief induction and also arranged for Ed to attend an MPD induction course with Howard Heath on 8 January at 9am. Steve removed the exhaust valve from the brake cylinder and cleaned it up. It was taken down to show Barney who is going to do some repairs to the valve and also the rest of the brake piston and cylinder. These were taken down to the MPD and left on a bench just outside the machine shop.The K1 was shunted outside Deviation Shed during the morning. 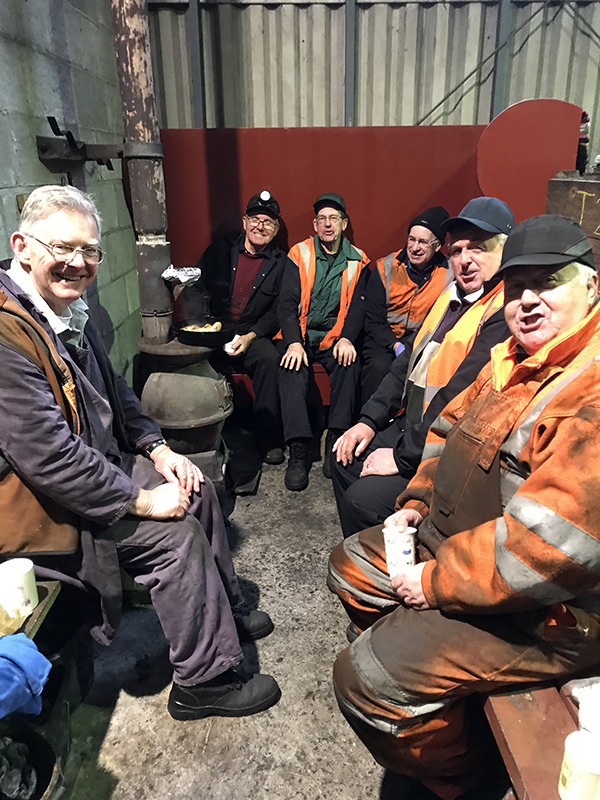 Lunch was had around the stove with Steve treating us to pan fried sausages which he had brought, with finger buns (see photo). There were also mince pies, and we were regaled with a number of colourful tales from Nik Proctor who joined us for a cup of tea. After lunch, the two pistons were moved near to the roller door ready for loading. With the K1 moved out, the T2 ‘s tender was drained and the engine pinched forward to allow removal of the regulator rod. Most of the afternoon was spent try to remove it, but, after about 6ft showing, it would not move any further. Even Barney had a go but it would not move any further out. Nick Simpson told us to erect some scaffolding between engine and tender with a standing platform on making the job much safer, so between 4pm and 5pm Steve, Nigel and Ian P erected the scaffolding platform, with a little help from Jon who had been repairing the J27 tool box. That now requires re-painting. We also took the opportunity to clean out the front of the tender by the various link bars, of accumulated lumps of coal, coal dust and grease. Ian P had set up a warming fire on the K1 which he lit about 3pm. I also did the monthly check of the defibrillator and kept the tea flowing during the day.

Elsewhere, Dame Vera Lynn is now back in Deviation Shed on No 8 Road, with Eric Treacy sat on No 8 Road outside the Shed awaiting tyre turning, as its flange depth is now outside acceptable limits. In moving the K1 outside on No 7 Road, it became clear that the track outside was no longer in an acceptable condition. One side, near No 6 Road, had subsided significantly resulting in an unacceptable cant on the rails, and it has therefore been condemmed for use, other than with specific permission and extremely close supervision. Another urgent job to add to the P/W Department's list.

Four locomotives were on steam test yesterday - the J27, 92134, 825 and Repton. Apart from the lack of trains on the running line, it looked just like a normal operating day at times - we even had a couple of visitors in the afternoon! The Channel 5 documentary team were also around doing some filming.

That was the last regular Wednesday working party for the year. The next one will be on 8 January 2020. The K1 was on steam test today, and Paul will circulate details of any separate working parties to be held between now and its departure to the Great Central Railway at the beginning of January. Between Christmas and the New Year, it is also planned to be running on NYMR service trains.

So, as the year draws to a close, many thanks to everyone involved for their help and support at Grosmont throughout 2019, and my best wishes for a happy Christmas and wonderful New Year. See you again in 2020.