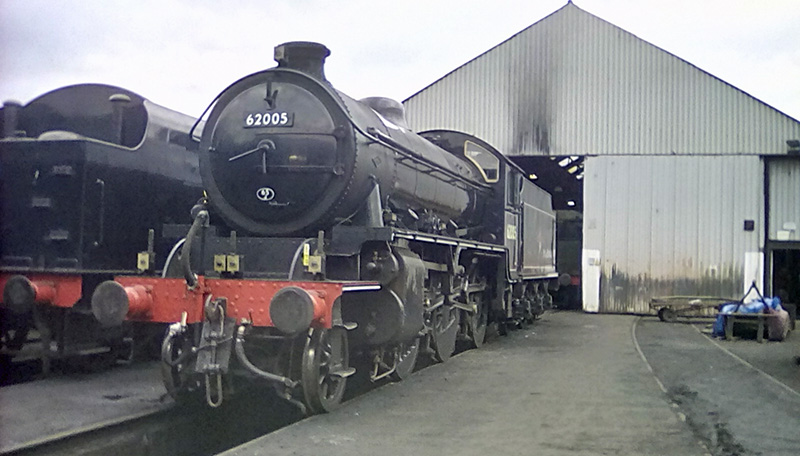 After the K1 finished its NYMR duties on New Year's day Peter Whitaker, Ken Morrison and I went to New Bridge on Thursday to split the engine and tender, remove the NYMR's kit (firing shovels, coal pick, bucket etc) and to take what I hope are the final measurements for gauging the locomotive.

The move by road to the GCR was booked for yesterday but the low loaders turned up on Thursday lunchtime. Both engine and tender were therefore loaded that afternoon. The move then took place yesterday as planned the only complication being a blow out of one of the trailer tyres as the low loader carrying the loco came off the A64 on to the A1. This delayed the journey by 2 hours.

The delay did not stop the loco getting to the GCR yesterday afternoon. Angie and I had travelled down to meet it and along with some of the GCR staff, reunited the engine and tender. The engine and tender were then hauled from Quorn, where they had been unloaded and reunited, to Loughborough (see attached photo taken by Angie this morning). We stayed in Loughborough last night so that we could sort the various tools we had brought and to make a start on preparing the loco for work on the GCR. We also examined the loco and carried out a couple of minor repairs.

The loco will be steamed next week as part of the GCR's acceptance procedure and is due to work photo charters 13th - 16th Jan and then during the Winter Gala 24th - 26th Jan.

Finally many thanks are due to Kieran from the NYMR C&W dept for volunteering during what should have been a day off to do the shunting required to get the loco loaded at New Bridge.