Ian Pearson reports a cold dull morning, but getting out fine by later on at Grosmont yesterday. With Bill Dobson, Steve Hyman, Ian McCall, Ed Bolam, Nigel Bill, Jon Bradley and Ian himself. Stove lit and tea brewed with a discussion about how to get the brass bushes out off each T2 cylinder. It was decided to make up a pulling device from materials around the workshop - one small disc, one larger disc and a piece of threaded bar, along with a couple of nuts and washers. 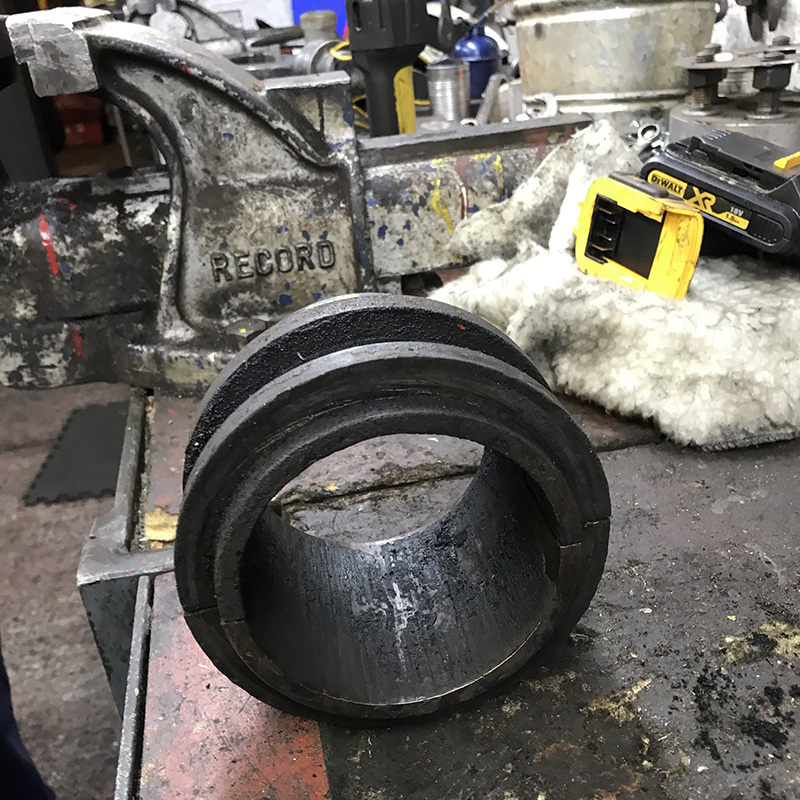 With this device, both brass bushes were successfully removed. They were found to be badly contaminated with carbon (see attached photo) and the left one was cleaned by Jon. It was manufactured in two halves and these have been put in the L/H gland packing box which is upstairs above the workshop. Lots of carbon was removed from both cylinders and their ports- Ed worked on this all day. Steve cleaned off the old steam reversing valve gasket from the boiler side and cleaned the flange, then fitted a new gasket and reversing valve. Unfortunately, while tightening the nuts, Steve hit his thumb with a hammer he was using, causing a cut across his left thumb. His thumb was treated down at the MPD by first aider, Adrian Dennis. Steve was OK after treatment and continued with his work. The accident was reported to Bryan Orange who is sending an accident report form to Steve. Steve a!so filled in an accident report at the MPD. Jon and Ian P got a short driving job just before lunch, taking the Class 37 from the shed down to the station and then up the main line to just beyond the bracket signal No 17. It is now in section for working to Goathland later this week when no signalman will be required and P/W will have a possession. Lunch was had around the stove.

Jon gave the brake cylinder a coat of primer and also painted the J27 toolbox. Ian M and Nigel worked on the L/H tender water valve. The carrot was taken off and ground in, was found to be working OK, but the linkage was seized. Eventually, with some heating, this was freed and now is working fine, although it needs securing which will be done on Saturday. The R/H water valve and linkage seem to be working satisfactorily. Ian P and Steve fastened an air line to the steam reversing cylinder to operate it. They managed to move it forward and back very slowly to remove any water trapped in the cylinder.

Apparently the recent gales have blown off a roofing sheet which was eventually found at the south end of Deviation Shed. Bryan Orange is arranging for that to be replaced as a matter of urgency, and for some other small roof repair jobs to be done at the same time.