Ian Pearson reports a fine cold day with blue skies all day at Grosmont yesterday (in contrast to Sydney where it poured down all day!) with Bill Dobson, Nigel Crisp and Ian himself working on the T2. Down the Shed, Chris Henwood, Paul Hutchinson, Angie Buxton, Neal Woods, Ashley Moore and Thomas Dibbs were working on the J27.

The stove was lit and the usual brew was made, along with a lot of chatter and passing of information regarding work on the J27. Bill and lan worked on the T2 regulator crank. Bill was up on the boiler trying the withdrawing device which Ian Storey had made, and had given to Bill and Ian on Thursday when they visited Hogg Engineering at North Shields who are making the new main steam pipes. But when Bill tried to fit it to the regulator rod it was a little on the tight side, so Ian ground a small amount of metal off from the slot. After the next fitting the slot was OK, but Bill thought the holes in the other plate where the threaded bar goes through, needed opening out a small amount. So the plate was drilled out slightly bigger, then re-assembled back onto the regulator rod, and the pressure put on by tightening up the nuts (see photo), but nothing moved. Then it was time for lunch which was had around the stove. 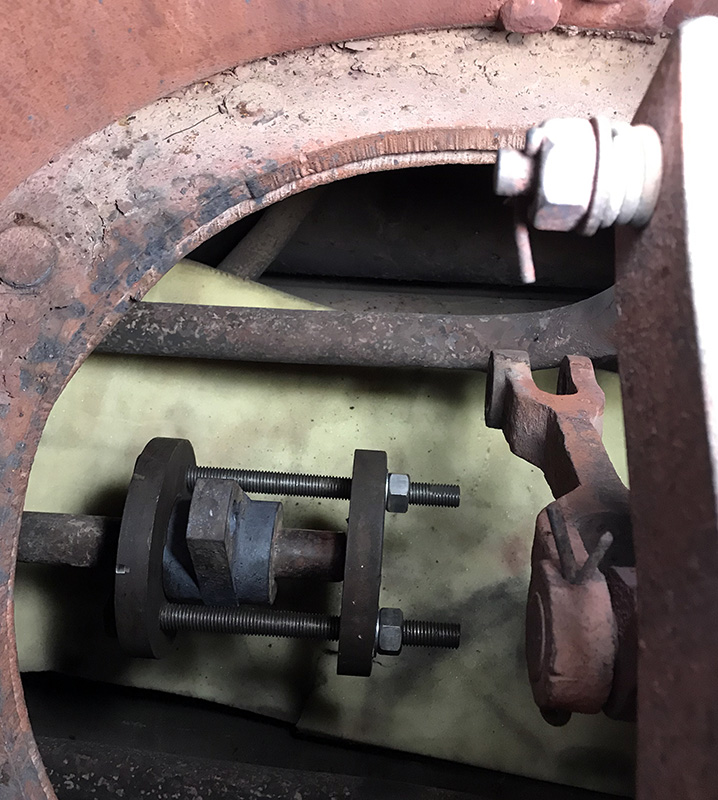 After lunch, in spite of major efforts to get the crank to move, it would not budge. So a lot of heat was applied, then more pressure was put on the withdrawal nuts, but still no movement. The crank was even doused with cold water and more pressure put on, but it still would not move. So in the end they had to give up and call it a day. Ian thinks it is going to have a sleeve fitted - maybe! Whilst all this was going on, Nigel Crisp spent the day setting up the cylinder boring machinery - see photo. 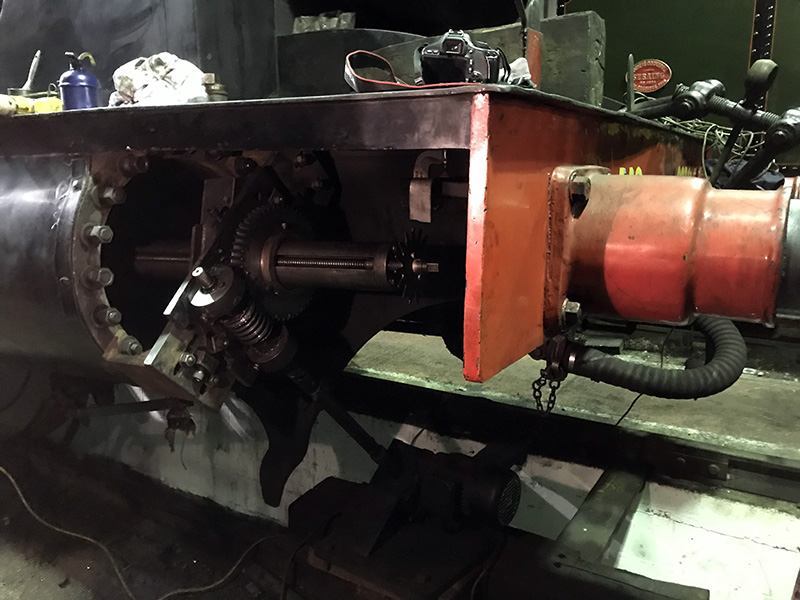 Meanwhile, on the J27, Angie was in the cab removing and examining the clack box valves - she has become somewhat of an expert at this job. She found the clack valves themselves needed more than just lapping in, as the valves faces were concave, so Paul has taken them to turn them on his lathe to correct this. The right hand steam valve threads were found to be worn, so Neal Woods has taken this away to have a new spindle made. The side rod caps were removed by Paul, and the clearances between crank and bush were then measured. The results have been emailed to ian Storey for advice, as one was found to be nearing the limit normally run on the K1. Thomas, Ashley and Neal were hard at work removing the right hand valve cover, and then removing the valve itself. This was after a bit of pinch barring the engine, and some reverser lever operation was performed, to get the cross head in a position to remove its cotter.

Neal and Chris then removed the rings and have completed 75% of the cleaning. One was found to be broken so Neal will see if there is a spare at Hopetown. Ashley removed and labelled all the of the mud hole doors and the majority of the washout plugs, which have been stored in the RH locker. Thomas removed the RH cylinder cover nuts, leaving 2 on for now. Paul cut, trial fitted, and left to soak In oil, a new felt for the trailing left rod bush. Plenty done therefore, and Chris now has a list of jobs for the next J27 working party on 25 January.