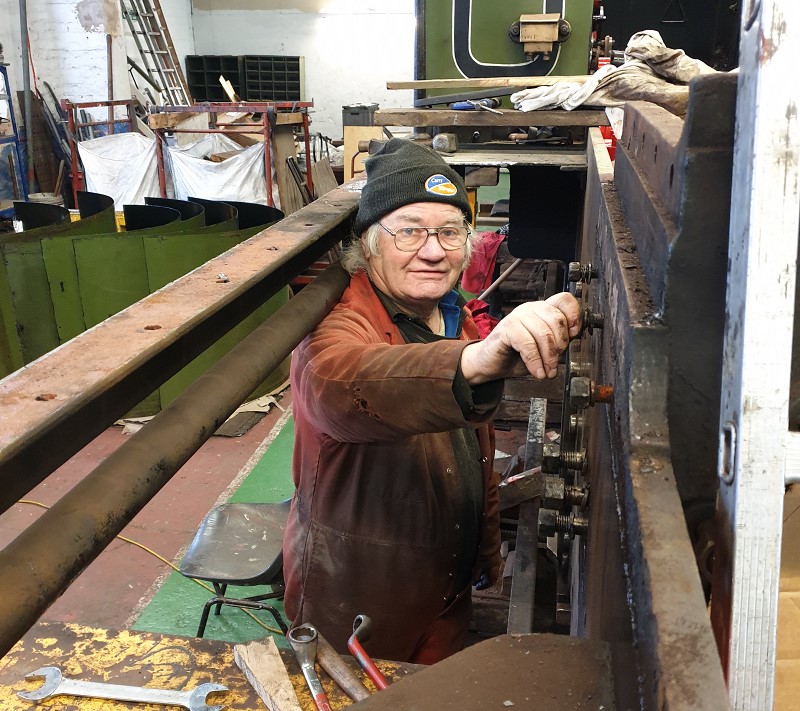 A small working party of Arthur Jenkins, John Jones, Tim Williamson, Ed Bolam, Colin Bowman and Nigel Hall arrived after the new year holiday. After lighting the fire and an earlier than usual brew we got down to some work.

Arthur and John spent the morning servicing the T2 (Q6) drain cocks. Some of these are serviceable, some are worn out and will need to be replaced. Ed got a gloss coat onto the insides of the final barrel cladding sheets. Tim managed to slit the J72 running board at the weld whilst Nigel went down to Machine Mart to obtain some extra cutting discs. With both running boards slit all hands lifted the running boards off, Tim removed the frame side angle iron ad replace the nuts on the studs.

Colin Bowman arrived after lunch, he managed to covert fluorescent light in the mess room with low earth resistance to take a LED tube. The  dubious components are now bypassed.

Arthur and Tim made a start removing the fitted bolts holding the cylinder block to the frames. Heat, hammer and needed to drill one bolt to weaken it. The magnetic drill has not retuned form Carnforth yet.  Arthur tried with a hand drill but unfortunately broke the bit inside the hole. By good luck he’d weakened the bolt sufficiently and it came out  at the next hammering.