In my continued absence, Ian Pearson reports that it was a fine, cold day at Grosmont yesterday, with Ian himself, Steve Hyman, Nigel Bill, Ian McCall and new member Frank Shotton. Joining later in the day was Gordon Wells, but no Bill or Zack! However, Bill had emailed Ian P a job list, and had left the magdrill for Ian P early morning on Grosmont Station platform after he had repaired it a few days ago. Bill had asked that the hole in the T2 tender way shaft be drilled out, so Ian P took it up to Deviation Shed on a station trolley. Ian M, who was a friend of Frank, took him around the site, and Ian P bumped into Howard Heath during the morning, so arranged for Frank to get on this Saturday 's induction course.

After lighting the stove, a cuppa and a chat about trying the magdrill, the conclusion was reached that it would be very difficult to set up as well as potentially quite dangerous, so, following some advice from Owain, the use of the drill was abandoned. One of the fitted bolts on the locomotive way shaft was extracted, and Nigel is going to take it to Ian Storey's so he can make three new bolts. Ian P, Steve and Nigel finally managed to remove the tender way shaft (see photo) which took all day due to the bolts being rusted in. After the bolts were removed, and with help from Gordon Wells and use of a pair of pull lifts and toggle bars, it was lowered down onto a sleeper and removed to the north end of Deviation Shed ready to go to Owain for machining the brake linkage hole. All the scaffolding was taken down by Nigel, Steve and Ian P and returned to the MPD. 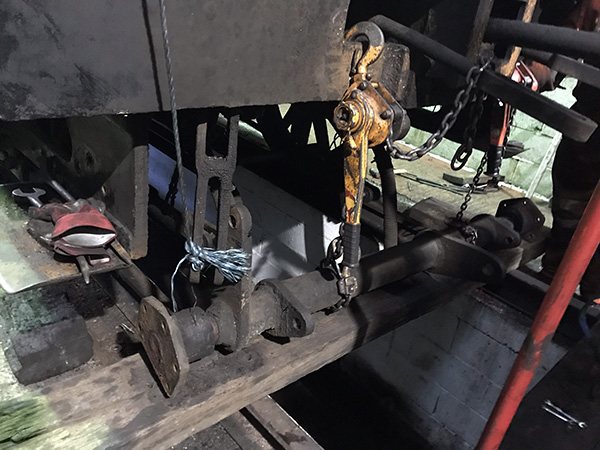 Ian M and Frank worked all day trying to remove the right-hand cylinder cover on the J27. The cover was so tight that it took all day to move it into a position for removal, but by 4pm it was time to go home. So actual removal waits for Saturday.

Arthur Jenkins and John Jones called in Deviation shed during the afternoon for a social visit and made us a cuppa and they also took the magdrill back to Hopetown.

Next T2/Q6/J27 working party will be on Saturday 1 February, with plenty of work on both locomotives, so please make it if you can.