Ian pearson reports a fine cold morning at Grosmont yesterday, but warming up later and sunshine all day! Those present were Bill Dobson, Ian McCall, Frank Shotton and Ian Pearson himself.

First job for Ian P was to to open No 7 Road roller shutter door to allow the J27 to be shunted down to the MPD for washing out. Frank got the job of lighting the stove, while Ian M brewed up our usual cuppa, before Bill arrived. After the J27 had been shunted out, while having the early morning cuppa, Ian M asked whether the spring had been fitted to the T2 steam brake cylinder last week. No was the answer, so Ian M had to remove the cover and fit the spring which was kept down at the MPD. One of the cylinder cover studs had also gone missing so Ian M had to make up a new one which he fitted. Then all the cylinder retaining nuts were flogged up and split pinned. This job is now finally completed. Frank worked underneath the T2 removing split pins and retaining nuts from the right hand side of the reversing weigh shaft housing, while Ian P and Bill set about bringing two 25 ton jacks up from the MPD. They were hoping to use the metal beam from the wheel drops to jack up the engine but, unfortunately, it was in use, so, as an alternative, they tried to use a sleeper, but it wasn’t suitable as the jacks were not level and the idea was abandoned. Jacking up the engine is required so the reversing shaft weigh shaft housing fitted bolts can be removed and the bottom brass and housing taken out as they need white metalling and machining. Alternative methods of trying to remove the brass were tried but nothing worked.

Lunch was had around the stove with the four and Zack the dog.

The J27 was brought back later in the day after washing out. The sleeve on the T2 regulator rod has now been welded onto the rod but it will still require some more work. 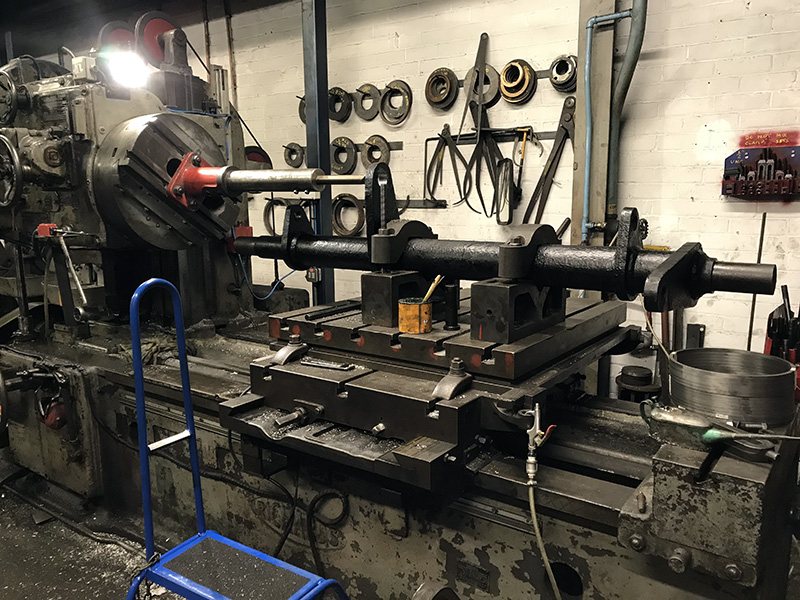 Down at the MPD, the tender weigh shaft has been machined and is ready for fitting next week.