Steady progress was made, with Richard undoing bolts on the cladding and getting it ready for removal while Nigel removed the last of the concrete in the smokebox. All the studs that hold the smokebox to the saddle will be burnt off sometime shortly. Bill was busy removing the left hand timber seating and framework to allow access to the bolts holding the two halves of the cab together. About half the countersunk bolts were removed on this side. Ian meanwhile was logging and labelling parts to start with, and then assisting Richard with the cladding and Nigel in the smokebox. The B1 tender was moved a short distance south to allow the cladding to be stored on No 6 Road. The first sheet Richard removed is marked 'top firebox' and sits on top of the boiler between sheets '5 left' and '5 right'. These are now stored on No 6 Road. 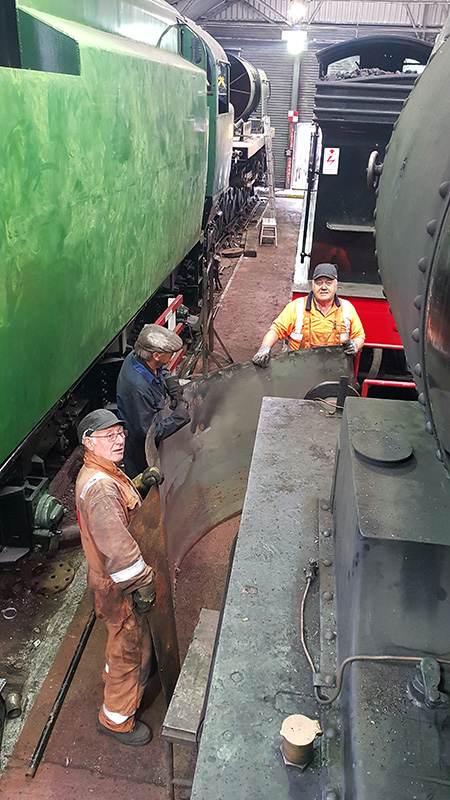 After lunch (held on the picnic benches outside), Nigel did the monthly defibrillator check in my continuing absence. He had also brought the little end brasses from Ian Storey’s workshop. Jon Bradley called in to deliver the new kitchen unit and sink, and Gordon Wells brought the new water heater. These are to be fitted later with a worktop which Carolyn Green is supplying next Tuesday (see photo of now empty space into which they will be fitted). Back on the engine, Richard had removed the top cladding bolts on No 4 cladding sheet. This sheet was quite difficult to remove as it had been pop riveted, but it proved possible to drag the sheet out far enough to chop off the pop rivets and remove the sheet in 2 halves. These are marked '4 left' and '4 right' and are stacked on No6 Road with the others (see photo of '4 left' being moved). A start was made on cladding sheet No 3 but removal was left for the following day.

Steve and Nigel spent all day in the cab following on from Bill’s work the previous day, and removed the remaining countersunk bolts which hold the two sections of the cab together, and the timber structure on the right hand side that holds the driver's seat in place. This timber surround, when dismantled, allows access to the countersunk nuts and bolts. Both left and right cab side had all the bolts removed by the end of the day. Nigel had to remove the filler that covers the countersunk head to allow an allan key to loosen the nut from the bolt. Ed and Ian set about removing the front 3 sections of cladding: not an easy task as none of the top cup head screws would move so they had to chisel off the 24 screw heads. Then, underneath, they found the self tapping screws which hold the two sections of cladding sheet together, wouldn't move either so they also had to be chiselled off. By the end of the day, alln3 cladding sheets were split, making 6 pieces, and removed and stored on No 6 Road. Gordon, Jon and Bill called in for a short while to attend to a few small jobs on the new washing facilities. 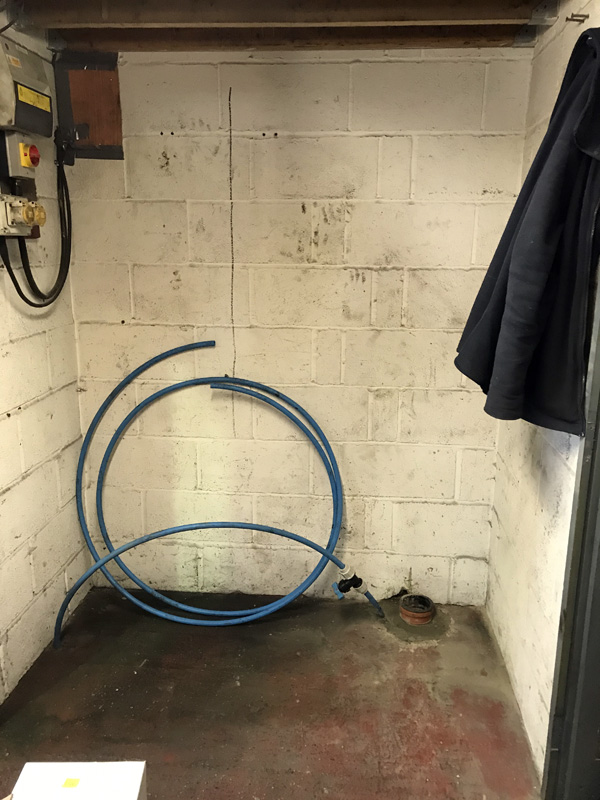