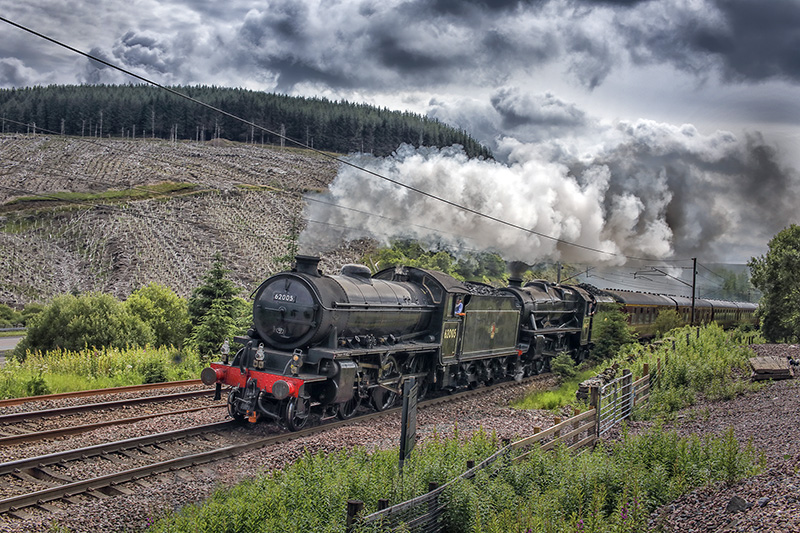 This is to confirm that the K1 is now safely at Fort William, ready for the start of its season on the Jacobite on 19 July.

This follows an intensive period of work by Paul Hutchinson and his team at Carnforth once the Covid 19 restrictions were eased. Following a successful steam test for the boiler inspector on 3 July, the K1 was due a test run round the Hellifield circle on 10 July. However, when ready to depart the yard in the morning, the AWS failed. Thanks to the efforts of Richard Pearson and others, this was finally resolved and the locomotive finally set off in the early evening and completed its test run satisfactorily. It was then due to leave for Fort William on Sunday12 July, but a last minute change of plan saw it depart for Carlisle on the Saturday afternoon with 45407 and the ECS (without a Class 37 on the front as originally intended), as I discovered when I was told it was standing at Carlisle Citadel Station in the late afternoon.

The consist then left for Fort William on the Sunday at 0958, again without a Class 37, and arrived at there at 2024, just under an hour late. Attached is a photo by Brian Nunn on the climb to Beattock Summit.

No further problems with the K1 following the AWS dificulty on Friday, so hopefully that has now been resolved. Yesterday, the locomotive was coaled and watered and checked over. In addition, the pit was cleaned and the water removed and the site generally sorted out in conjunction with Riley's men. The welfare unit has been plumbed in, so the support crews have the required separate toilet and washing facilities, and will be able to overnight in the support coach. Today there was to be a full safety briefing with the service starting tomorrow with the Black Five.

The K1 has its first week starting on Sunday as planned and is then due to run the weeks beginning 2/16/30 August, with a washout due to start week beginning 6 September before it returns.