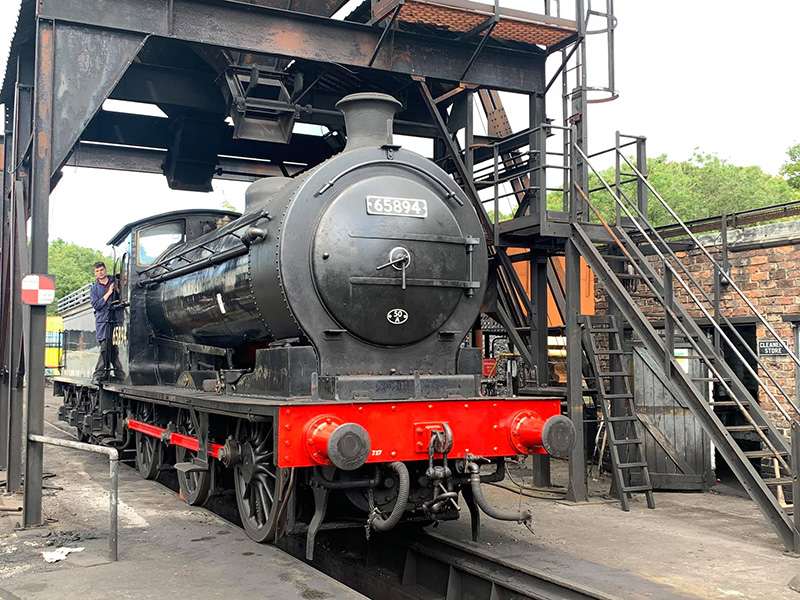 As some will be aware, the J27 was due to have a steam test last Friday,17 July, following the fitting of a new right hand injector steam valve. Chris Henwood reports that the J27 was shunted and had a warming fire lit on the Thursday as planned. The locomotive performed satisfactorily in its steam test, but a suspicious 'knock' from the bottom end was picked up as the locomotive was on its way to the pit to be disposed.This turned out to be due to excessive side to side movement on the little end of the right hand connecting rod, and closer inspection revealed a loose bush in the rod. Its planned running in turn for today was therefore postponed.

Yesterday, the connecting rod was disconnected and lowered out of the frames, revealing the bush was well and truly free of the rod. Measurements were taken of the crosshead, rod end and little end pin as a reference for the repair. The MPD has sourced suitable material for a new bush and this will hopefully be turned and push fitted this week. Following this, Chris will arrange a small working party to refit the rod: he will contact direct those required. The running in turn will then be rescheduled, following which the locomotive should be available for traffic.

In the working party report of 3 July, there was reference to the rods being cleaned. Subsequently, following consultation with Richard Pearson, it was decided to paint the rods red. There is photographic evidence that 65894's rods were painted red during its BR days in the early 1960s at York, and it was felt that the paint would ultimately provide protection from further corrosion and pitting, which it has suffered from for two seasons running. A photograph is attached of the J27 under the Grosmont coaling plant on 16 July 2020 as it now appears.