Ian reports that Tuesday at Grosmont was fine and sunny with Bill Dobson, Richard De Sadeleer, Nigel Bill, and Ian himself in attendance. Nigel brought a sack barrow donated by  Nigel Hall to whom many thanks.

Richard and Nigel removed the remaining old insulation from No 6 Road to the skip, then moved all the boiler bands from the walkway into the 4 foot on No 6 Road, followed by sweeping the walkway. Richard and Ian then removed nearly all of the outstanding copper pipe fittings in the cab, along with the back damper handle and front sands operating rod. All these items have been labelled and logged. Bill worked all day fitting into the con rods the little end brass bushes which were recently made by Ian Storey. Nigel removed the left and right trailing brass oil boxes which he cleaned and stored upstairs.

NESS came in to repair No 7 roller shutter door which Ian had reported as faulty to Bryan last week. The door was snagging on the way down making it difficult to close. It is working fine now but the door engineer said it may need a new side channel runner. The door closed without a problem when work had finished for the day. Later in the afternoon, Jon Bradley and Gordon Wells came in later to work on the the washing facilities, as a result of which there is now a cupboard on the wall and running hot and cold water (see photo). Jon also painted the unit doors to be fitted next week. 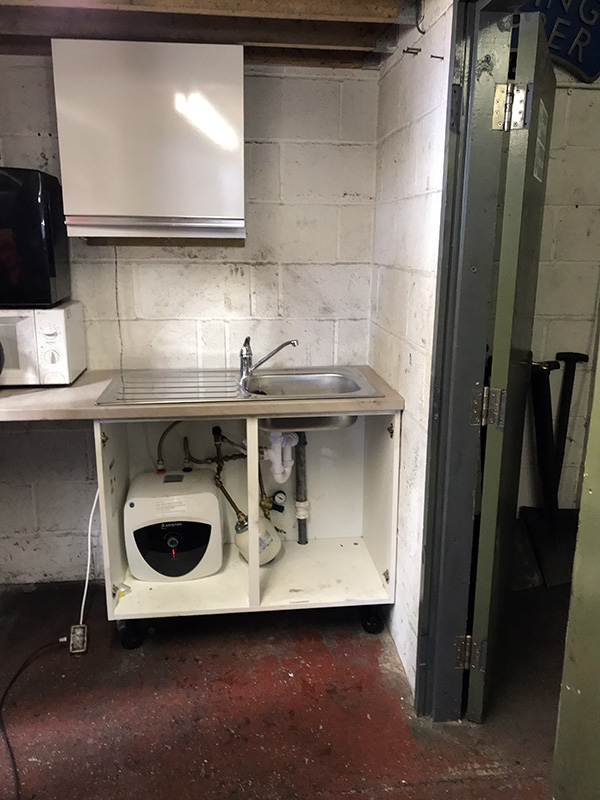 Elsewhere on the Railway, there was shadow running of trains on Tuesday to Whitby and Pickering with Repton No. 926 and diesel Class 25 D7628 for crew refresher training.

On Wednesday it was slightly overcast day with Steve Hyman, Ed Bolam and Ian present.

Steve and Ian spent most of the day removing the back head cladding, blower steam pipe, boiler gauge pressure pipe, tea tray, and the steam brake to manifold pipe - along with some very stubborn bolts. The attached photo shows the current stripped down state of the backhead. Ed spent all day cleaning all the muck off various pipes and cladding. All the cladding items are now stored on No 6 Road. The wooden gauge mounts are stored upstairs above the workshop. Insulation from the back head was removed to the skip. 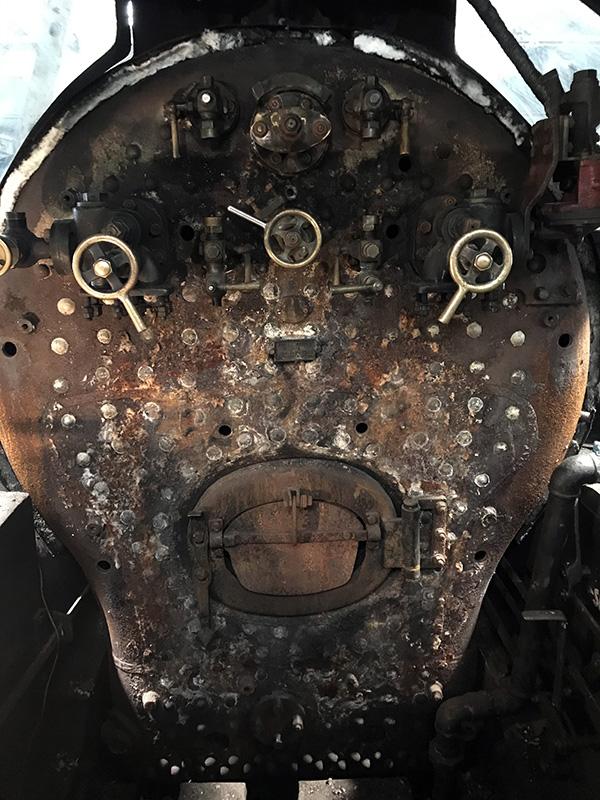 Lunch was had in Deviation shed due to a shower of rain, and Kevin Gould called after lunch with a gauge frame protector from Class J25 No 65645 which he has given to NELPG. This will be a spare for the Q6 or J27. The story behind its saving will be in issue 3 of the e-newsletter in September.

The S15 No 825 was in steam banking the 10.30 Grosmont to Pickering and back on a test run with Repton as train engine, and TV was at Pickering to interview Chris Price about the re-opening of the Railway, with the train standing in the background.

Up in Scotland, it is reported that, apart from the rain, the K1 is running fine with no problems, and you will have seen yesterday's photo from James Pearcy of it at Fort William carrying a wreath in memory of friends and colleagues lost this year. Passenger numbers are apparently increasing as the week progresses, with 206 on Tuesday and 150 on the first day of K1 running. Paul will provide a full report on the week once he gets back at the weekend.