Between them all, quite a lot of items were removed on Tuesday - steam brake, cylinder cock rod, reversing indicator rod, steam reverser direction rod, steam pipe from manifold to ejector, and cab manifold cover. Paul Jameson spent all day drilling out a sheared cab cladding bolt and re tapped it. Then two studs on the right hand side tea tray which sheared while dismantling the cab cladding last week were drilled out. The top one has been tapped. Richard de Sadeleer drilled out lots of sheared small bolts from a long section of crinoline that was removed from the boiler top. Bill Dobson measured up the cylinder covers and is ordering new copper rings.

Jon Bradley also came in and worked in the new washing area, fitting a cupboard and mirror and cupboard doors (see photo). All that remains now is tiling of the splash back, which Bryan Orange has said he will do, and the job will be complete. A big improvement to the faciliities in Deviation Shed, so many thanks to everyone involved in getting the job done. Come October of course, we will need to remember to fit an additional water valve in the manhole outside the cleaners store to ensure we don't have the water supply cut off when the NYMR isolate the coaling plant water supply over winter to stop its water pipes from freezing up! 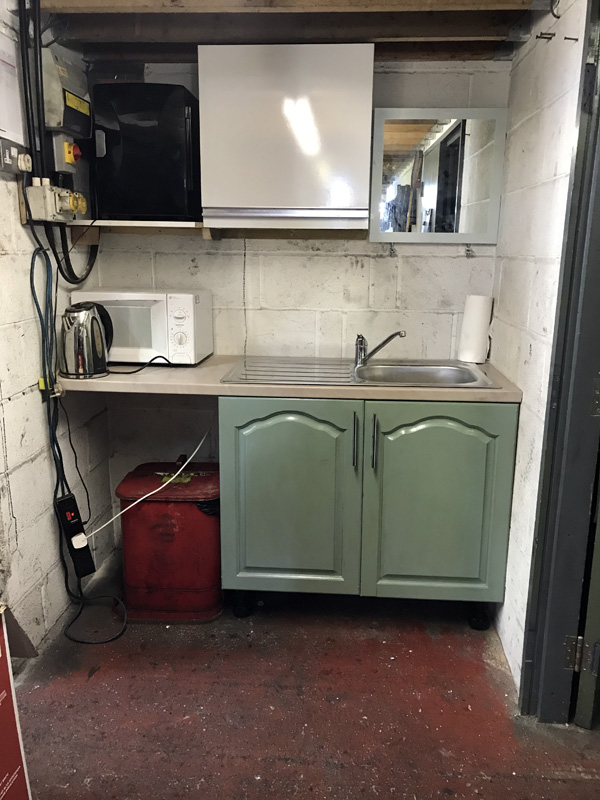 On Wednesday, Ian Pearson and Paul Jameson removed the rear section of the fire grate, and then the vacuum train pipe section from the cab to allow access to another sheared cladding bolt which Paul Jameson drilled out and re tapped. Steve Hyman continued where Richard de Sadeleer left off on Tuesday, redrilling and tapping with a 5/16 Whitworth tap on the section of crinoline, with still quite a few holes left to deal with. Ed spent all day cleaning, rubbing down, and painting with red oxide, the vacuum pipe that had been removed earlier and the back plate tea tray. Most items removed over the last two days have been logged and labelled and put into store. Lunch was had alfresco on the picnic table overlooking the shed with No29 on steam test.

All the fire extinguishers have been checked and examined. Both Propane and Oxygen bottles have been changed from BOC to NeeGas. All departments on the Railway are now using NeeGas.

There were quite a few visitors around this Wednesday. Services are due to restart on Saturday (Yorkshire Day), with shuttles running from Pickering/Levisham and Grosmont/MP18, but remember, trains will not be stopping at intermediate stations and there will be no access to platforms at any stations other than for booked passengers and rostered staff/volunteers.