Another busy week at Grosmont.

On Monday, Bryan Orange and Luke Perry tiled the splashback for the new sink unit in Deviation Shed (see photo). That took most of the day to complete as the mirror had to be moved up about 3 inches higher so that the tiles didn't have to be nibbled round to make them fit. The final job was to connect the already provided cable to a power supply so that the upstairs emergency escape light fitting worked. That job was done and there is now full compliance with escape fittings in Deviation Shed. 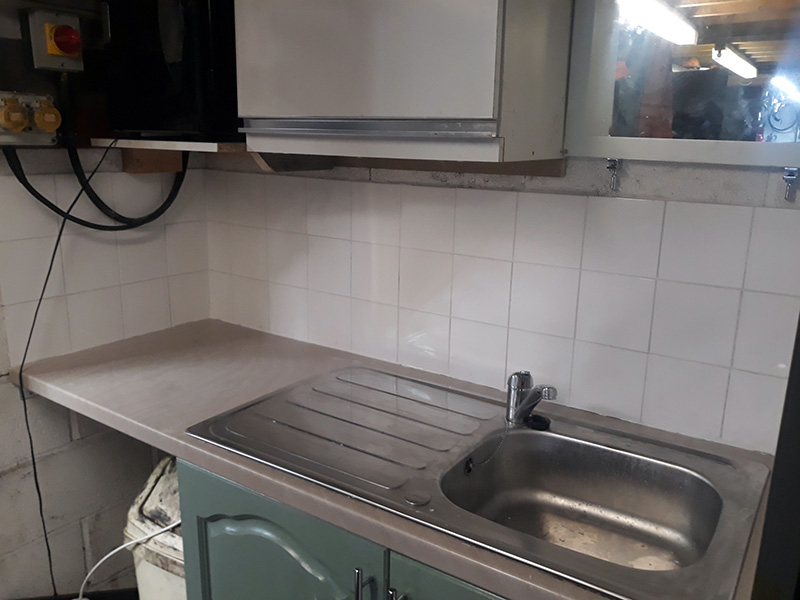 A windy, rainy Tuesday saw Trevor Wilford, Nigel Bill, Bill Dobson and Richard De Sadeleer joined by Ian Pearson just in time for lunch after having a medical with Dr Dallara at Loftus. Bill spent most of the day making valve joints for safety valves, whistle valve and reversing valve, while Trevor concentrated on annealing copper pipe work. Some defects were found on some of the pipes, mainly cracks in the copper, and these may need replacing. Nigel and Richard, after assisting Trevor setting up the copper pipes for annealing, drilled out the two broken studs on the back plate which hold the right hand side of the tea tray to the back plate. This was the job that Paul Jameson started last week and took all day to finish. Ian removed the annealed copper pipe back upstairs in the workshop for storage, with some relabelling where necessary and marking up some items for rectification.

The J27 was also on shed that day, having been taken out of traffic, reportedly with leaking valve covers, although I also heard that there was an issue with the lubricator mechanism. Either way, the problems were regarded as minor, quickly rectified, and it apparently returned to duty on the Grosmont/MP18 shuttles that day and Wednesday. Today it was back at Pickering, although it is being stabled at Grosmont overnight, running down to Pickering in the morning, working the shuttles during the day and then being dropped off the last one at Levisham and running back to Grosmont. The train is then taken back to Pickering with the 08 diesel shunter which is topping and tailing.

In contrast, Wednesday was a warm cloudy day with Steve Hyman, Ed Bolam, Trevor Wilford, Nigel Hall, and Ian Pearson, with Jon Bradley present until lunchtime, sealing round the new worktop. On the Q6, Steve chipped out the filler where the top end of the cab meets the bottom end and it is now ready for removal. Trevor continued annealing the copper pipes (there are now only a few left to do), while Ed and Ian spent most of the day cleaning the annealed pipes. These are about 50% done. Ian, Steve and Ed then removed all the cladding which was stored on No 6 Road onto No 7 Road on timber supports, to allow access for the removal of Lambton Tank No 5 next week.

Meanwhile, Nigel Hall concentrated on sanding down all the right hand side of the tender and most of the left side, in preparation for the return of the Q6 to BR livery. He plans to complete it next week, much to the irritation of that true NER officianado, Chris Cubitt, who on seeing the North Eastern livery disappearing from the tender, castigated the operation and person responsible and apparently had the following exchange with Barney :-

Chris Cubitt to Barney: “He’s not following the MPD method statement for the painting of BR liveries.”
Barney: “Why, what’s it say?”
Chris Cubitt: “Don’t!”

Can't really follow that, other than to say that next week's working parties will be on Tuesday 11 August with Bill Dobson, Ian Pearson, Trevor Wilford, Richard de Sadeleer and Nigel Hall, and on Wednesday 12 August with Ian Pearson, Steve Hyman, Nigel Bill and Ed Bolam.

Remember, the virus is still around, so take care and keep safe.