A misty muggy morning but getting very hot and humid later at Grosmont on Tuesday, with Bill Dobson, Richard De Sadeleer, Trevor Wilford, Nigel Hall and Ian Pearson in attendance

To start with, Ian set up the air line from our compressor, Bill borrowed a grinding tool from the MPD and ground small amount out of the newly machined little end bush to make it a better fit, while Richard set about cleaning more copper pipes and Trevor completed annealing the rest of the pipe work. Nigel Hall completed rubbing down the tender and has primed the tender handrails .

It was so hot at lunchtime only Richard and Ian braved lunch outside, the others lunched in Deviation shed. Gordon Wells came and connected a new switch for the water heater.

After lunch, Bill and Ian investigated drilling and tapping the sheared off studs which hold the right hand side of the tea tray. The smaller mag drill was borrowed from the MPD but it was then realised that the mag drill would not sit square on the backplate. To do this, a piece of steel plate would have to be tacked onto the backplate and, as no-one had any experience of doing this, Bill decided to contract the job out to the MPD staff. Trevor made a start on rectifying a section of backplate which fits around the centre lower area and round the fire hole door (see photo). Later, Bill repacked the steam brake valve and refitted it, before removing the steam valve from the manifold to the ejector, repacking it and then refitting that. Separately, Ian removed the steam supply valve from the manifold to the pressure gauge, repacked it and refitted that as well. 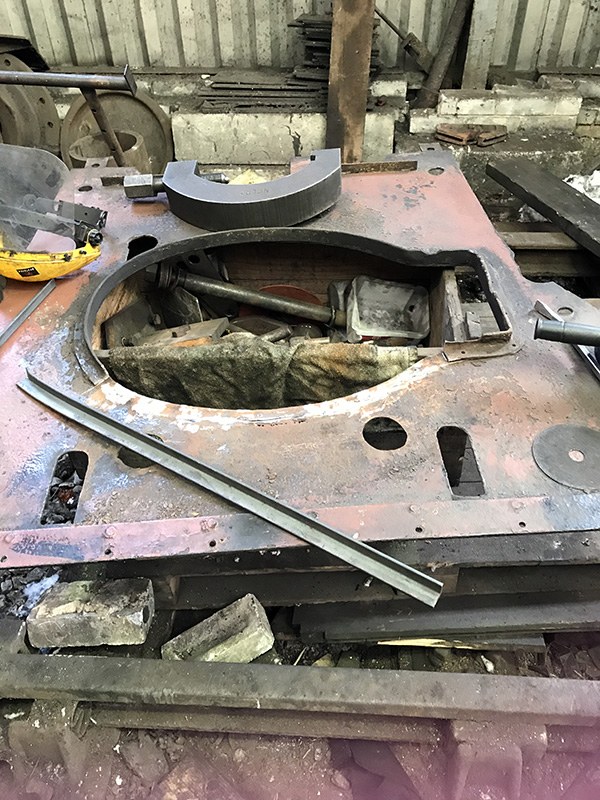 On Tuesday, the J27 was topping and tailing with the 9F between Grosmont and MP18 (see photo), while No 5 was finally shunted outside of Deviation Shed by Chris Cubitt and Charlie Wood with help from Richard (see photo). Subsequent shunting saw the Standard Tank 80135 put back at the rear of Deviation Shed with the B1 tender on top. 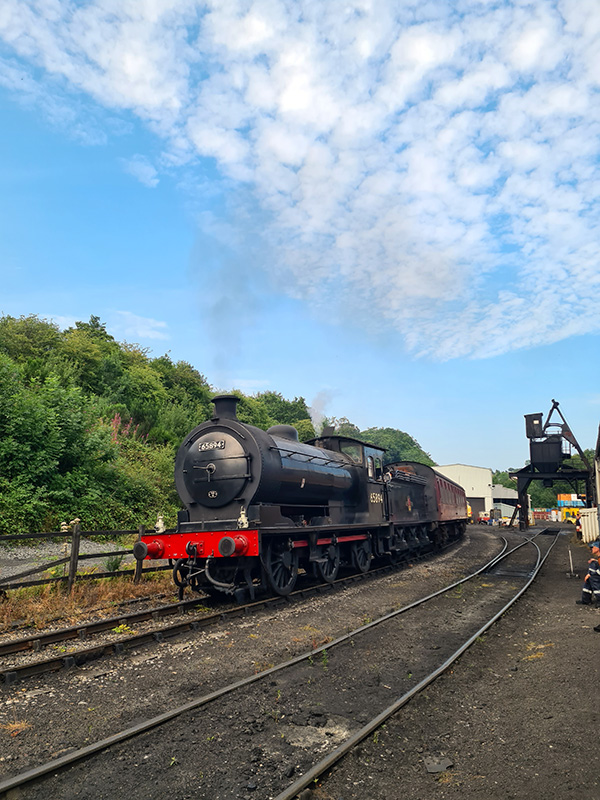 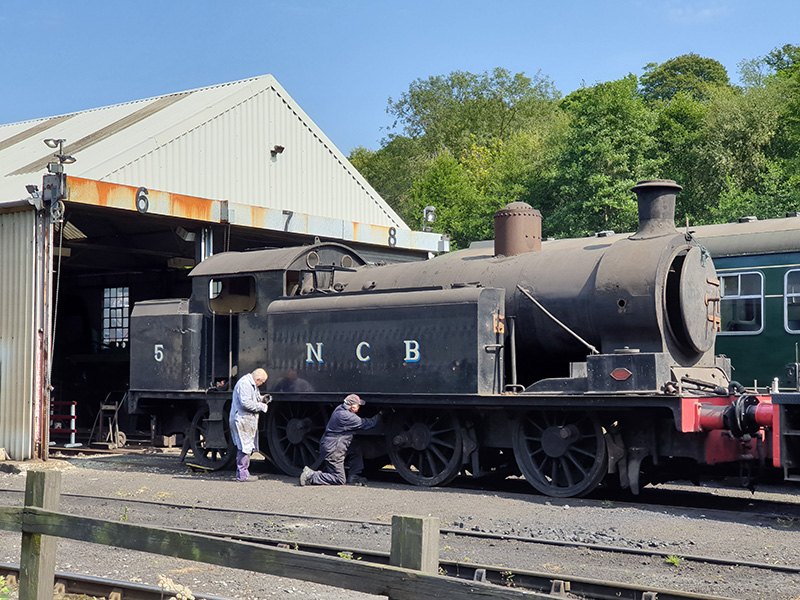 Wednesday was another warm muggy day with some mist at times. Steve Hyman, Ed Bolam and Ian Pearson made it but no Nigel Bill as he was incapacitated. Now that No 5 has been shunted outside, the three musketeers moved all the cladding sheets back onto the spare space on No 6 Road, leaving No 7 Road clear for moving the Q6 out for its boiler lift. Steve worked in the cab most of the day repacking the steam heat valve, top manifold valve to blower, and the blower valve itself. Steve had also done quite a bit of work at home, updating the inventory system of parts taken off the locomotive. Ed spent all day cleaning copper pipe work, with some help from Ian. Ian though spent a lot of time upstairs in the workshop, making more space on the shelves in No 8 Bay, re-organising removed items onto the middle shelf, and stacking cleaned copper pipework onto the top shelf.

Lunch was had alfresco on the bench outside Deviation Shed, watching No 5 having its sand boxes and side tanks removed. The J27 was topping and tailing with the 9F once more.

Next week’s working parties will be on Tuesday 18 August with Bill Dobson, Trevor Wilford and Nigel Hall (Ian will not be available as he will driving that day), and on Wednesday 19 August with Ian Pearson, Steve Hyman and Ed Bolam.

The NYMR timetable changes next week. Tomorrow sees the last of the two shuttle services, with no services on Saturday or Sunday to give time to prepare for a daily, two train, through service from Pickering to Whitby, starting on Monday until 13 September. The services will leave Pickering at 0920 (and leaving Whitby at 1400), and 1200 (leaving Whitby at 1630). They will not stop at any intermediate stations. Subject to availability they will be steam hauled throughout.