The 19th September was the J27's 90th birthday. We marked the occasion at Hopetown with a cake and cup of tea. Leona White - Hannant, The Curator at North Road Museum, kindly prepared a press release to accompany the event. 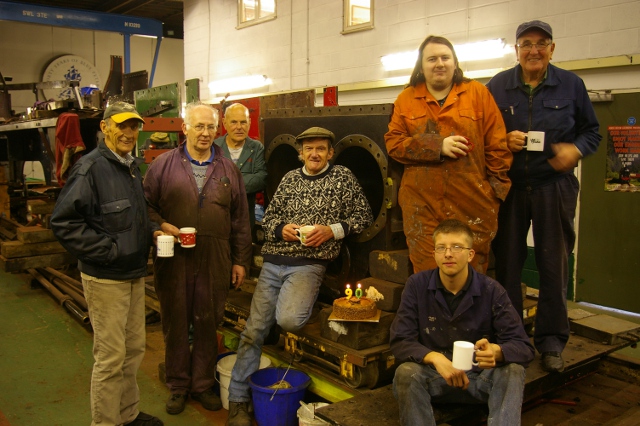 On Thursday 19th September the North Eastern Locomotive Preservation Group Thursday daytime volunteers marked the 90th birthday of NER Class P3 No 2392 with a birthday cake and a toast – of tea of course: no alcohol allowed on site! Currently undergoing its latest 10 year overhaul at Hopetown carriage works it is hoped that the locomotive will be back operating on its centenary in 2023, which can then be celebrated in style!

On 19th September 1923, NER Class P3 No 2392, an 0-6-0 freight locomotive, was outshopped from Darlington North Road Locomotive Works, the last of its class, although actually built by the LNER following the Grouping earlier that year. Those Works of course are no more, being replaced by Morrison’s supermarket. The P3 though, which ended up as BR Class J27 No 65894, still survives. It worked on the railway for 44 years, spending most of its life at York, but finally moving to Sunderland before being withdrawn in September 1967. It was then bought by the North Eastern Locomotive Preservation Group (NELPG) for preservation and has been in their possession for 46 years - longer than its time on the big railway. Initially overhauled on Teesside, it was moved to the North Yorkshire Moors Railway (NYMR) in 1971 where it worked the re-opening Royal train on 3 May 1973. Providing the mainstay of steam hauled services on the NYMR in its initial years of operation, the locomotive has also worked on other heritage railways around the country.

The Hopetown carriage works are open to visitors from 11am to 4pm on the third Saturday of each month, the next Open Day being Saturday 19 October.

Councillor Nick Wallis, Darlington Borough Council’s Cabinet Member for Leisure and Local Environment said ‘It’s great that NELPG have managed to maintain this piece of Darlington’s history, and even better that the 90 year old locomotive is able to be visited by the public. Thanks to the hardworking volunteers who have made this happen.’