Ian reports heavy rain storms most of the day at Grosmont on Tuesday, but Richard De Sadeleer, Trevor Wilford, Nigel Hall and Ian himself were in attendance. The planned Q6 boiler lift did not take place in the end. Apart from the weather, there was a problem with the crane hire company. Bill is going to contact another crane hire company, as everything is now ready for the lift, in the hope it can be done next week. 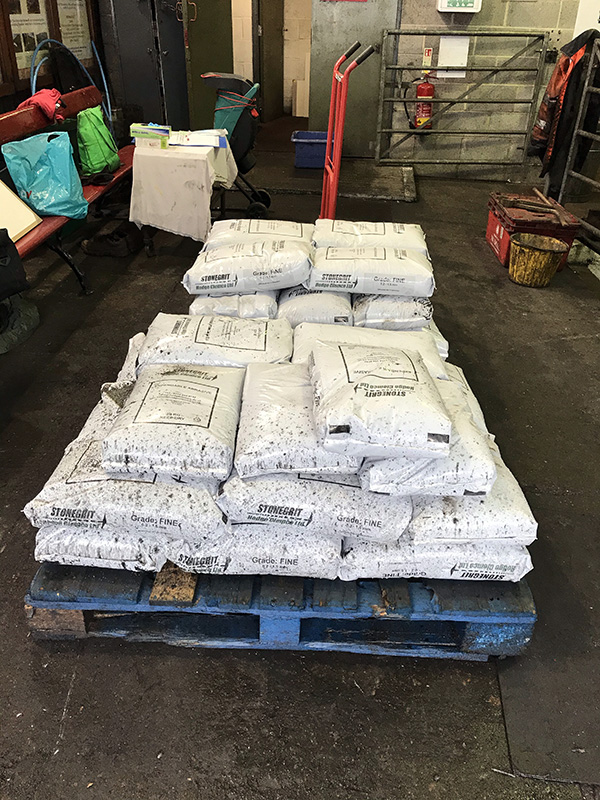 A ton of shot blast material was delivered on Monday and was brought up into Deviation Shed on two pallets with the JCB front loader. Space had to be made at the entrance to the Shed to accommodate the pallets (see photo), by removing various items which are now stored at the side of No 6 Road. All the boiler plugs fitted last week were changed for old ones by Richard, so the originals do not get damaged when the boiler is shot blasted. Trevor annealed the smokebox blower pipe and then continued with the damaged lower back head sheet. The damaged section was cut out (see photo), and will be replaced with new material next week. Nigel fitted a BR transfer onto the left hand side of the tender, so it is now a Q6 rather than a T2 (sorry Chris). Only one transfer was in the packet however, so Nigel is ordering another for the right hand side. Some tidying up was done in the workshop. Gordon Wells came in later in the morning and completed fitting a couple of electrical sockets in the washing area. 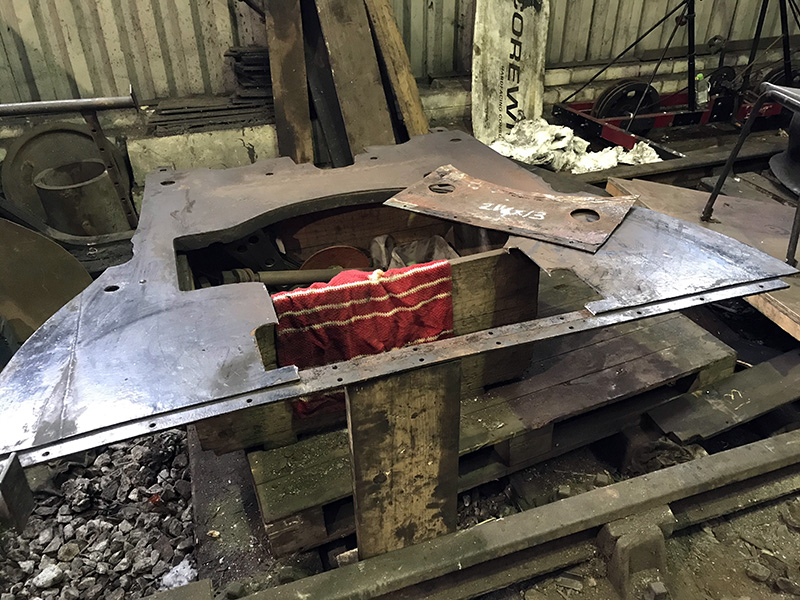 Wednesday was a better day weather wise, with brighter spells later in the morning and no rain. Steve Hyman, Ed Bolam, Bill Dobson and Ian were present.

A blank was brought from Hopetown and fitted by Steve to the back safety valve boss. A concentrated effort moved quite a few heavy items from around the buffer stops on No 8 Road to the side of No 6 Road. Ed gave the rocking grate mechanism a coat of red oxide, and also cleaned some nuts and bolts from the injector pipework. Steve and Ian took all the blast pipe spark arrester steel fittings down to the shot blaster at the MPD and cleaned the rust off them all. There are some odd pieces of bolts still to drill out and this will be done next week. Bill has been busy investigating the fitting of atomisers on the Q6 and these will be ordered shortly.

Meanwhile, the J27 has had a water change and is now available for traffic as spare engine. Repton, the 9F and the Class 25 are working the twice daily Pickering - Whitby trains, with the 9F double heading with Repton on the evening return to Pickering to avoid slippage and delays because of the heavy trains and wet and greasy rails on the 1 in 49. As a result, Grosmont to Goathland is being done very promptly! This service runs until 27 September. Whether any operating changes will be made to include services to intermediate stations remains to be seen, but when the J27 does return to service, it has 7 days operation before needing to be stopped for a 28 day washout and steam test. Although officially a job for the NYMR MPD, given their reduced staffing, Chris Henwood is hoping to get an NELPG team together to do the work, assisting a foreman or boilersmith. So if you want to be involved, look out for emails inviting volunteers once the timing is clearer.

Lucy has also been observed in steam outside No 5 Road with Piglet in charge.