Just had a report from Ian Pearson about the successful Q6 boiler lift at Grosmont on a damp and grey Monday, with Bill Dobson, Richard De Sadeleer, Chris Wakefield, Nigel Bill and Ian himself. Assistance was also received from MPD staff Paul Whickham, Chris Kelley and Shaun Bowler for which many thanks. 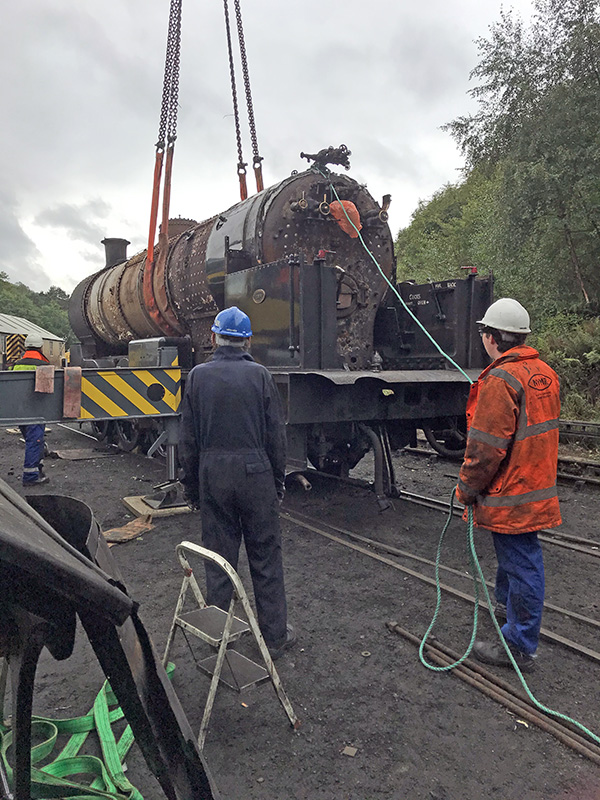 The road crane arrived at 0830 but had to wait until 1030 for the morning train from Pickering to pass, after which a protection was put on the line and lifting could start. This gave Ian and Richard De Sadeleer time to prep the 08 shunter and move the 2 DMU power cars and 1 trailer car from No 7 Road onto No 9 Road. They had to be moved individually as there is a gearbox drive shaft fault on one of the power cars. Once these were removed from No 7 Road, Deviation Shed could be accessed, and the Q6 moved down to the MPD exit road. By this time the road crane was set up and in position on No 2 Road.

First lift was removing the cab, but, unfortunately, there were 3 bolts still securing it. These were soon cut off with an angle grinder however, and the cab removed. Then the strops were put around the boiler and various adjustments made to get the lift fairly straight (see photo). But the boiler would not move at the cab end, and when the cab was checked underneath, it was found that the diaphragm/expansion plate was still bolted through the ash pan and into the frames with 8 rusted in bolts. After several unsuccessful attempts to remove the bolts with a pneumatic wrench, it was abandoned and the burning gear was brought into action. With Richard De Sadeleer in the firebox, he burnt off all the heads of the bolts and then tried to knock out the remains of the bolt - but only managed one. Paul Wickham then went in with a pneumatic hammer and knocked out the rest of the bolts. By this time though, the possession had been lost and trains were passing. So from about 1245 until 1435 no lifting could take place.

Eventually, the boiler was successfully lifted out of the frames, and with Nigel Bill and Chris Wakefield guiding it with ropes, it was placed on packing set up by the MPD staff. With the the boiler on the packing but secured with the strops, the ash pan had to be removed. This turned into another long job, as the securing cotters had to be hammered out so far, then cut with an angle grinder, and some remaining pieces needing to be chiseled out. Eventually it dropped off and was dragged from underneath the boiler to the side using the JCB front loader. By 1715, clearing up was under way, the loco frames were shunted off, the crane crew got their vehicle ready for moving off site, and all the tools were returned to our workshop. By 1800 everyone left for home, after a very long, but eventually successful, day.

Next comes the sand blasting of the boiler, NDT testing and then the external exam by the boiler inspector.

On the Railway, the NYMR has now announced that, in addition to the two daily Pickering - Whitby trains, a steam hauled Rail Trail shuttle service will run between Grosmont and Goathland from next Monday, 14 September, until 1 November. It will leave Grosmont at 1100 and 1330, returning at 1215 and 1455 respectively. It will give some time to explore Goathland village, or walk the Rail Trail. Although subject to confirmation and availability, the main motive power is expected to be the J27 and No 29.