Sean Bowler was working at the shed and offered to set up the sand blasting equipment and do all the sand blasting required, which was a great help as there is only one special suit and there was a need to avoid sharing it with others. The sand blasting went fine for a while until the compressor failed. Sean did manage to get it going after some considerable time, but it failed again so little progress was made.

After several attempts with the compressor and the sand blast container and cleaning its workings, it still wouldn’t work, so it was abandoned until Wednesday. However, Nigel and Bill managed to clean a lot of heavy rust from around the outside of the boiler in the firebox area. Ian and Richard spent all morning shunting the Q6 frames from No 2 Road to the pit to get the cab put back on, and then back into Deviation Shed, while Trevor Wilford continued with fabricating the back plate.

After lunch Richard started to remove concrete from the smokebox saddle.

While looking round the frames it was noticed that the vacuum and steam heat pipes had got bent during the boiler lift. These were noted for straightening or replacement on Wednesday. Bill acquired some replacement bolts for the ash pan/diaphragm plate which had been burnt off before the boiler lift. 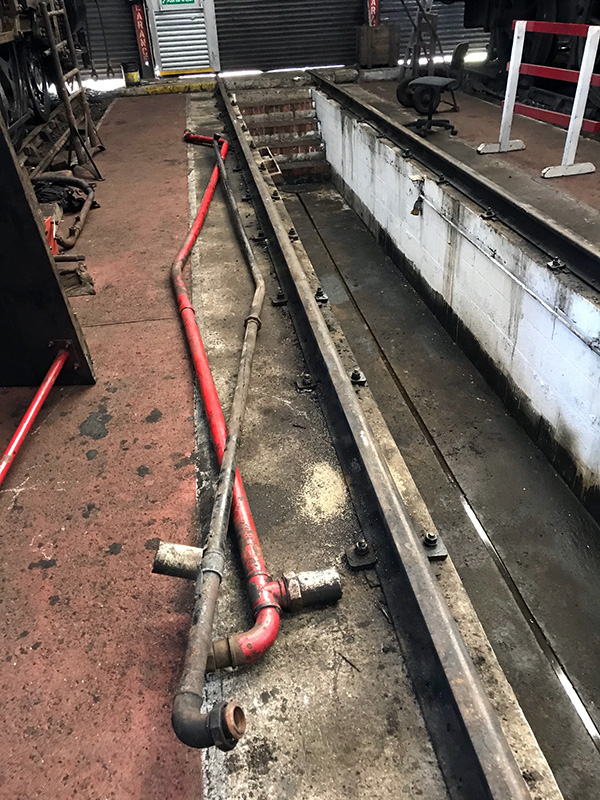 Ian and Nigel brought 4 cladding sheets up from the MPD which had been trapped under the cab prior to its removal. These are now stacked with the others on No 6 Road and are clearly marked up.

Wednesday was another fine sunny day with Steve Hyman, Ed Bolam, Trevor Wilford, and Ian Pearson, with Bill Dobson calling in at lunchtime. Sean Bowler was still trying to get the sand blasting equipment working, but with no progress until the afternoon when a compressor was borrowed from contractors working on the recent rock fall into the River Esk just east of the walk way bridge to the MPD. This is being shored up and netted.

Eventually Sean got some sand blasting done but then the blast gun nozzle broke into pieces and, not surprisingly, this stopped the sand blasting.

Elsewhere, Ian cleared all the ash that was left in the ash pan, while Ed cleared the rest of the concrete and sand from the smokebox saddle. 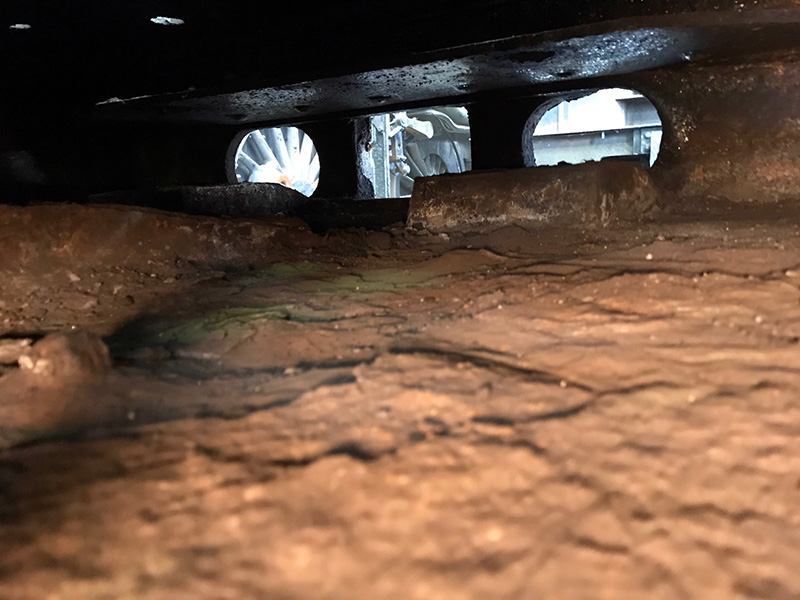 Steve cleaned out all the rubbish and coal from the drag box area and it was noted that the drag box has a lot of heavy rust building up (see photo). During the rest of the day, Steve, Ed and Ian cleaned the frames and removed the vacuum and steam heat pipes which were bent during the boiler lift (see photo). Trevor continued with the fabrication of the backplate cladding and was hoping to complete the job by the end of the day, but, unfortunately, the mig welder failed. It may need replacing - not a good couple of days with the equipment.

The NDT test is booked for next Tuesday, before which the sand blasting has to be completed and the boiler also washed out. Bill plans to work on these over the next couple of days.

Lucie was in steam during the day and was taken out for a trip up the line with Chris Cubitt driving and Richard De Sadeleer firing with Piglet on the footplate.