A very busy time down at Grosmont since the last report with an intense period of work on the Q6 boiler to get it ready for the NDT test yesterday.

It started with a visit to Deviation Shed by Bryan Orange and Luke Perry on Thursday (10 September) to finish converting the fluorescent lighting in the workshop to LED baton fitting. It got off to a bad start though as as the milk had seemingly gone off, so no traditional starting cup of tea. A fter stumbling with an electrical wiring issue, the final 2 workshop fluorescent fittings were eventually replaced with LED baton fittings. All of the old fittings were placed in the rubbish skip. The LED lights provide significantly more lumens (lighting level) and reduce our current consumption. An additional LED fitting was installed above the new sink to light up the area.

Numerous members of the public visited Deviation Shed during the day and the collection box was busy. That prompted Luke to remove the paper money and £1 and 50 pence coins to the tune of £113, which will be transferred to the Treasuruer in due course. Not a bad total bearing in mind the Shed has been closed due to lockdown for all of the main summer season.

Bill Dobson and Ian Pearson popped in late morning. Ian was driving. Bill has asked for a Swarfega wall fixed dispenser and a paper towel wall fitted device to be provided by the sink, and these are now being obtained. 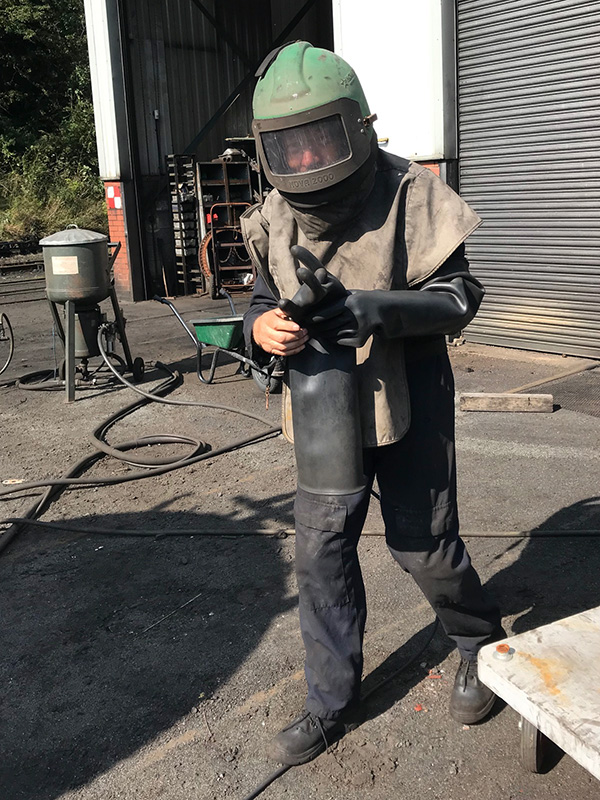 Then on Sunday, Bill and Ian spent the day trying to get on top of the sand blasting process even though the nozzle had broken the previous week and a replacement nozzle promised for last Friday had not turned up. The nozzle was then promised for Monday. As Bill had had the protective suit disinfected so he could do the sand blasting (see photo), attempts were therefore made to do a repair on the nozzle with duct tape. However, this only worked to a certain extent, and for a few minutes only. After about four attempts, renewing the tape each time, it was given up as a bad job.

Only a small area of the firebox had been cleaned, and the sand blasting and boiler washout needed to be completed in time for the NDT inspection on the Tuesday. As a result, Ian Pearson contacted Nigel Bill and Richard De Sadeleer on the Sunbday evening to see if they were free and able to help out on Monday. Both were, so on a very hot Monday, with Bill and Ian, work continued. As the new nozzle for the sand blaster still had not arrived, efforts concentrated on washing out the boiler. After setting up the hoses, and with Nigel Bill doing the washing out, this was completed by mid afternoon. Then we acquired a couple of needle guns were acquired to remove some of the rust, and Nigel stayed until 5pm (see photo) and Richard until 7pm to try and make progress. The new sand blasting nozzle arrived just after 4pm, but by then the compressor wasn’t available - grrr...... 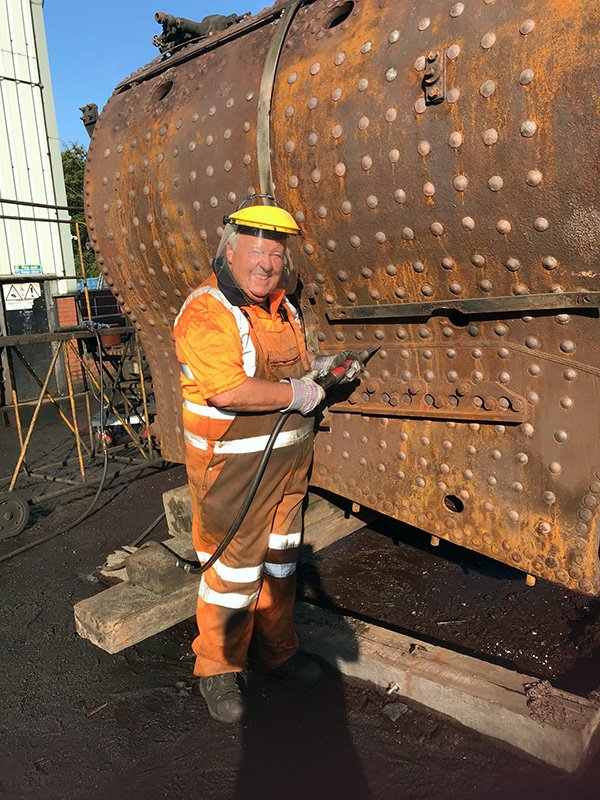 Bill introduced everyone to the NDT inspector at 9 am on site at the MPD and showed him around the boiler. The inspection took about 2 hours and was satisfactory in all respects. A major step forward, and the boiler is now ready for the cold exam by the boiler inspector. Thanks are due to all concerned for their efforts in ensuring that the NDT exam could go ahead as planned. While the exam was under way, Nigel Bill and Bill Dobson set up the compressor and sand blasting equipment to complete the area that never got done the previous day.

In the meantime, Ian and Richard De Sadeleer spent most of the morning shunting with the class 11 shunter, to get the STD tank 80136 from the wheel drops and exchange it with the Q6 frames. This was achieved with help from Chris Cubitt driving the 04 shunter. The Q6 frames ended up on the wheel drops, and the STD tank is in Deviation Shed on No 7 Road. Gordon Wells also called in to repair the welder which failed last week. He found a fault with the fuse holder. This was repaired and the welder is now fully operational again. That was fortunate, as Trevor came in during the afternoon and completed the repair of the backplate. Bill and Jon Bradley completed the sand blasting. Ian, Bill , Nigel and Richard removed the left hand side rods as part of the leading and intermediate wheel removal which will be done shortly.

Wednesday, in contrast, was grey and much cooler for Steve Hyman, Ed Bolam and Ian Pearson. The plan for the day was to sheet over the shot blasted fire box area of the Q6, then take off the right hand side rods and front section of the brake rodding before starting on the removal of both back gear eccentric rods. But as Repton had a broken spring the wheel drops would be needed later on Wednesday evening to change the spring. So Ed and Steve sheeted the sand blasted area (see photo) while Ian went to get Jamie Lazenby the shunter, and the shunter started, so the Q6 frames could be moved back a short way to get the rods on bottom quarter making it easier to remove them. All three then got stuck in and got the rods removed along with the front section of the brake rodding. 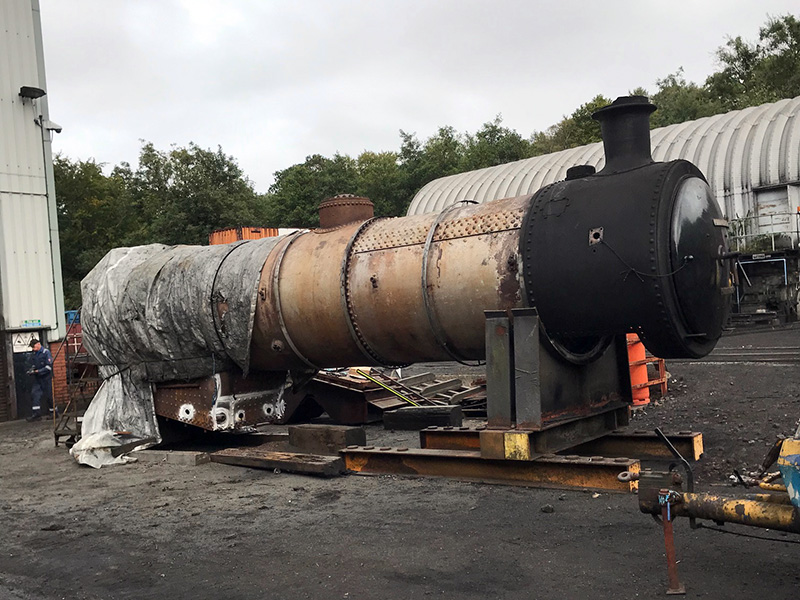 After lunch, Barney helped with the shunting. The frames were moved onto No 8 Road outside Deviation Shed temporarily until they can be put back on the wheel drops. While on No 8 Road, Ed and Ian started cleaning the frames - there’s a lot of dirt to to remove. Steve concentrated on drilling out two sheared bolts which hold the left hand trailing oil pot pipe bracket which feeds the journal. The bracket was removed, cleaned and stored in the workshop upstairs. 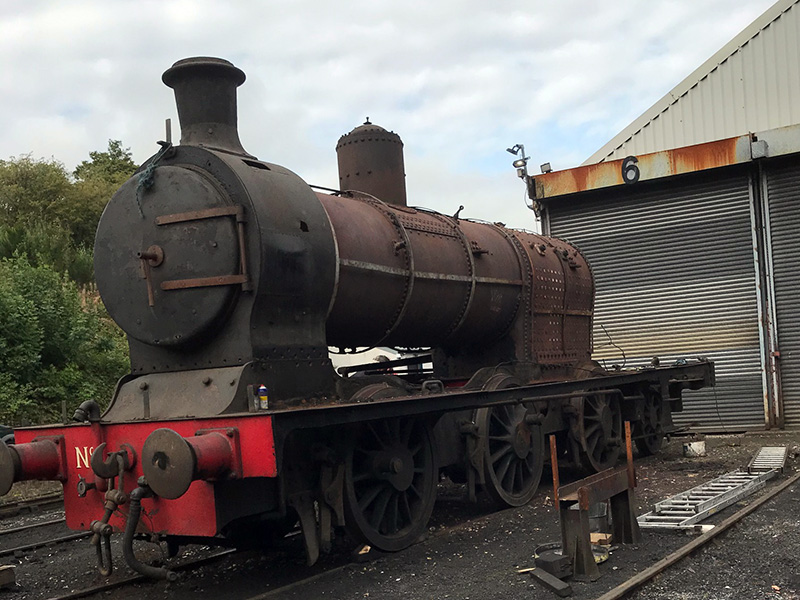 The next working parties will be on Tuesday 22 September with Ian Pearson, Richard De Sadeleer, Nigel Bill and Trevor Wilford rostered, and on Wednesday 23rd for Ian Pearson, Steve Hyman and Ed Bolam.

On the Railway, the Optimist service continues to to run with two return trips each day from Pickering to Whitby, and the Rail Trail service has started with No 29 operating two return trips between Grosmont and Goathland so far this week. No 5 is now ready for its boiler lift (see photo).