On the last day of Summer, it was a lovely fine warm day at Grosmont on Tuesday with Nigel Bill, Richard De Sadeleer, Trevor Wilford and Ian Pearson.

Trevor welded the front damper linkage together that was broken during the boiler lift a couple of weeks ago. Richard did some lathe work, machining 6 rivets to size for the backplate that Trevor has been fabricating. Nigel and Ian started work preparing the left and right bottom eccentric rods for removal. First though, Ian had to get the Class 11 shunter started and move the Q6 frames in position on the wheel drop and also get assistance from Sean Bowler in operating the wheel drops. After removal of cotter and taper pins and nuts it was lunch time, which was had in Deviation shed. During the morning, representatives of the A1 Trust came to Deviation Shed and collected the generator belonging to Kevin Gould and which had been stored in Deviation Shed for many years. Kevin has donated it for use on the new P2 locomotive.

After lunch, Nigel Bill ,Richard De Sadeleer, and Ian Pearson continued with the removal of the both bottom eccentric rods which were cleaned and stored in the wheel drop shed. More cleaning of frames continued while Richard drilled out the two sheared bolts from the rear oil box pipe bracket that Steve Hyman started last week. Paul Jameson and his wife and dog called in during the afternoon and gave us a brand new set of drill bits, for which many thanks to Paul.

In complete contrast, as Autumn formally started, Wednesday was grey, cool and very wet, but Steve Hyman, Ed Bolam and Ian Pearson were present. Also helping out were Sean Bowler from the MPD and Dave Brown from No 5 loco volunteers. Sean offered to help remove the intermediate wheel set as he is passed out on operating the wheel drop. Ian got the shunter started and moved the Q6 frames back over the wheel drop. A start was then made on removing split pins from the spring hangers and horn stay bolts, but they took a long time to remove - there are lots of obstacles in the way of trying to get this wheel set out. By the end of the day, Sean and Dave managed to remove the righthand horn stay but the left one was still to remove. With everyone involved, the four spring hangers were also removed, but, unfortunately, the wheels were still in place. Sean and Dave said they would carry on on Thursday (today).

So today, the left hand intermediate axle box horn stay was tackled. The left hand trailing bolt was very loose into the frame and horn stay but the nut was absolutely tight on the bolt and took several hours to remove. The intermediate wheel set was then finally removed (see photos) by Sean Bowler, Dave Brown and new NELPG member, Robson Hewitson.Our thanks to them for their efforts. 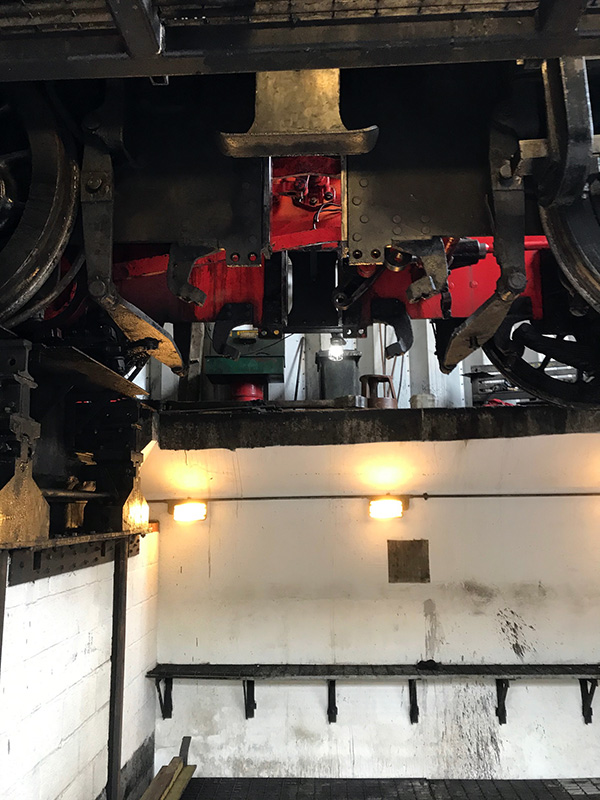 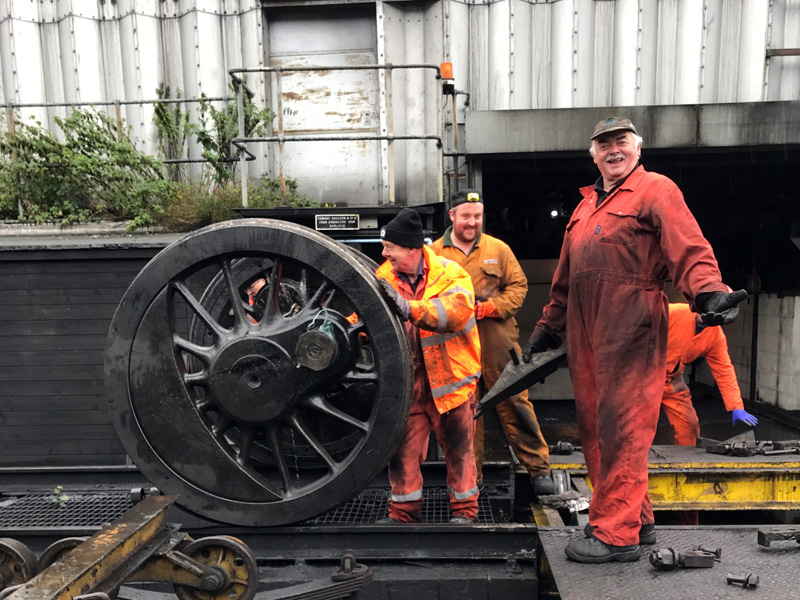 Up to the time of writng, the J27 has continued to work the Rail Trail service this week, two trains per day between Grosmont and Goathland.