Nigel fitted the new pad to the defibrillator and one for the K1 support coach is stored in the case to fit when the coach arrives from Carnforth later in the month. Richard worked on the Q6 frames, sorting out the rear axle box oil pipe bracket, new studs and covers. One of its oil pipes was found to be badly damaged but it was not possible to remove it during the day. Nigel cleaned the intermediate wheel set that was removed last week. Ian spent most of the day cleaning inside the frames while Trevor completed some rivet work on the backplate.

Following the recent Covid 19 restrictions, it has been decided to close Deviation Shed to the public. The roller shutter door remains open during working parties to allow a flow of air through the building, but one of the wooden barriers is placed across the entrance with a closure notice (see photo). 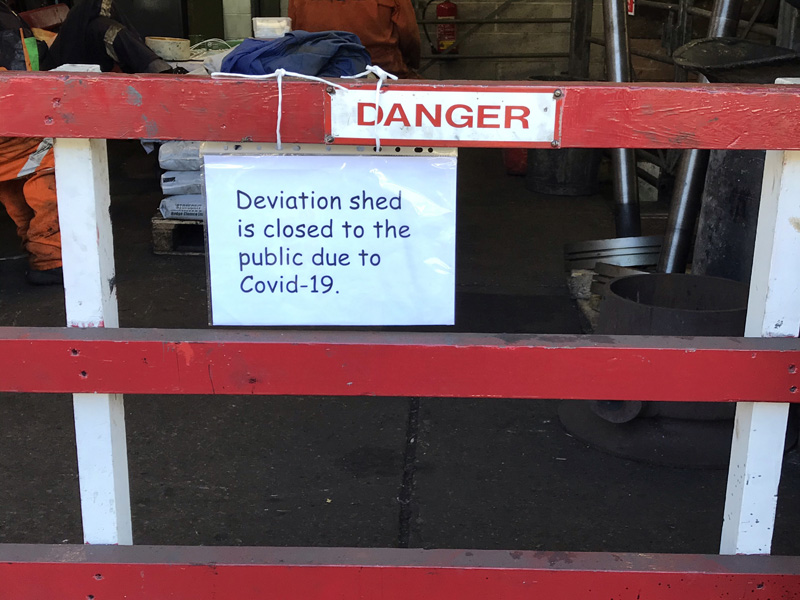 Wednesday was another fine clear morning but clouding in later with the odd shower at lunchtime. Steve Hyman, Nigel Bill and Ian Pearson were present, but Bill came a little later for a couple of hours to organise with Barry Neesom, the machinist working on the Q6 safety valves, the correct dimensions required. Barney, Piglet and Sean from the MPD were involved with the removal of the remaining Q6 wheel sets and the reaming of the reversing weigh shaft housing.

Steve had acquired a hand towel dispenser and paper towels which he fitted in our washing area. Nigel and Ian worked underneath the Q6 frames removing split pins from the spring hangers and horn stays in preparation for wheel removal. Sean Bowler and Dave Brown set up for reaming the reversing shaft housing, but it was soon evident that there was too much motion in the way to allow access of the air tool which operates the reamer. Two pull lifts had to be set up on a beam with lots of timber packing (see photo) which involved everyone to achieve.

After lunch, Ian continued to remove more split pins from the horn stays, and cotters from the top eccentric rods. Nigel and Steve assisted Sean and Dave with the removal of some motion. Eventually, later in the afternoon, a start was made on reaming, but time ran out and the next size reamer required wasn’t available. As a result, Ian is going to Hopetown today to see if Arthur Jenkins has the next size required.

Steve removed the left hand rear badly damaged oil pipe, along with the other one which was OK. It has been logged and is stored with its bracket and fixing studs in the workshop upstairs store in Bay 8b. 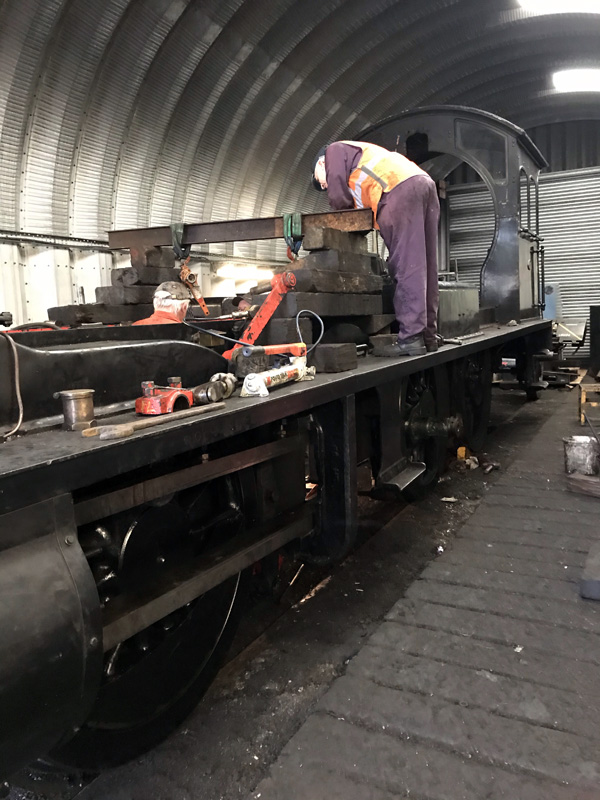 On the NYMR, No 29 is working the Rail Trail shuttle, with the Class 25 and 9F, and Repton operating the Pickering to Whitby services. On Tuesday, a wagon load of large spanners, sockets and other equipment was delivered to the MPD as a gift from BP Hull (see photo), while on Wednesday Black 5 No 44806 had its boiler lifted and put on a well wagon at the MPD. Paul Hutchinson also called in with the company van, bringing a K1 spring back to Grosmont which was off loaded into the spring compound. 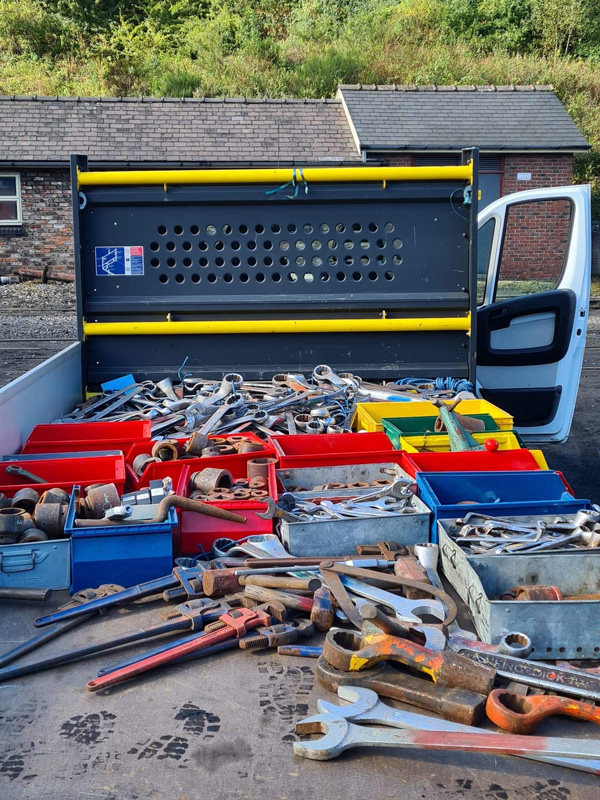