Work at Deviation Shed actually started on Monday, when Bryan Orange attended to tackle the intermittent fault on the downstairs lights which Ian had reported to him on a number of occasions. All junction boxes were checked out with no obvious problems. A new escape emergency light fitting had been purchased for the downstairs part of the workshop and was successfully fixed above the north exit door, wired in, and tested. The one remaining fluorescent fitting positioned above the lathe from the lighting circuit was removed completely. Ian subsequently reported on Tuesday night that the lights did not trip the RCD when he switched them on in the morning, but Bryan will continue to monitor the fault with Ian’s feedback. With Finn Allen, Bryan took an ex-JV prospective NYMR mechanical apprentice through the apprentice scheme content in preparation for next year's scheme.

On Tuesday, Ian Pearson reports that a cool dismal morning, followed by rain from 11 onwards, greeted the rostered Richard De Sadeleer, Nigel Bill, Bill Dobson and Ian himself. First job for Ian and Nigel was to clean out and light the stove. Nigel then put the new pads into the defibrillator case, fitting one and leaving the other as the spare inside the case. The two other new pads have been put upstairs in the filing cabinet top drawer for fitting in the K1 support coach defibrillator when it arrives from Carnforth. Nigel also did some house keeping around the workshop, removing rubbish and emptying bins.

Ian went down to the MPD to arrange a shunt, getting the Q6 frames down from the wheel drops to the back of No 4 Road for jacking up and wheel removal, to avoid blocking the wheel drop for use by the rest of the NYMR locomotive fleet. After getting Barney's agreement, with Chris Cubitt driving the 04 shunter No 2207, and Richard shunting, there were quite a lot of movements to be done before the Q6 could be brought down, including Lucie, No 29 and the tender from 76079 being moved from No 4 Road to No 5 Road. The Q6 was then moved down to the the pit area where the steam reverser cylinders were removed, with Sean driving the JCB and Richard, Dave Brown and Ian slinging the reverser and supervising the movement (see photo). 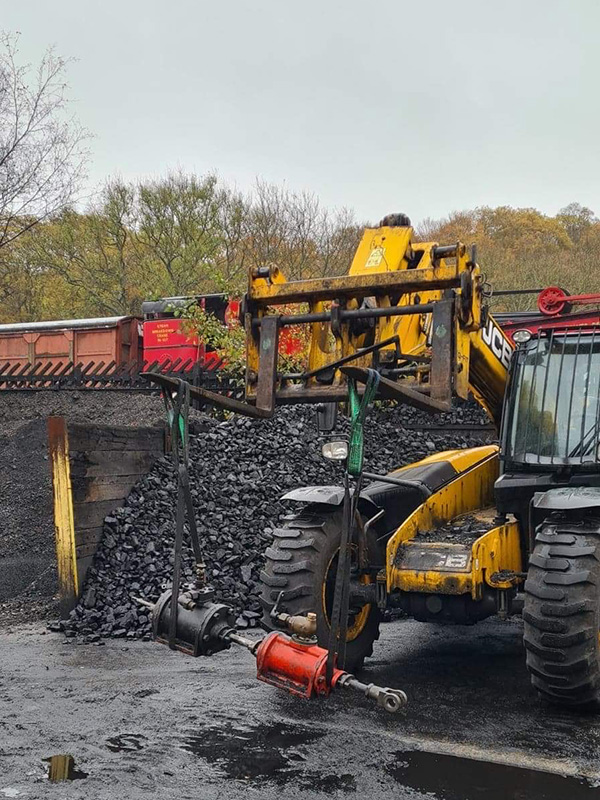 Lunch was had around the stove for the first time in several months.

After lunch the reverser cylinders were put on a trolley in Deviation Shed. Bill and Nigel spent the afternoon stripping down the steam cylinder and removing the piston and ring (see photo). Down at the MPD, on No 4 Road, Ian and Richard cleared lots of oil and dirt accumulation in the 4 foot where work is going to be done for some time to come. The frames were shunted to the back of the Road, next to the J27 on wash out (see photo), and the lifting jacks moved into position but no lifting was done. 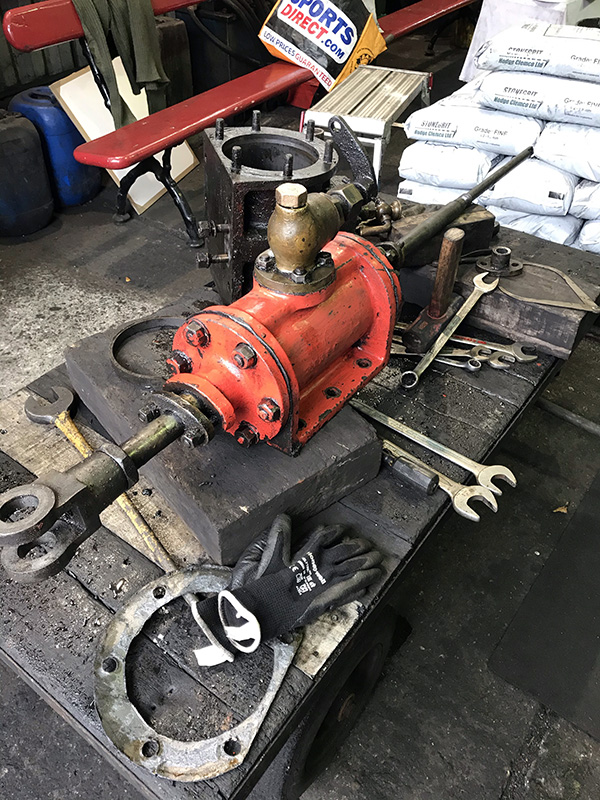 By contrast, Wednesday was a fine, cold, slightly overcast, morning, but with heavy showers during the afternoon for Bill Dobson, Steve Hyman, Ed Bolam and Ian Pearson. After lighting the stove in Deviation Shed, Ed and Ian went down to No 4 Road at the MPD to assist Sean Bowler and Dave Brown who had already started work, removing the bottom part of the cab steps and moving both injector overflow pipes inwards to allow the lifting jacks access under the rear part of the frames. Ian removed the last two split pins from the leading front horn guide bolts while Ed assisted setting up the jacks. The last two remaining brake rods were then removed, followed by all eight sand pipes which Ed cleaned in the parts cleaning bath in the MPD. He also removed all the burnt off rivets from the footsteps and cleaned all the grease off the steps. Sean Bowler will be working full time on the Q6 starting on Monday 2 November, aligning the slide bars and axle boxes, with assistance from the working parties on Tuesday and Wednesday as required.

Back at Deviation Shed, Steve finished dressing the backplate cladding which is now ready for painting (see photo). He also marked up all the sand pipes and labelled and logged them in the inventory. Bill worked all day on the reversing steam cylinder, lapping in the steam valve but then finding too much side to side play (28 thou) where the piston ring fits on the piston. He then took the piston apart and had 20 thou machined off by Barry Nessom down at the machine shop. He then refitted it with only 8 thou clearance. 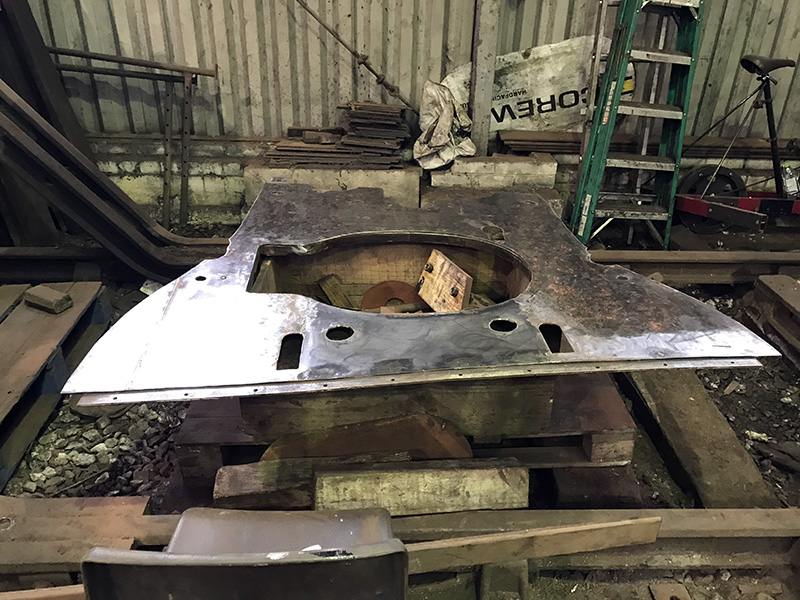 With it being half term, there were were quite a lot of passengers and visitors around the Railway. S15 No 825 and D7268 on the Whitby running, with the 9F on Pickering to Grosmont and Repton on the shuttle to Goathland. No 29 was on steam test on Tuesday, and is working the shuttle today, Friday.