Ian Pearson reports a fine breezy Tuesday morning with the odd shower in the afternoon at Grosmont, with Bill Dobson, Nigel Bill, Nigel Hall and Ian himself at work.

On Monday, Sean Bowler fitted the four oiler pads which were put to soak last week, to the trailing and driving wheel sets. Most of Tuesday saw Bill and Nigel Bill, with Ian assisting occasionally, setting up the temporary fire grate under the firebox ready for the out of frames steam test, using scrap items from the area east of Deviation Shed, old pieces of steel and the Q6 fire bars. Nigel Hall continued cleaning and painting the frame with red gloss, while Ian was making and fitting trimmings for lubricating the axle horn cheeks. He also made a start on remaking other motion trimmings. 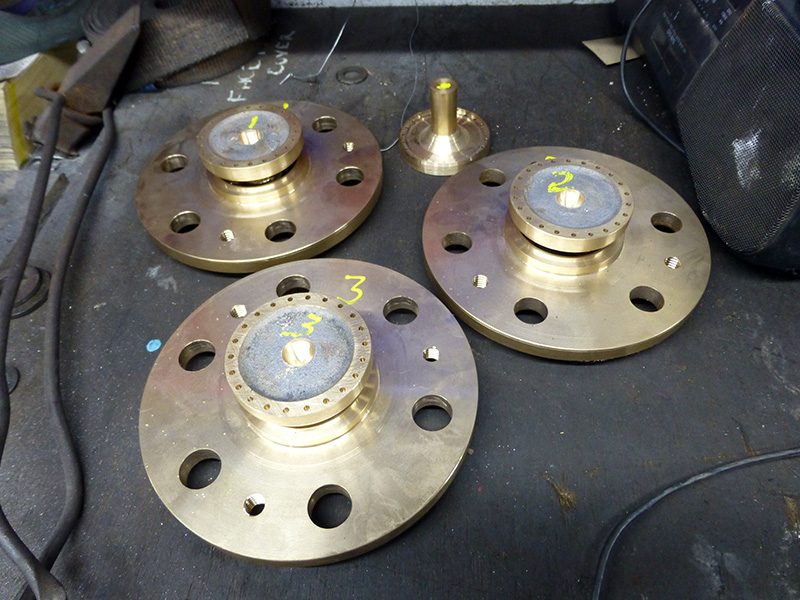 In contrast, Wednesday morning was miserable, damp and dismal, but by the afternoon the sun started to shine and the temperature started to drop. Bill Dobson, Ed Bolam, Steve Hyman, Nigel Hall, Terry Newman and Ian were present.

Bill and Ed spent most of the morning completing the building of the temporary fire grate, with a little assistance from Ian and Steve.

Steve's main job was on the J27, servicing the blower valve. After removing the spindle, the head had a very slight groove around it. This was skimmed in the lathe by Barry Nesom. Steve couldn’t clean the seat of the valve as there wasn't a holding tool suitable to clean up the valve seat. So he reassembled the valve and refitted it. Chris Henwood and Barney have been made aware of what has been done up to date.

Ian continued checking and making trimmings on the righthand lifting links, but there are still quite a few to do. Terry repaired three copper pipes which had various defects. He also assessed the state of the bent vacuum and steam heat pipes and how to straighten them. He will have a go next week. Bill collected the refurbished Q6 safety valves for reassembly, having been inspected and passed by Barney (see photo of new parts machined by Barry Nesom - item 3 is for the J27 safety valve).

After Bill had reassembled them, they were fitted to the boiler. The boiler is getting nearer ready for its steam test! Nigel Hall cleaned and primed the reverse side of the backplate cladding, the foot step and tea tray. Down at the MPD, he cleaned and painted the eccentrics on the driving wheel set with red oxide primer.

After lunch round the stove, and also on the bench near the door with Zak the dog, Ed cleaned all remaining oil and dirt from the Q6 spring hangers and horn stays.There was no water later in the afternoon in Deviation shed as it has been isolated due to cold weather precautions.

However, Barney has given an assurance that Deviation Shed can still have its supply while the coaling stage and washing out hose is isolated but that will have to be sorted next week.