Well here we are at December 1st and Christmas and the New Year are just around the corner. But on a fine cold Tuesday morning at Grosmont, Nigel Hall, Bill Dobson, Nigel Bill and Ian Pearson arrived for the first of the week's Q6 working parties.

Last week Terry was repairing copper pipes. However, one was forgotten - the steam pipe from the steam brake to the brake cylinder which has the oil supply pot attached. It was noted when removed that the pipe was cracked about 20 inches below the oil pot. But on initial inspection in the morning, Ian and Nigel B could not find the crack, so the pipe was returned back upstairs. Sean O'Driscoll's law applies at Grosmont though, and, later in the afternoon, Ian found the crack on the steam brake pipe while looking for another item in the upstairs store. He therefore brought it down to the workshop again ready for Terry to inspect and hopefully repair the next day.

While upstairs in the morning, Nigel B brought the graduable steam brake down to the workshop for cleaning. While he was stripping it down, he found that the bolt that secures the operating handle had sheared at a point where a small taper pin fits through the casting and also the bolt. The inboard portion of the bolt was removed quite easily with a screwdriver, and then Bill took both pieces of bolt to machinist Barry Nesom who soon made a new one - many thanks again to Barry. While reassembling, Bill had to drill through the bolt via the small hole in the casting so as to fit the small taper pin. The attached photos illustrate the problem and the repair. 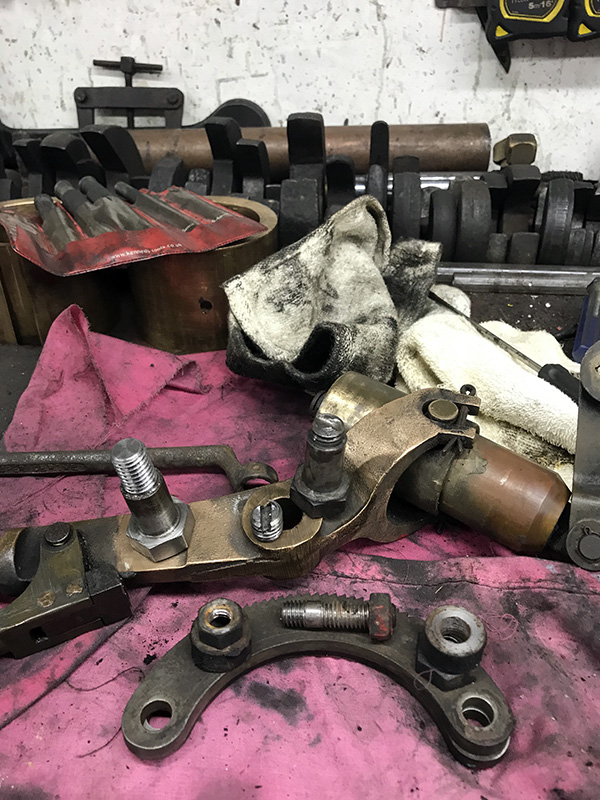 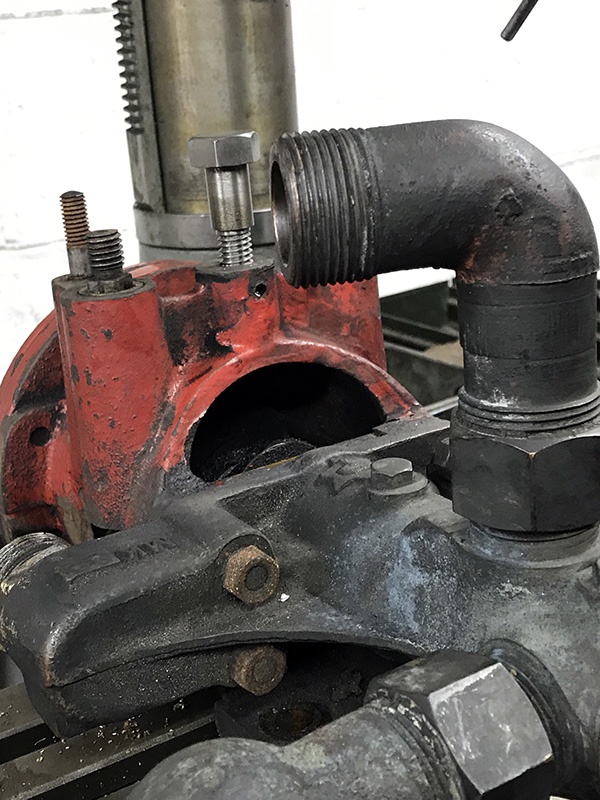 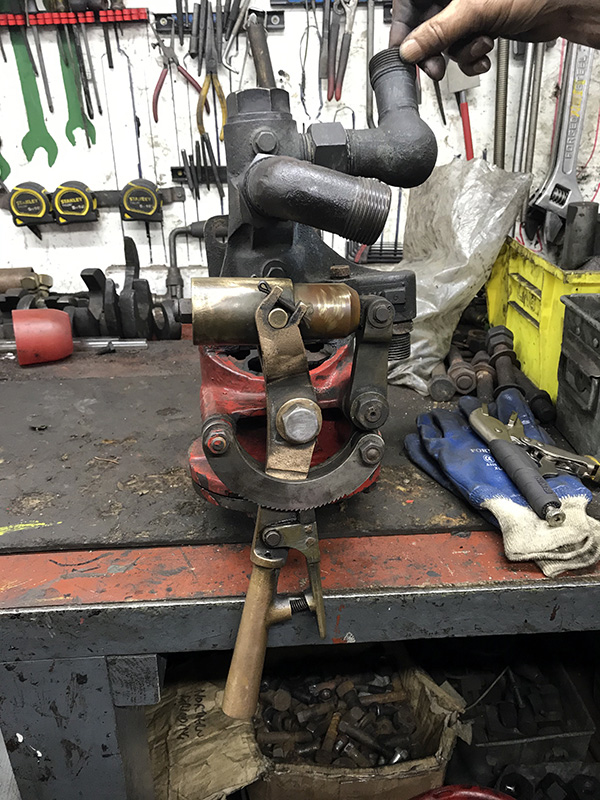 Meanwhile, Nigel Hall continued with painting a coat of red gloss on the eccentrics, then black primer on the reverse side of the backplate, the steps and tea tray. He also fitted the left hand top piece of backplate to the boiler and also the mount for the steam pressure gauge. Bill made up a hose connection plate to fit onto the the right hand side clack box so that it could be secured the following day. Ian completed checking and replacing trimmings around the lifting links, cleaned four boiler top doors, and assisted with some of the pipe work and steam brake work.

Wednesday was a dull dismal morning but with the passage of a cold front, there was bright sunshine (but colder) after lunch. Steve Hyman, Ed Bolam, Ian Pearson and Terry Newman were present. Steve and Ed removed the water hose connector from the clack box that was put on yesterday. It required a new gasket and some spacers. Back at the workshop Steve made a new gasket, found 4 spacers and refitted the connection to the clack box. Ed then assisted Terry splitting the vacuum and steam heat pipes to manage the straightening more easily using the oxy gear. By lunchtime, and with some assistance from Ian, both pipes were straight. Ian and Ed then set up a pair of trestles where Ed spent the rest of the day cleaning the pipes ready for painting by Nigel H. There is still one pipe section to clean though. Terry, after obtaining flux and brazing rods from the MPD, repaired the crack in the steam brake pipe. All boiler doors and plugs were taken down to the boiler shop ready for boxing up the boiler and filling it with water, with the intention of a warming fire being lit on Sunday evening prior to a test steaming before the boiler inspector's visit. Ian and Steve spent spent all afternoon cleaning between the frames mainly the motion plates.

Four engines were in steam on Wednesday on test - the 9F, Repton, No 825, and Lucie, which was also tested by pulling the 140 ton 9F up the head shunt. Today, Thursday, saw a return to operation, with Repton on the Christmas diner, which had been steam heated by Lucie. The diner will also be running on4/8/9/10/11/15 to 18/31 December 2020 and 1 to 3 January 2021, departing Grosmont at 12.30. The Christmas Re-imagined service will also be operating from Pickering to Levisham to see Santa on 5/6/12/13 and 19 to 24 December. All require online prebooking and are subject to any change in Covid restrictions.