Ian Pearson reports that it was a cold and frosty start for the last working party of 2020 at Grosmont yesterday, comprising Bill Dobson, Nigel Hall, Nigel Bill and Ian himself.

Nigel H got the stove going, which was very welcoming on this cold morning, before he started painting. All four eccentric rods have now had a coat of red gloss, and he also did some touching up between the frames. Nigel B completed the monthly and yearly defibrillator checks.

The main job of the day though was to move the Q6 frames from the rear of No 4 road at the MPD back into Deviation Shed. Ian spent most of the morning shunting with Charlie Wood and Chris Cubitt driving the 04 shunter D2207. By lunchtime the Q6 frames were moved into No 7 Road in Deviation Shed, with the B1 in front and 5428 Eric Treacy moved to the wheel drop shed.

Nigel B and Ian then cleaned all the old cardboard from the 4 foot area where the Q6 frames stood, which had been used on the oily floor while everyone worked between the frames, to keep them a little cleaner.

Gordon Wells, who was working down at the MPD, came in and repaired a couple of lights in Deviation Shed above the West side roller shutter door. 2 fluorescent lights were repaired, one with a new tube and the other with a new starter. Two roof lights near the stove area have been out for a while, and Gordon found that they had only tripped out. The circuit breaker was switched back in and they are now all working OK. 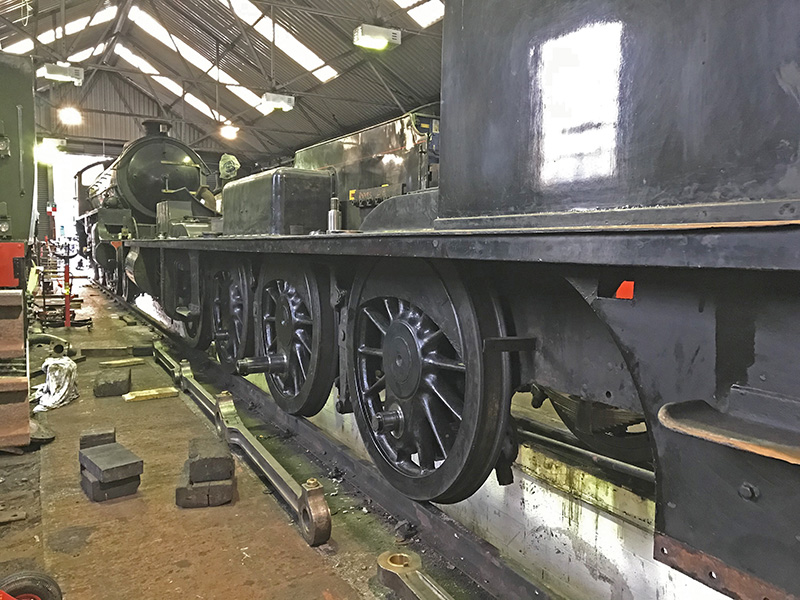 After lunch, a concentrated effort by all four saw the removal of the left hand side rods (see photo) to allow the removal of the leading gradient pin which was found to be tight in the bush. The pin was eventually removed, but the bush, which was proud and also required removal, proved very stubborn, and, after trying various methods of extraction, by late afternoon it was decided to leave it until 5 January 2021 when the next Working Party is scheduled, involving Bill Dobson, Ian Pearson, Nigel Bill, and Nigel Hall, followed by Wednesday 6 January with Bill Dobson, Ian Pearson, Steve Hyman and and Ed Bolam, coronavirus and tier restrictions permitting.

In the meantime, Bill has arranged with the boiler inspector for the out of frames steam test to be held on 11 January at 1pm.

Following the retirement of Bryan Orange as Deviation Shed caretaker after 10 years in charge (he is taking on the Chairmanship of the HRA member services Training and Development Committee in the New Year), I can report that Ian Pearson and Nigel Bill have volunteered to take up the mantle of responsibility as joint caretakers for the building. My thanks to them for so doing, and also to Bryan Orange for all the hard work he has put in over the years in looking after the building and making numerous improvements to its fabric and facilities from which we are all benefitting. He will be continuing with the NELPG JVs, but I wish him good luck with his new role.

At the MPD, Repton was on a steam test and repairs to the J27's valve covers were being carried out. The No 5 Road roller shutter door was also being repaired by N.E.S.S. following a losing argument with a locomotive. Tomorrow sees the last of the Christmas Re-imagined services from Pickering, and the four Moorlander dining trains scheduled for 31 December, and 1 to 3 January are also due to run, again, subject to any further changes to the coronovirus controls which seem to be occurring on almost a daily basis. However, the planned Optimist and Rail Trail services planned between Boxing Day and 3 January have been cancelled, and whether services operate after that date will be subject to review and decision every two weeks. Regardless, the NYMR is hoping to run trains over the February half term (13 - 21 February) with a possible special visitor. So the message is to keep an eye on the NYMR website for up to date details of what is, and is not, running in early 2021.

Finally, it just remains for me to wish you all, and in particular my special correspondent Ian Pearson, all the very best for Christmas and the New Year. 2020 has been the most unimaginable and difficult one I have ever known, so my thanks to all of you, including our NYMR colleagues in the MPD in particular, for your contribution and support, particularly over the last nine months. Although 2021 looks as if it is going to start in similar vein, let's hope that the arrival of the vaccines will herald the beginning of the end of the pandemic and a return, eventually, to a more normal life. As ever though, until that time comes, please do continue to take care and, most importantly, stay safe.