This first report of the New Year covers three days. After Bill and Ian had discussed the work required to prepare for the insurance steam test on Monday 11 January, they decided to work at Grosmont on Monday this week, as well as Tuesday and Wednesday.

So, on a cold Monday morning, with heavy wintery showers, Bill and Ian met Sean Bowler at Deviation Shed to discuss what needed to be done with the tight gradient pin and bush on the leading section left hand side rod. After removing the pin which Sean ground slightly, he then dressed the inside of the bush with a small abrasive wheel. Bill and Ian started work setting up jacks under the foundation ring in preparation for lifting, to allow removal of the wooden beam and its replacement with the steel beam Bill acquired recently. But the steel beam had first to be reinforced by welding steel plate into the web of the beam, so wouldn't be ready for another 24 hours. By lunchtime Sean had finished dressing the bush. The gradient pin was tried inside the bush and was a good fit. Afterwards the front section of side rod was assembled, and the side rods fitted back onto the wheels.

Tuesday was another cold wintry day with Bill Dobson, Nigel Bill and Ian Pearson rostered, along with Sean Bowler and Dave Brown. After discussion with Sean and Dave, the main job for Sean was to prepare for lining up the slide bars, but this would mean the Q6 frames could not be moved. So it was decided that Sean would drive the tele handler and take the pallet of bagged shot blast material out of Deviation Shed to covered accommodation in a metal container near the oil store. After this, the Q6 was shunted outside and the steam reverser was taken by the tele handler to the south end of Deviation Shed and fitted back onto the Q6 frames which were then shunted back into Deviation Shed. Sean and Dave were then able to start setting up their equipment for lining up the slide bars. Unfortunately, Sean O'Driscoll's law continues to apply in 2021, and some of the fittings were found to be not compatible with the Q6: Sean had to make some new fittings. While that was being done, Dave fitted some split pins on the horn guide bolts that never got done when the frames were down at the MPD. Bill and Ian started securing the steam reverser which they planned to complete the next day. After lunch, Bill, Ian and Nigel set about removing the wooden beam from under the firebox foundation ring (see photo) using strops and a pull lift. Eventually it was replaced with a steel beam (see photo). 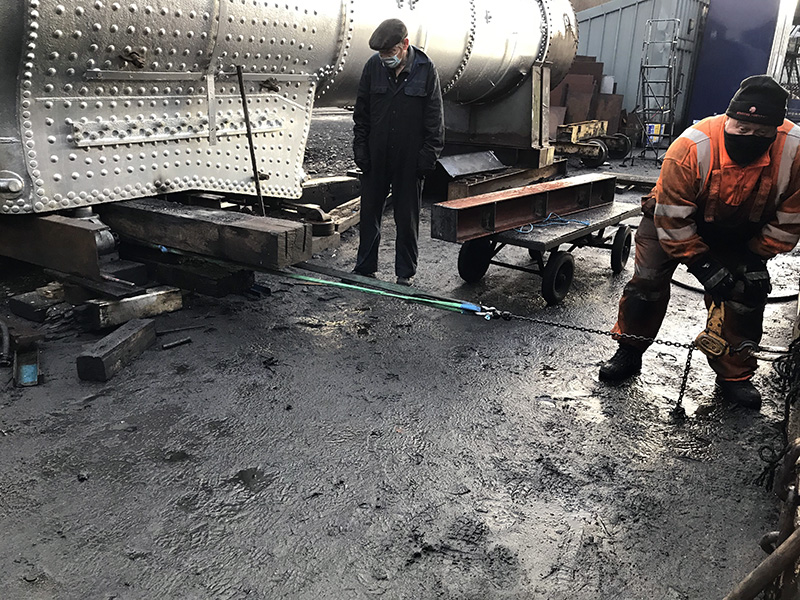 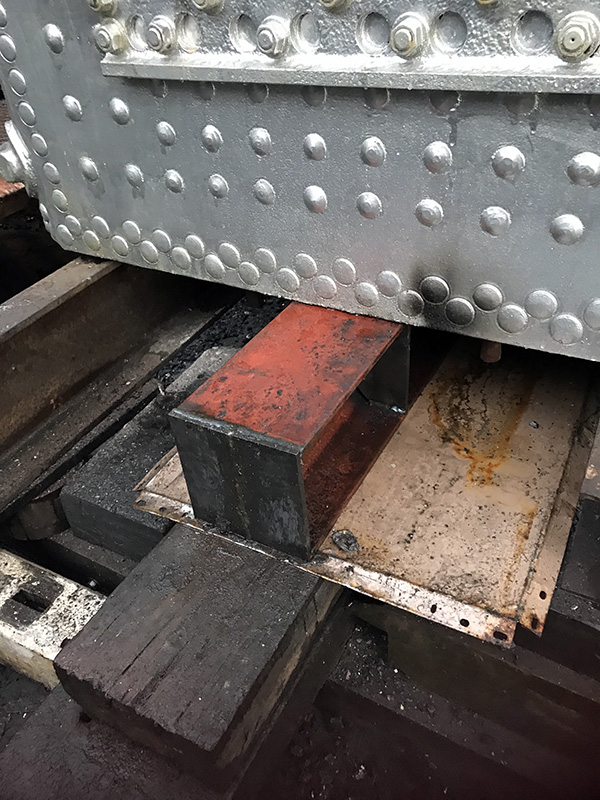 It was no warmer on Wednesday for Bill Dobson, Ian Pearson and Ed Bolam, again, along with Sean Bowler and Dave Brown. Sean and Dave spent the day working on the left hand slide bar alignment (see photo). Bill also discussed the alignment with Sean and established that the cross heads will also have to be re-metalled. Bill has measured the boiler barrel and firebox area for insulation which will be ordered shortly, and also for new flexible axle box oil pipes, of which 16 will be required, 18” long. Ian and Ed completed fitting the steam reverser securing bolts and split pinning. In the morning, Chris Kelly fitted the bottom left hand mud hole door. This had been removed to let the boiler water out on the Tuesday before Christmas. The boiler was then filled half full and after lunch Ed and Ian set, and lit, a warming fire in the Q6. Ed also fitted both cab bottom steps which were removed when the frames were on No 4 Road in the MPD to allow the jacks to be fitted when the frames were lifted. 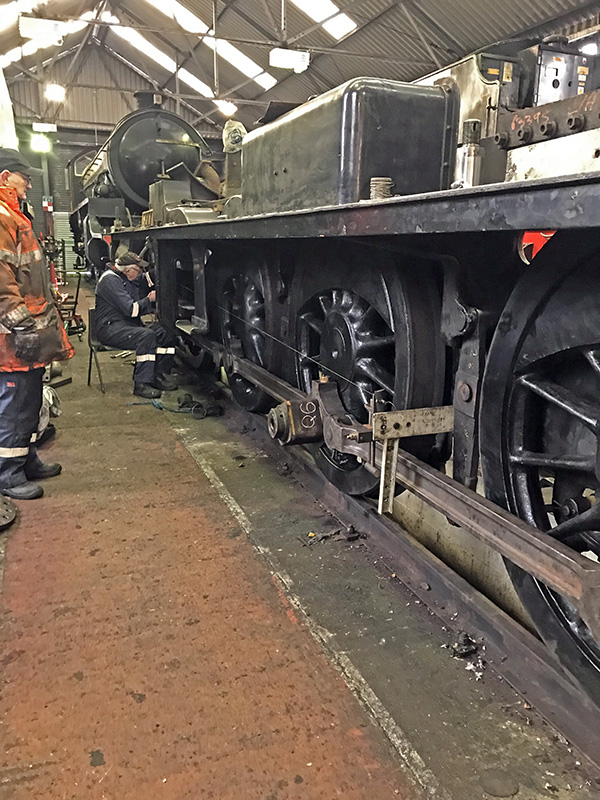