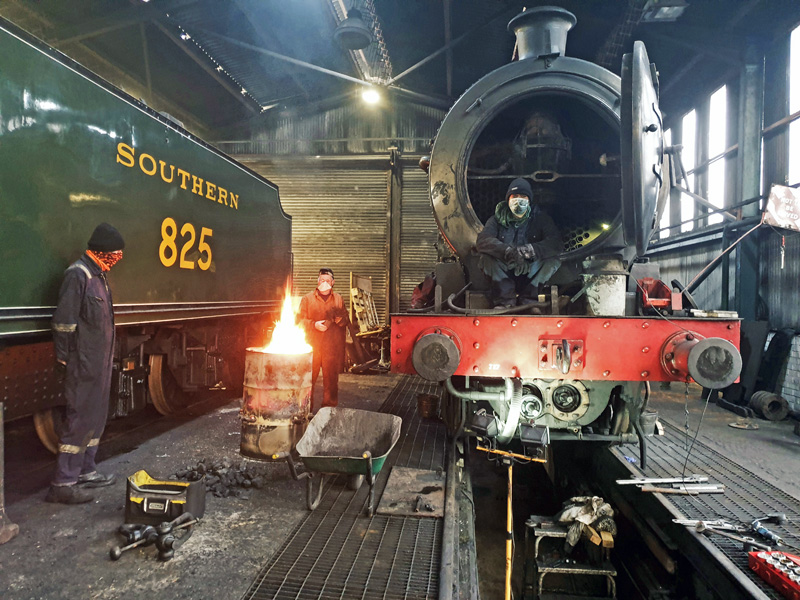 Chris Henwood reports that on Friday 22 January, Robson Hewitson was in attendance, and, during the day, the engine and tender were split. The tender now resides temporarily on No 7 Road in Deviation Shed, and the engine has returned to the back of the running shed on No 5 Road while the motion strip down continues. After Robson had finished the shunt, he managed to remove both crosshead cotters in preparation for them to be split. He also began cleaning the remaining motion to make working within the confines of the frames easier and ultimately more pleasant!

On a very cold Saturday 23rd, Ian Pearson, Neal Woods, Richard De Sadeleer, Paul Taylor and Chris were in attendance and the barrel was lit to provide some warmth (see photo). They found neither our crosshead splitting gear, nor that borrowed from the MPD, was suitable due to the gudgeon pin portion of the gear being oversized. The correct pin is apparently at Hopetown so Neal will bring it down next week. Neal offered to inspect both loco and tender and offered advice on his findings. He then stripped down and lapped in both safety valves. The rear safety valve will be fitted with its new base and valve after the cold exam has been completed.

Paul Taylor cleaned the smokebox and has now completely exposed the top of the cylinder block. Although this will need some final prep, it is essentially ready for paint and concrete. Ian Pearson cleaned all of the washout plugs and most of the mud hole doors. The plugs are now stored in Deviation Shed, and the finished mud hole doors labelled and on the running plate. After consultation with Neal, Richard and Chris started work around the block. Richard began stripping the front end of pipe work fittings, clips and the steam heat valve and connections, as well as the shackle, as part of the preparation for the buffer beam to be removed. Chris split the valve rods from their crossheads and levered them forward, after which Richard manned the large copper hammer and persuaded the valves through the two liners, as Chris manipulated the heads to ensure the rings started in each liner. Both were successfully extracted and are laid with the rest of the motion. A start was made to examine, fettle and assemble the big end brasses ready for measuring next week.

There will be a working party next Saturday, and if you are willing to attend please contact Chris direct. Dependent on availability, there could be another working party mid week: again, please contact Chris if you are able to participate. Remember though that under the Covid controls, numbers are limited to those required for the essential work that has to be done, so please do not turn up on spec as you will be (politely, as ever) asked to leave.