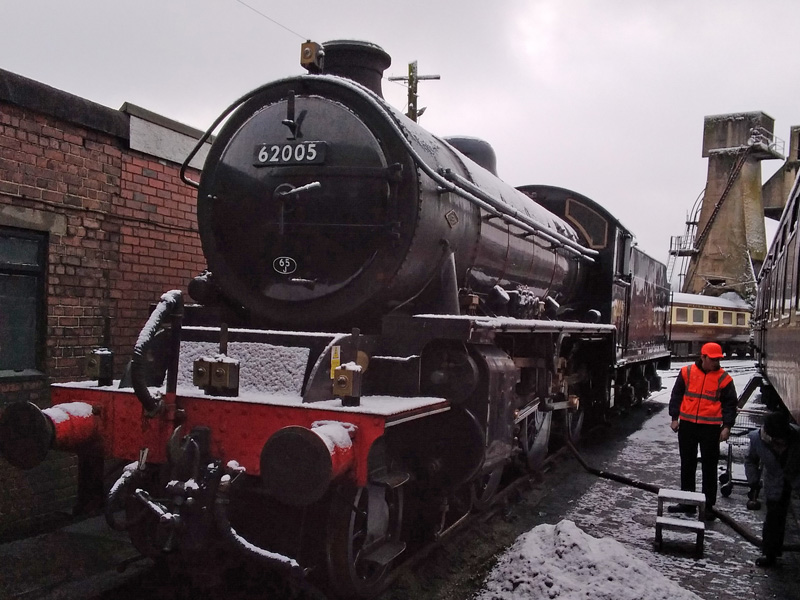 Since the last update the loco and coach have been successfully UAT'd (last Tuesday) and we have had one further working party (last Saturday) to refit the cladding sheet removed to facilitate the throat plate repair, tap a washout plug hole that, while steam tight, wept when cold and attended to a few other minor matters.

We were greeted with a covering of snow when we arrived on Saturday, as shown on the attached photo. This was taken as we started to drain the boiler. Tom Dibbs and Angie (just visible next to the coach) are in the process of sorting the drain hose out.

I am going back over tomorrow to refill the boiler and finish off a few minor jobs and I have requested a move, for the engine and coach, from Carnforth to Grosmont. I hope that this will be confirmed tomorrow, following which I will contact all those who offered their services to support the move.

We will start this winter's maintenance as soon as the engine gets back to Grosmont with a view to having it ready to enter NYMR service, with annual mainline certification complete, for the end of March. It is then hoped to do a couple of weeks running before we head North, probably on the 19th or 20th April. Our first Jacobite is on 25th April.