This subject is a bit misleading as the working party on 2 February was cancelled because of the bad weather that day. However, Bill Dobson, Ed Bolam, Gordon Wells and Ian Pearson gathered at Grosmont on a wet, cold and dismal Wednesday. The water level in the river was apparently at 4ft.

Sean Bowler informed Bill and Ian, while down at the MPD, that the crossheads were ready for fitting. Ed and Ian then took each set of crossheads from the machine shop to Deviation Shed and made a start on fitting the left side first, using our new lifting table. This makes the lifting much easier for old codgers - just jack the table up with no wooden packing required. Unfortunately though, the crosshead proved to be a bit on the tight side. As Sean had come up to Deviation Shed to see how the fitting was progressing, he and and Bill took the crosshead down and had to do some scraping of the white metal on the top slipper before refitting. This took several hours to get a good fit. 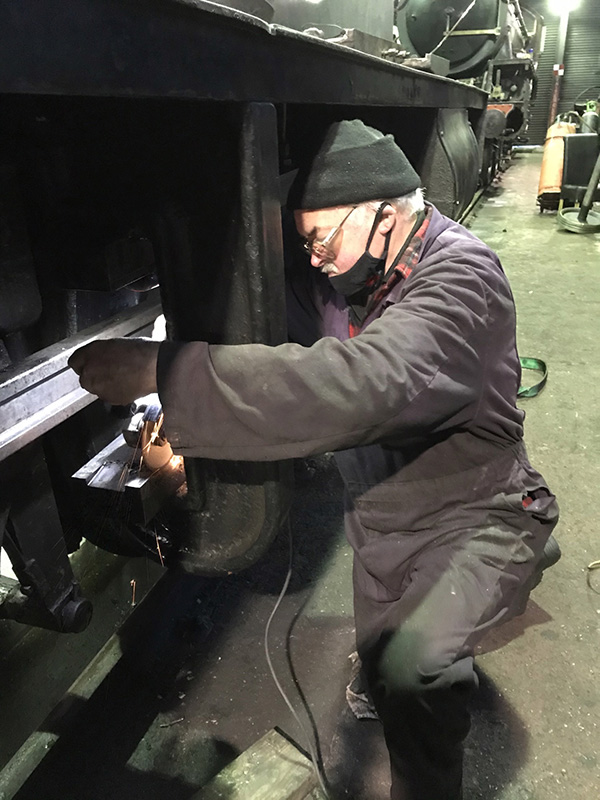 Meanwhile, Ian and Ed fitted the two remaining sand pipes to the right hand side. Bill brought the spare mechanical lubricator down from the workshop upstairs store and put it onto the right hand side running board where it is intended to be fitted (see photo). Gordon came in later to check the lubricator and mark out where some of the pipe work will go. It was planned to start fitting the connecting rods, so Ed cleaned both sets of bearings and fittings, but that was as far as it got on the day. Later on in the afternoon, Sean completed fitting the left side crosshead and made a start on the right hand side. This was also tight and more scraping of white metal and some dressing of the slide bars was required (see photo). Finishing was left for Thursday. 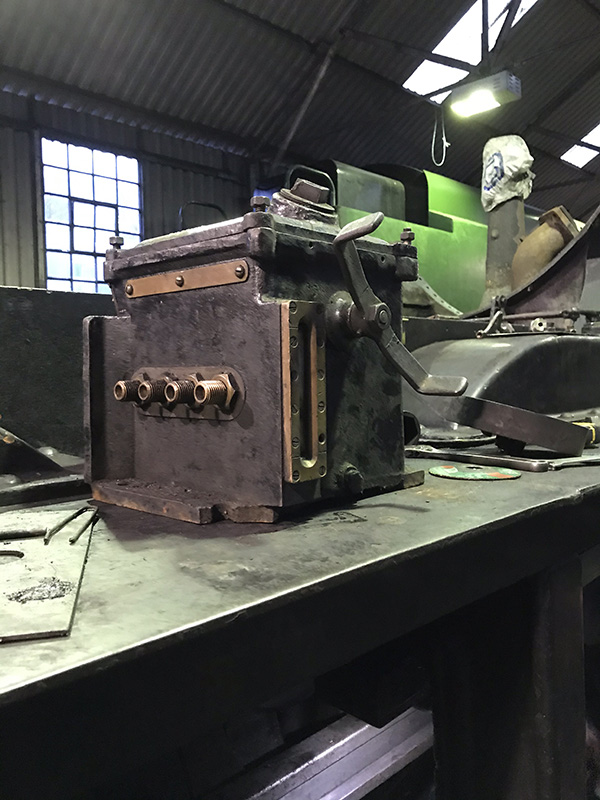 Tender and locomotive were finally moved to the rear of No 7 Road to allow enough room to get the K1 in front of the Q6 and still provide bridge access between each locomotive. The K1 and support coach were parked near the water column awaiting disposal to allow cooling down before shunting into Deviation Shed.

Today, Ian was at Grosmont again, assisting Sean Bowler with the right hand side crosshead. The crosshead is now fitted and moved along the slide bars quite easily, after dressing the slide bars and also a small amount of white metal from the top slipper. The K1 was disposed on the pit by Paul and Angie and then shunted into Deviation Shed (see photo) after the B1 was moved out, with the support coach outside on No 7 Road.