A fine, mild, day for a change at Grosmont on Tuesday for Bill Dobson, Nigel Bill, Jon Bradley and Ian Pearson, although the first job of the day remained lighting the stove.

All the lifting equipment was inspected, including 5 strops and one shackle from the K1 support coach. The only item to fail was the pull lift from Deviation Shed. This had numerous defects so has been scrapped. Nigel B is going to acquire a new one. The current colour code is now blue.

Bill and Gordon Wells spent all morning discussing and planning what type of fittings and components are required for the new Q6 lubrication system. Last Thursday, Ian went to Middlesbrough and picked up six 18 flexible pipes from Northern Hydraulics which will be used to feed the leading, intermediate, and driving axle boxes. Two 36” flexible pipes will be ordered for the trailing axle boxes shortly. It is intended to fit atomisers to the valves. Bill has acquired two old sets of atomisers but they will need testing for leaks. These were cleaned on the outside by Nigel B using the shot blaster at the MPD. It was also found that some of the threads which will connect the oil feeds have different threads. This will make fitting a bit more complicated and an adapter will have to be made. One of the plug fittings was missing - it was lost in the workshop some three years ago and thought to be somewhere underneath the workbench .

Jon primed the five sections of cab back plate fittings, and during the afternoon the left hand little end pin was fitted and secured. 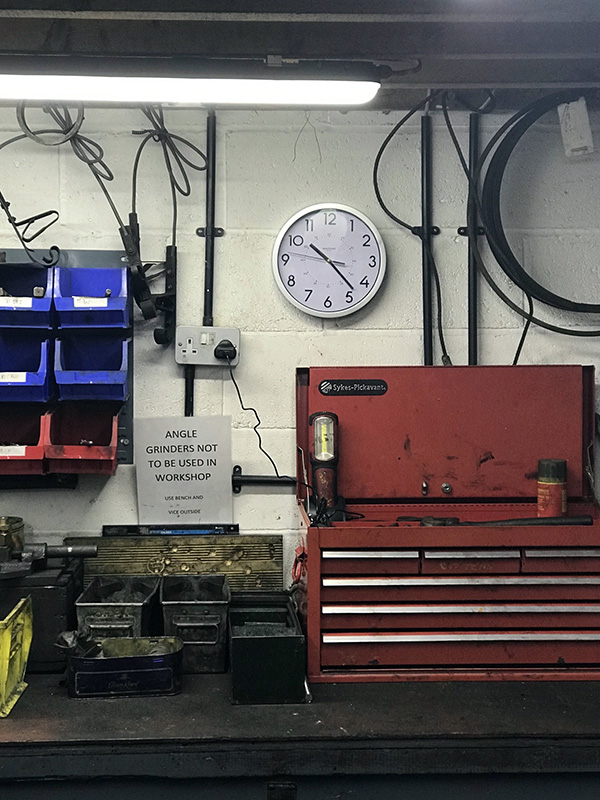 Wednesday morning started a bit dull and overcast, albeit mild, but became much brighter later. Bill wasn't feeling very well so only Ian Pearson and Ed Bolam were present. The workshop clock had stopped working early last year (not a flat battery) and today Ed brought a new one and fitted it to the south end wall (see photo). Ian told Ed about the missing plug fitting from one of the atomisers which had been lost underneath the workbench. Ed bravely cleaned all the rubbish from under the work benches and eventually found the missing plug. He then continued to clean the stubborn dirt that was left on the atomisers'

body and threads. Ian spent most of the day putting a slight chamfer on the piston heads.

All the fire extinguishers had their yearly check - usually carried out in August but the company changed its routine check to February. Bill did call in with Zak the dog later in the afternoon as he was feeling better.