With the arrival of Spring, with Daffodils and Primroses appearing by the roadside, and being blessed with some fine sunny weather, Ian has reported on four days of Q6 activity at Grosmont this week.

With the Q6 boiler insurance test booked with Bureau Veritas inspector Glynn Coxall for 2pm on Monday 22nd March, Bill and Ian arranged with MPD staff to put a warming fire in the Q6 on the Sunday afternoon. They both arrived about 2pm and set about cleaning the grate, then setting a warming fire. Bill also carried out some work cutting a slot on the running plate to allow the drive from the new lubricator to be connected to the drive from the cylinder lubricator. Ian fitted the pressure gauge and gauge glass protectors, then lit the warming fire.

Another fine sunny day but on a very cold morning, Ian went in around 6am to get the fire box ash cleaned and lit up again. While waiting for the steam to rise he cleaned the bottom smokebox door hinge strap as it was very rusty. Bill and Gordon came in later in the morning to continue working on the lubricator and fitting new pipe work from the brass oil boxes which will supply oil to the horn guides (see photo). Although the boiler was lit early, it seemed reluctant to make steam, so a polythene sheet was wrapped around the bottom side of the smokebox with sticky tape over the smaller holes around the smokebox. This helped tremendously to draw the fire with the blower in action. By 2pm there was 100 lbs of steam on the gauge, but, fortunately, it was still rising as Glynn had just arrived. So Bill made him a cuppa at Deviation Shed and sorted out the paper work. Then, by 2.20 pm it was not far from blowing off when Glynn came down from Deviation Shed with Bill and carried out his inspection. The safety valves are blowing off slightly light, but everything was satisfactory so the out of the frames test was satisfactorily completed at long last, with a ticket to 2028 subject to annual inspections (see photo). 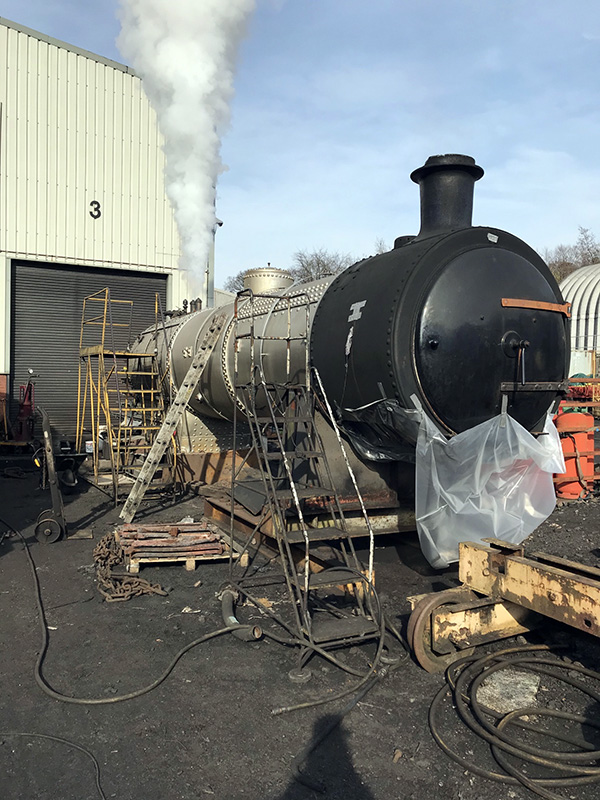 A fine, slightly overcast, day with bright periods for Bill Dobson, Ian Pearson, Nigel Bill, Gordon Wells and Trevor Wilford. Bill continued with the mechanised fittings on the new lubricator while Gordon continued fitting and completed the rest of the copper pipe work from the brass oil boxes to the horn guides. Nigel cleaned the rust from the top smokebox door hinge strap and greased up both of them, and, after Ian had removed the pressure gauge and gauge glass protectors, Nigel turned his attention to cleaning these. The pressure gauge was then returned to the MPD stores for safe keeping. Trevor put a bend into the steel driving shaft for the new lubricator on Bill's instructions. He then spent the rest of the day working on the ash pan. Ian cleaned all the old ash from the firebox and then started moving it to the ash compound before cleared some water and air hoses which had been used during the steam test. 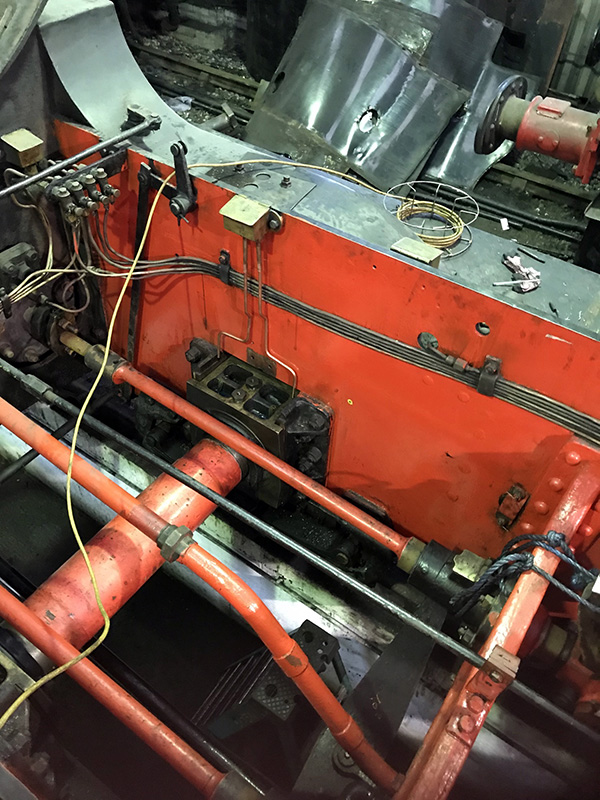 Another bright day with Ed Bolam, Bill Dobson, Ian Pearson, Nigel Bill and Terry Newman. Terry came in to solder the new copper pipes that Gordon fitted over the last two days: these are now fully connected to the brass boxes. Nigel Hall called in briefly to see what paint was required for the Q6 cladding repaint.

Ed assisted Ian in removing the balance of ash from underneath the fire grate. Then Ed had a crash course on the big radial drill with Chris Kelley setting it up. Ed then drilled out a 1”hole in seven 4 inch plates which will fit around the pegs on the bottom of the ash pan and then be pinned with a cotter when the ash pan is attached back onto the boiler. After noticing that the rocking grate linkage was bolted with double nuts instead of being pinned (which uses a washer and split pin), and discussion with Nick Simpson, Nigel was asked to give Nick a drawing of what was required and the MPD will have four new pins made. This will rectify a mistake when the MPD altered the grate from fixed fire bars to a rocking grate. Nigel also freed both damper doors with a little gentle persuasion and some oil. Later he made two long pins for the gauge glass protectors, and Chris Cubitt tapped a thread on the bottom end of each one. Nigel is going to acquire some small nuts to fit these and he will then be able to fit new springs. Then the back plate will stay closed. Nigel also removed, cleaned and ground in two steam oil supply test cocks and refitted them back to the supply pipes.

Ian set about removing a piece of backplate which was needed to support the pressure gauge during the steam test. A simple sounding task, but it took all afternoon with some help from Ed. First the gauge glasses had to be removed, then the blower delivery pipe which has air ministry joints, and eventually the section of backplate could be removed. On inspecting the blower valve bottom studs these looked to be wasting away with not much thread left, so they will have to be removed and replaced. The next job was a very dirty one in the smokebox, removing the blower pipe. This was taken with the cab blower pipe back to Deviation workshop for annealing. Bill borrowed the mag drill from the MPD, set it up on the running plate, and drilled the four holes required and then secured the new lubricator in place.

Bill has ordered the boiler insulation but not as much as first calculated due to the fact that about 10 rolls were salvaged from the MPD rubbish skip. Some had got slightly damp on the corners but on inspection they were found to still be suitable for use. The Geoff Drury training still pays dividends.