Ian reports that, on Sunday (4 April), Bill and he went to Deviation Shed to move all the boiler cladding from the centre to the front area of of No 6 Road. They also moved various other items that were stored in the four foot of No 6 Road to the side footpath. That then allowed No. 5 locomotive to be moved back to buffer up to 80135 using pinch bars, helped by Richard De Sadeleer who was working with Paul Hutchinson that day. After a break for lunch, a bench was then set up inside No 6 Road, onto which some painted sheets were moved, before setting up the outside benches with fresh cladding sheets for dressing and priming.

For the regular working party on Tuesday, it was fine, cold, and sunny with hail and snow showers during the afternoon - quite a contrast with last week! Attending for the day were Bill Dobson, Nigel Hall, Jon Bradley, Nigel Bill, Trevor Wilford, Gordon Wells and Ian himself. After a quick cuppa, Trevor was again working mainly on the ash pan, where extra welding was required on the rear inside of the ash pan, and also annealing two sections of copper pipe. Nigel Hall and Jon Bradley were equally working all day dressing and priming the cladding sheets. Nigel Bill spent most of the day drilling out larger bracket holes to suit our bolts. These brackets were newly delivered for clamping the copper pipe work. Barry Nesom brought in the new lubrication blocks which he had made down at the MPD machine shop. These are to be attached to the top of each axle box and then connected to the oil supply. Gordon worked all day on the copper pipe work and we now have what looks like the new axle box lubricator system (see photo).

Ian and Bill removed all the grate from the firebox. The front bars have been stacked on the racks at the side of No 4 Road. The rear set are being kept close by as they will be refitted when the boiler is returned to the frames. Later Bill was working on the axle box fittings.

After lunch, Ian spent all afternoon trying to remove 3 remnants of cotter pins from the foundation ring pegs which got overlooked when the boiler was lifted last year. Unfortunately none would move, even after heating and hammering with a chisel. It was decided it would have to be a drill out job with the cotters being made of stainless steel.

Wednesday was another very cold, fine, day but without the hail and snow showers. With Bill Dobson, Ed Bolam, Nigel Hall, and Ian, but also Mike Bloomfield, available from the K1 team. Nigel Hall and Mike spent the day dressing and priming the cladding sheets, while Ed Bolam spent half of the day drilling and tapping small holes between the frames for the oil pipe brackets. Meanwhile, Bill was busy drilling and tapping the 8 axle box top plugs which were only threaded halfway down. 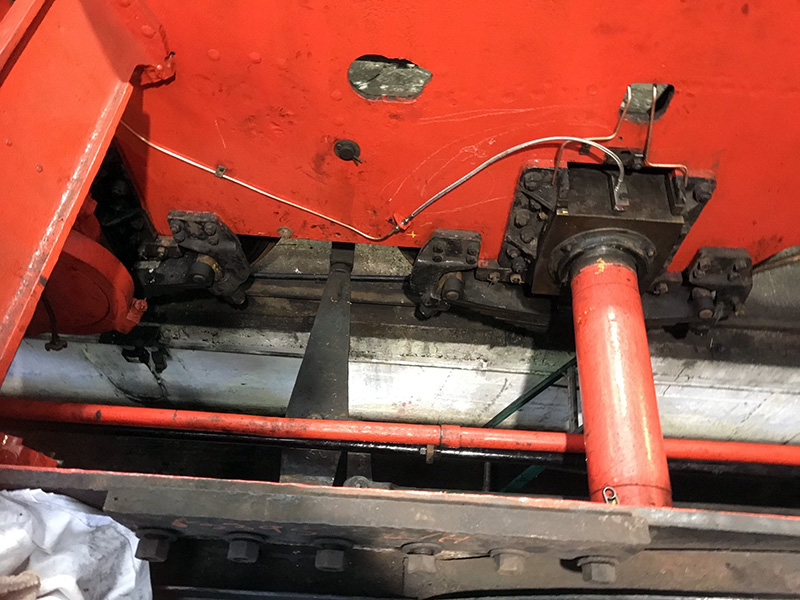 Ian had acquired 2 new cobalt drill bits from Screwfix on Tuesday evening on his way home to drill through the stainless steel cotter remnants on the foundation ring pegs. Paul Hutchinson made up a long bar with a chisel end, although he did comment that Ian should have been using a heavier hammer, but, as Ian pointed out, a bit awkward when you are laying on the ground to get a swipe at it.

After lunch Ed worked with Ian down at the firebox, and, after a lot of drilling holes into the remnants, they managed to knock the offending pieces out ( see photo with offending pieces removed). The reel of MIG welding wire was finished on Wednesday and Trevor is going to obtain another one. 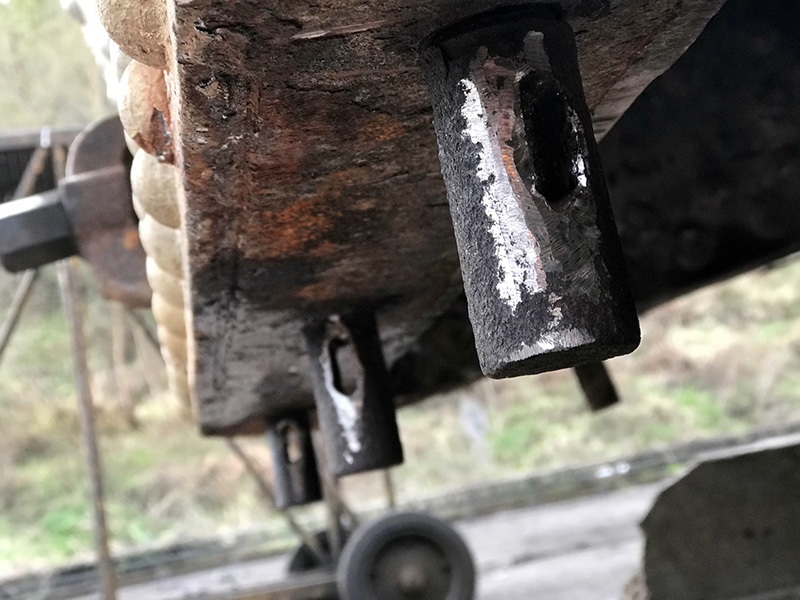