Another multi day report from Ian Pearson, plus some admin requests from MPD management at the end.

On Saturday 10 April, Bill Dobson, Ian Pearson and Nigel Hall were present to move three locomotives so as to give some space to refurbish the Q6 cab. No 7 Road has a stop board on it and is in very poor condition, so shunting on it has been stopped. Bill had borrowed a Tirfor winch from the MPD instead of having to use pinch bars. First job was to remove various items from the north end of No 8 Road. This included a velocipede which is now in the Armstrong Oilers building. Then the Bullied Pacific Hartland's tender (with Hartland attached) was winched back to create space at the front of No 8 Road to fit the Q6 cab (see photo). The B1 was then moved outside onto No 7 Road with both a struggle and help from others working on the K1 and J27. The Q6 was then moved to the front of No 7 Road to facilitate the cab removal. Nigel Hall continued to undercoat various cladding items during the afternoon. 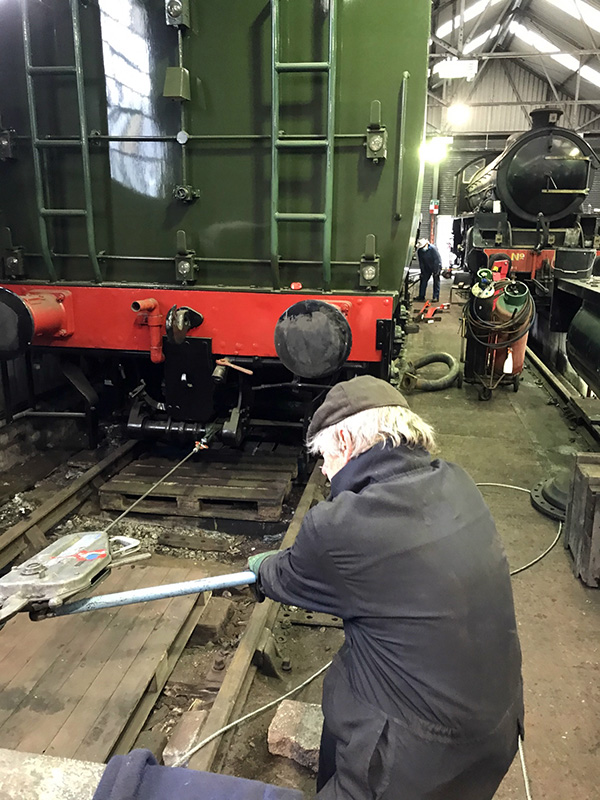 Bill went in on the Monday to see if a shunt could take place to continue moving the B1 and Q6 to allow the Q6 cab to be removed. This went ahead and the cab was removed with the JCB front loader and set down on No 8 Road.

Tuesday was a fine, frosty, sunny, morning which warmed up later with Bill Dobson, Nigel Hall, Jon Bradley, Trevor Wilford and Ian Pearson present. The main job was to move the cab into Deviation Shed on No 8 Road, then turn it so the cab roof was vertical and easier to clean, prep and varnish. Trevor spent most of the day making up the new stainless steel cotters which will secure the ash pan to the firebox. He then connected the new spool of mig wire to the welding set. Meanwhile, moving the cab took the remaining four nearly all day, using both pull lifts and a system of rollers using old boiler tubes. Nigel did get some cladding painting done later on in the afternoon however.

Wednesday was another sunny, frosty morning, again warming up by late morning. Present were Bill Dobson, Nigel Hall, Ed Bolam and Ian Pearson, along with Terry Newman and myself. Ian, Ed and Nigel had an NYMR coronavirus lateral test: all were negative. Terry came in to do some special soldering of the new copper pipe work for the axle box lubrication system, and also soldered some pipe work to fittings to a pressure gauge to check that the lubricators are delivering oil. Bill was assisting and advising Terry with the copper pipe soldering. With the new pressure gauge fitted to the valve and cylinder lubricator, a test was carried out successfully. A start was made on the axle box lubricator but more tests are required.

I was on my first visit to Deviation Shed for a year, and had various business items to discuss with shed management and others. As I had also had a birthday in the 12 months since my last visit, I had brought in a chocolate cake which was shared at lunch time. I also made afternoon tea and gave Nigel Hall a hand in the morning to move some of the cladding sheets to make space for Nigel and Ed, with a little assistance from Ian, to later lift into position the cladding sheets that Ed had been dressing during the day, ready for Nigel to paint the insides. Nigel had also started on cleaning and prepping the inside cab roof for revarnishing (see photo). Ian took out six bottom doors from the boiler: these are in a box in the workshop, then ran a 1/2 “ die nut down four studs on the cab blower valve. 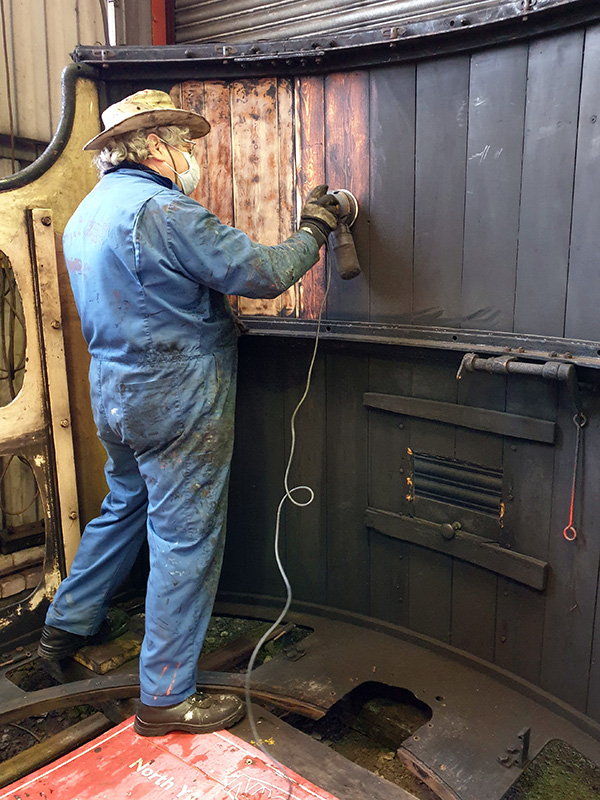