Nigel Hall and Jonathan Bradley were at Grosmont last Saturday, taking advantage of the continuing dry and sunny weather, and lack of other activity, for painting.

Jonathan got on with rubbing down the cab roof. He had a detail sander so corners and awkward bits now covered. He started on the sides.

The backhead cladding now had a gloss coat thanks to Nigel's efforts. He continued with the cladding sheets. 2 of the barrel sheets are finished, 2 more he hoped to finish on Tuesday (drying overnight), and 2 more on Wednesday

Gordon continued fitting the complex copper pipe work to feed the axle boxes with lubricating oil. Bill and Gordon also did some tests on the new steel oil feed blocks to achieve the correct flow of oil. Bill is going to order some new springs for the steel blocks which are not as strong as the ones that are fitted.

Nigel Hall brought two rail trollies from Hopetown to make moving the cladding sheets to the boiler easier, and, with assistance from Jon, carried on dressing and painting the cladding.

Jon also started work on fitting new gate posts to the north side of the Deviation Shed access footpath. It is intended for use by NELPG volunteers accessing the shed from the MPD, instead of using the ramp as is done at the moment.

Trevor spent some time under the Q6 frames removing the ends of the diaphragm bolts which were thought to be too long and may get in the way when the boiler is refitted. Later, Ian and Trevor set up packing under the boiler at the front end, jacked it up a few inches, and then packed up between the front trestle and boiler to allow the front cladding sheet to be fitted. Ian and Bill then made a start fitting insulation and backplate cladding (see photo). Nigel Bill cleaned quite a lot of scale from the foundation ring then gave it a good wash round.

Taking advantage of the good weather, lunch was had alfresco using the picnic tables outside Deviation Shed. After finishing for the day, Bill, Nigel Hall, Jon and Ian enjoyed a pint of beer at the Horseshoe at Egton Bridge, sat around the picnic tables on the green outside the pub, suitably socially distanced.

Wednesday was another fine day, albeit slightly cooler, with Jon Bradley, Bill Dobson, Nigel Hall, Steve Hyman and, a little later, Ian Pearson after his first haircut since early December.

Jon was working on the new gate but had to leave early about 1030 for a COVID test off site which was later reported negative. NYMR COVID lateral testing was separately carried out at Grosmont on Bill, Steve, Nigel Hall and Ian, all proving negative.

Steve’s first job was to paint the new gate which Jon had made earlier. Nigel Hall continued to dress and paint more sections of cladding, with Steve assisting where required. The trolley was loaded up with with sections of cladding and pushed down to the boiler with a couple of derailments. After the second one, Barney moved both trolleys clear of the track with the fork lift truck. 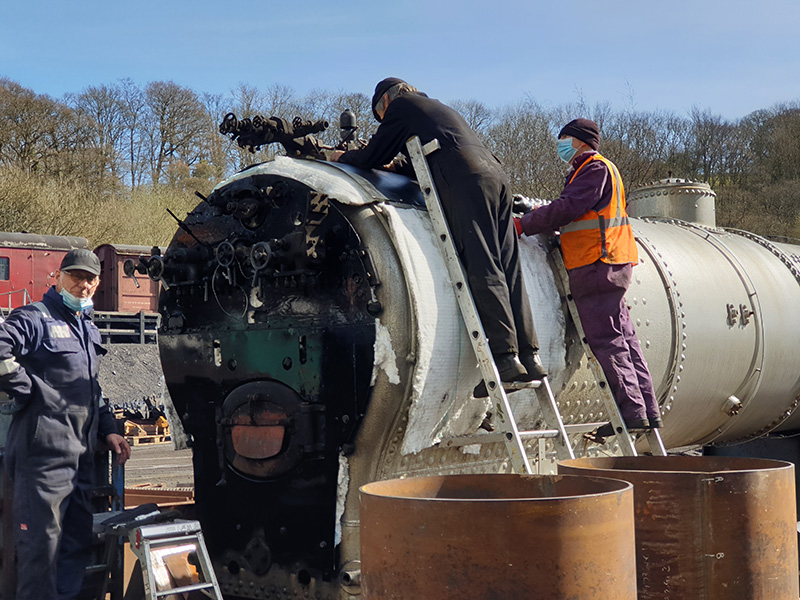 Lunch again was had outside alfresco on the picnic tables. Bill and Ian, joined by Steve after lunch, were mostly employed fitting more of the backplate cladding and insulation to the boiler (see photo). It looks though as if the bottom backplate cladding sheet will have to be removed though, as the holes for the boiler plugs aren’t big enough to allow a socket to enter for removal. These holes will have to be ground out or cut to allow access for plug removal. 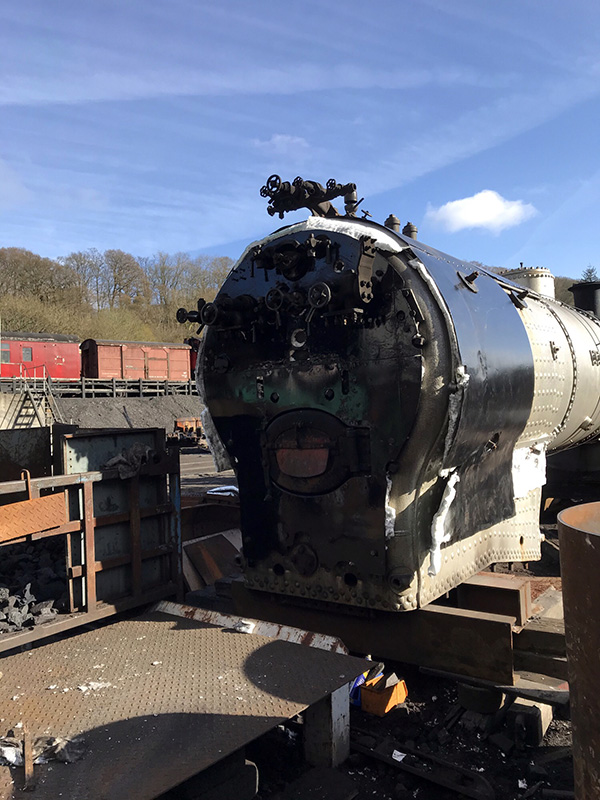 In the workshop, unfortunately, the hands on Ed’s new workshop clock are not moving any more. However, it does continue to show the correct time twice a day.