Over last weekend it was decided to have an extra working party on Monday at Grosmont to crack on with fitting insulation and cladding to the Q6 boiler before the fine weather broke, and Bill Dobson, Nigel Hall, Ed Bolam and Ian Pearson duly assembled. It was fine and mild, with an odd spot of rain, but nothing to disrupt the work. First job was to have a lateral COVID test - all were negative. The four man team then worked together, measuring and cutting insulation, loading cladding sheets onto a trolley, moving them down to the boiler, off loading and, finally, fitting. It is not an easy task lifting and pulling these sheets of cladding over the insulation on the boiler, and then trying to line up the screw holes on the cladding with the crinoline - it took all day to fit three sheets.

Gordon continued fitting the axle box copper pipe work, and also fitting the brackets keeping the pipes secured. Trevor was given the job of tapping 5/8 Whitworth threads on the 8 axlebox top plates and then fitting the short bolts. He also assisted at times with the cladding fitting. Nigel Bill spent a lot of time dressing the wooden inside of the cab roof and also assisted at times with the fitting of cladding. Bill, Ian and Nigel Hall continued as on the previous day, but only managed to fit two cladding sheets with insulation underneath first. As mentioned above it is not an easy job, with poor access and using ladders and the trolley trestle (see photo). 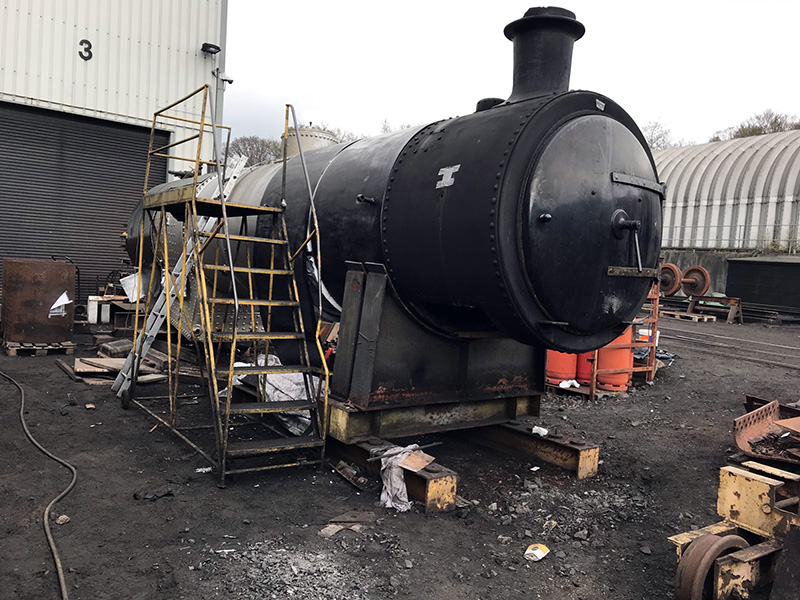 The MPD ash compound had been cleared and new ballast tipped there. Today, that ballast was loaded into a ballast wagon and taken to Beck Hole where it was off loaded onto the track where the subsidence was being dealt with.

Wednesday was another cold, overcast, start but by mid morning the sun broke through to give Bill Dobson, Nigel Hall, Steve Hyman, Ed Bolam, Nigel Bill, Gordon Wells, Terry Newman, Jon Bradley and Ian Pearson a pleasant sunny day, although with a cool breeze coming from the coast. Again, a COVID lateral test was the first priority and, again, all proved negative.

The main task was to complete fitting the No 3 section of insulation and cladding. This fell mainly to Bill Dobson, Nigel Hall, Ed Bolam and Ian Pearson, with assistance when required from Steve Hyman. First job was to cut the required amount of insulation using a pair of garden lawn edge shears - they worked a treat with no bending down. Some adjustment was then required to the No 2 cladding sheet fitted yesterday. Pulling it together using strops and ratchets which Nigel Hall brought from Hopetown made it possible to fix the No 2 boiler band around the boiler and secure it. After lunch it took the rest of the day to fit both pieces of No 3 cladding sheets, using strops and ratchets to secure them and to allow fitting of the No 3 boiler band (see photo with the three front sections of cladding fitted). Ian also removed the bottom section of backplate that fits around the fire hole doors for some slight modification to the two boiler plug holes. These were enlarged by Chris Kelley using a plasma cutter. 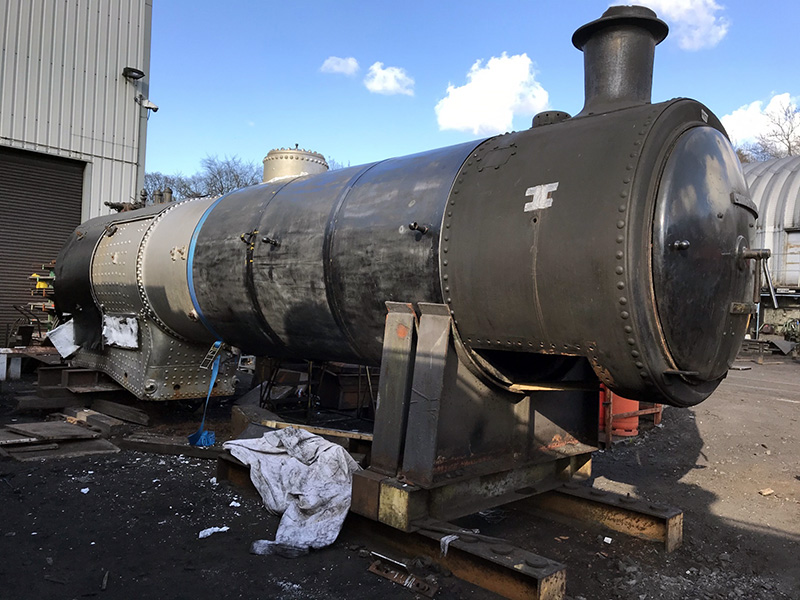 Other jobs undertaken were four mud hole doors and four bottom plugs cleaned by Nigel Bill, along with seven rusty nuts and bolts which belong to the ash pan. Gordon Wells carried on fitting the copper pipe work, and Terry Newman came in to complete soldering some awkward copper pipes which feed the rear horn guides, with Steve Hyman assisting him. Steve also carried out an inspection of the pins on the foundation ring which hold the ash pan in situ. The pins had the rust cleaned from the slots and new ash pan cotters checked to see if they fit. There are seventeen cotters in total: fourteen are OK but the remaining three require some grinding down. Bill Dobson removed all the pumps from the axle box lubricator. These require cleaning as they are contaminated with old thick oil and Nigel Bill has kindly taken them home to clean. Jon Bradley continued to rub down the inside of the cab roof and gave it its first coat of varnish. He also rubbed down the white paint work in the cab which is ready for some undercoat and did some work on the new exit gate.