Another extra working party was arranged for Sunday 2 May at short notice, for Bill Dobson, Ian Pearson, Ed Bolam and Nigel Hall, to tie up some loose ends on the back head cladding while the weather was reasonable. Although mainly fine, there were a couple of heavy showers during the afternoon.

Nigel spent all his time working on the inside of the cab, rubbing down the white paint and gave it a coat of white under coat. The inside wooden roof also got another coat of varnish. Bill, Ed and Ian worked all day fitting insulation, and got the final bits of the (pre-lift) cladding onto the boiler. Ed put extra strops around the boiler and, using a ratchet, tightened the cladding so he could fit some self tapping screws, and also fitted the front boiler band. 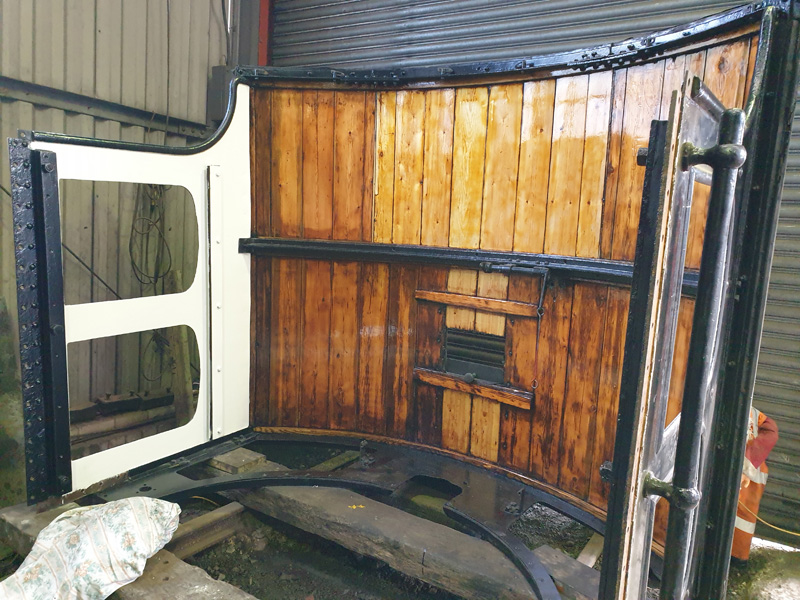 Tuesday was a cold, wet, wintry day at Grosmont but it did brighten up by late afternoon for Bill Dobson, Nigel Hall, Nigel Bill, Trevor Wilford, Gordon Wells, Jon Bradley and Ian Pearson.

Trevor was given the job of cleaning the inside of the lubricator which was contaminated with old sticky oil residue, before dressing five ash pan cotters to give a better fit. Nigel Hall undercoated the black area inside the cab and also applied another coat of varnish to the inside of the roof. Gordon and Bill continued their work with the new oil lubrication system, including the fitting of the copper pipes, while Nigel Bill started cleaning the pumps which had been removed from the lubricator. Jon Bradley came in at lunchtime, and, after lunch, he took the wooden mounts off the plate that holds the steam heat and boiler pressure gauges and gave it a dressing and a coat of black primer. He also did a little work on the new access gate. Ian spent all morning doing a DMU refresher course with Bob Fussy. Then, after lunch, he was cleaning the pumps with Nigel Bill. All eight are now clean.

As has been reported separately, the J27 passed it cold exam by Glyn Coxall, the BV insurance inspector, with Chris Henwood, Richard de Sadeleer and Tom Noble in attendance.

In contrast, Wednesday was a cold but fine day with Bill Dobson, Steve Hyman, Ed Bolam and Nigel Hall. Ian was on the railway roster with Chris Cubitt having a refresher, driving the DMU to Pickering and back. Lateral covid tests were carried out on the team and all were negative. Ed was given a job fitting cup head screws to No 5 boiler top sheet cladding to secure it to the crinoline. He then set up and dressed the two remaining cladding sheets which will eventually be fitted when the boiler is back on the frames. Steve fitted the last piece of cladding to the back head after making the the screw hole bigger so he could fit the securing bolt. Bill started fitting the pumps back into the lubricator. Nigel Hall continued with the painting in the cab - a coat of white undercoat below the roof line and yet another coat of varnish on the inside of the roof (see photo). He also cleaned the three roof plaques (using vinegar) which will be refitted (see photo). The 1975 plaque had previously been cleaned by Nigel Bill using the sand blast. 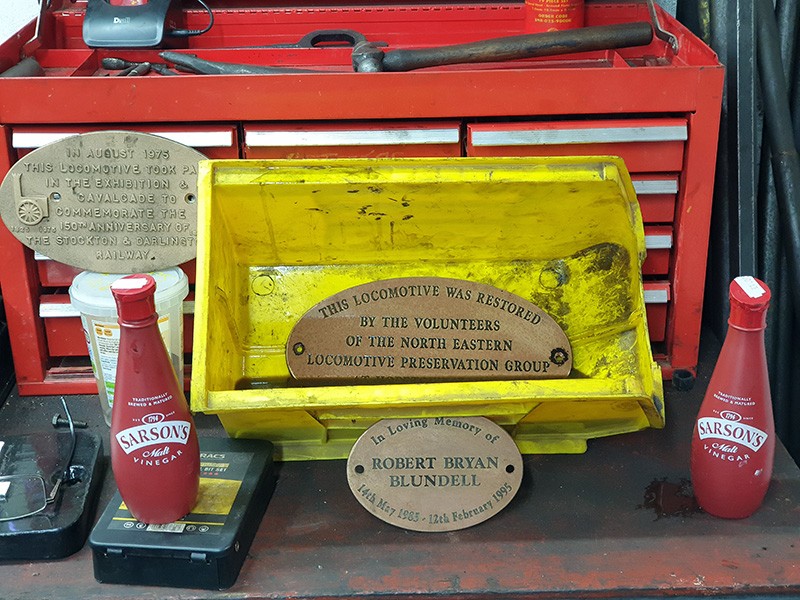