Another late extra working party was arranged for Sunday (9th) to make progress on jobs needing to be done before the boiler lift arranged for the following Wednesday (12th). Bill Dobson, Nigel Hall, Gordon Wells and Ian Pearson were present on a rather dull day.

Nigel continued to paint, including an area of cladding which would be covered by the cab when fitted and would no longer be accessible. He also fitted a plate that will hold the pressure and steam heat gauges. Afterwards he completed a coat of varnish on the cab roof and then a coat of buttermilk on the inside of the cab. Finally, the last two remaining cladding sheets were dressed and given a coat of black primer on the inside area of the sheets. Gordon and Bill meanwhile worked on the copper pipe work and lubrication system, while Ian removed a redundant valve from the left hand side of the manifold. This is to be replaced with a new valve shortly and will supply steam to the atomisers when fitted.

After lunch, Ian and Bill fitted both left and right piston packings and secured them. Later on, while trying to connect the trailing left hand oil box, it was found that the unions and screw connections on the brass oil box would not fit. Although they had been connected for many years it turned out it was just on a single thread and, amazingly, it hadn't fallen apart. Some fresh fittings have been found and Terry Newman will be asked to come and fit the new unions as this is a soldering job.

On the Tuesday, Bill Dobson, Trevor Wilford, Nigel Hall and Nigel Bill were at work on a fine sunny morning, but it turned changeable during the afternoon with heavy showers and thunderstorms. Bill and Trevor worked on the oil pipes and new oil feed boxes and Nigel Hall gave the cab roof another coat of varnish and a coat of buttermilk inside the cab. Nigel Bill collected fifty 21/4 x 7/8 bolts with washers and nuts to fit the smokebox saddle, ordered by Ian the previous week. However, when Nigel got them to Deviation Shed he found that the bolts were covered in grime and the nuts would not screw down the bolts, so he had to spend all day running a die nut down all 50 bolts. He wasn’t very happy and it was probably a good job Ian wasn't present. 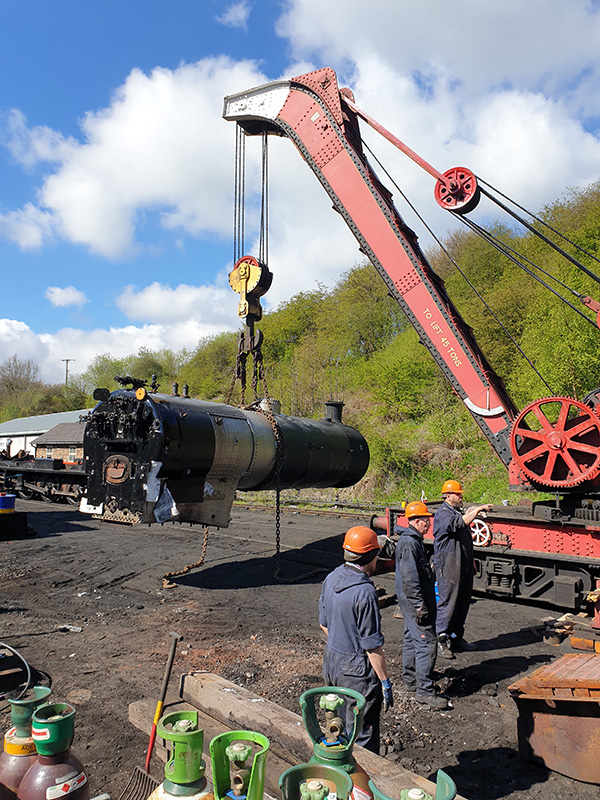 Wednesday by contrast was blessed with fine mild weather and only a slight breeze - just right for the boiler lift, for which Bill Dobson, Ed Bolam, Steve Hyman, Nigel Hall and Ian Pearson were in attendance. When they arrived, the NYMR crane team, with Nick Simpson in charge and Dave Cholmondley driving the crane, complete with 'L' plates, had the chains slung around the boiler ready to lift to allow the ash pan to be fitted. The main NELPG task was to move the cab outside Deviation Shed from its position inside on the south end of No 8 Road. Our rail trolleys were manually lifted over from No 7 Road and spaced out with two long sleepers, one on each trolley. With the aid of the lifting table, some strops, the folding crane and bits of packing, the cab was lifted onto the trolleys and rolled outside. This was a joint effort by all five. It was hoped that the cab would be put on when the boiler and frames were brought round, but Sean Bowler was busy on another job so it had to wait for the next day. After moving the cab outside, a bench was set up at the front of No 6 Road and the last two cladding sheets were lifted on. These were then turned over for Nigel to dress and prime these two sheets on the outside - they were very rusty at the bottom end. These sheets are now ready for fitting next week. Ed, Steve and Ian then gave the walkways and pit a clean up while Bill did some more preparatory work on the new axle oil feed blocks. 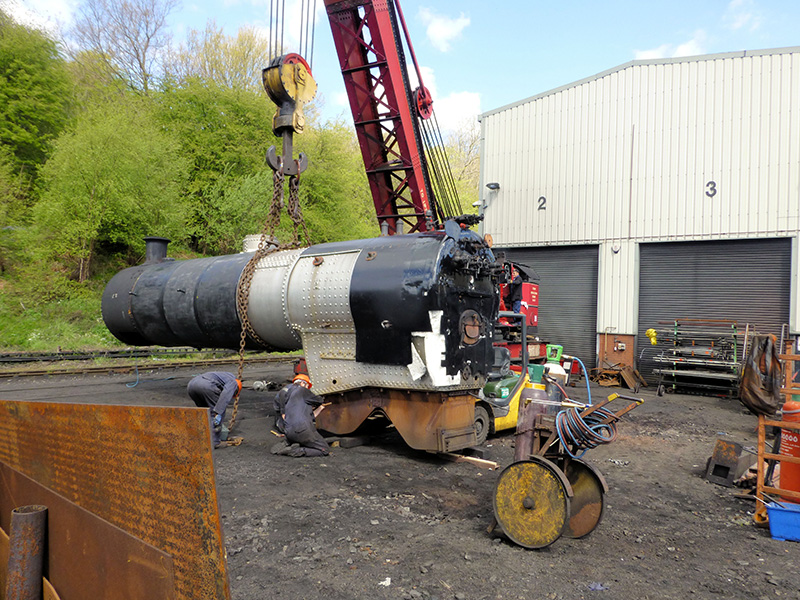 After lunch, Steve polished the three brass plaques from the cab roof which had been cleaned up by Nigel last week. After the ash pan had been fitted, the boiler was lifted and lowered into the frames and the locomotive moved back to Deviation Shed very gingerly over the No 7 Road track (see photos). It was secured just outside Deviation Shed to allow the cab to be fitted the next morning. Bill and Ian fitted 47 bolts, nuts and washers to the smokebox saddle and tightened up half of them, while Steve and Ed between them fitted the expansion brackets to each side of the boiler. With Steve running a die nut down the studs, and Ed running a tap down the nuts, both sides were secured but will require extra tightening. 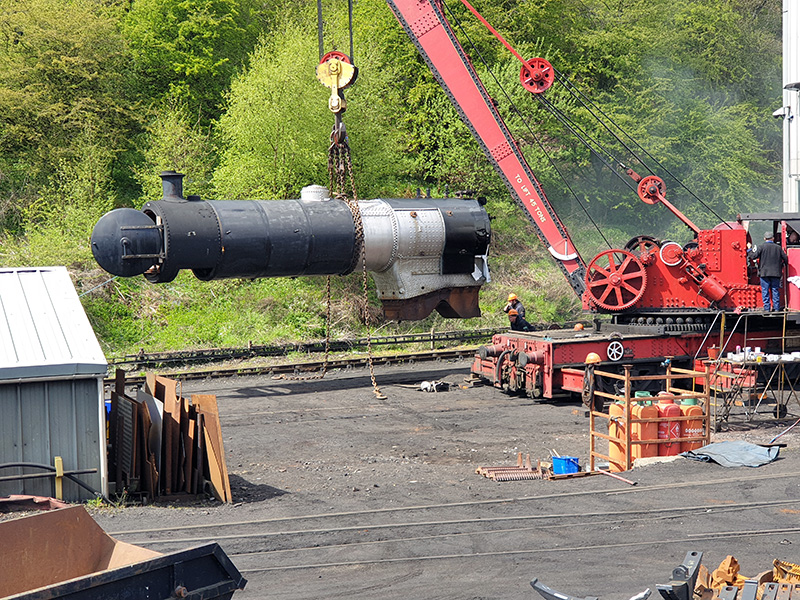 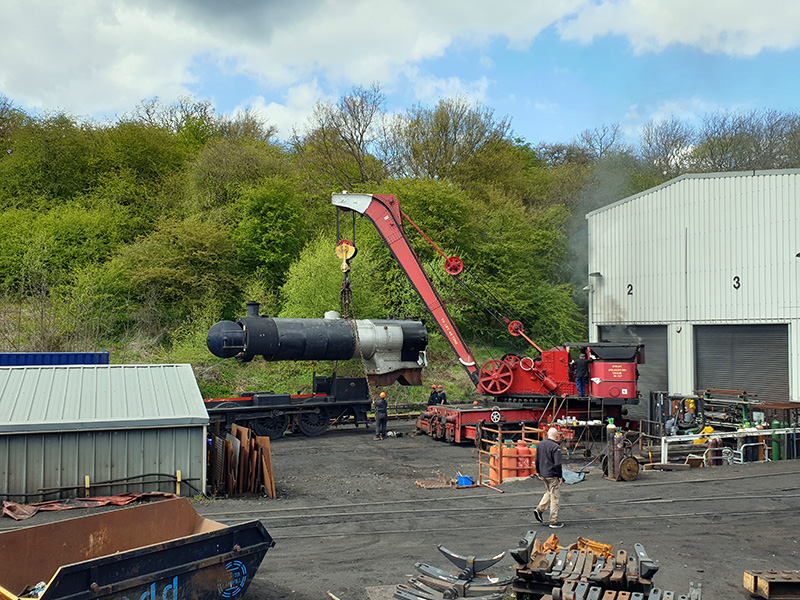 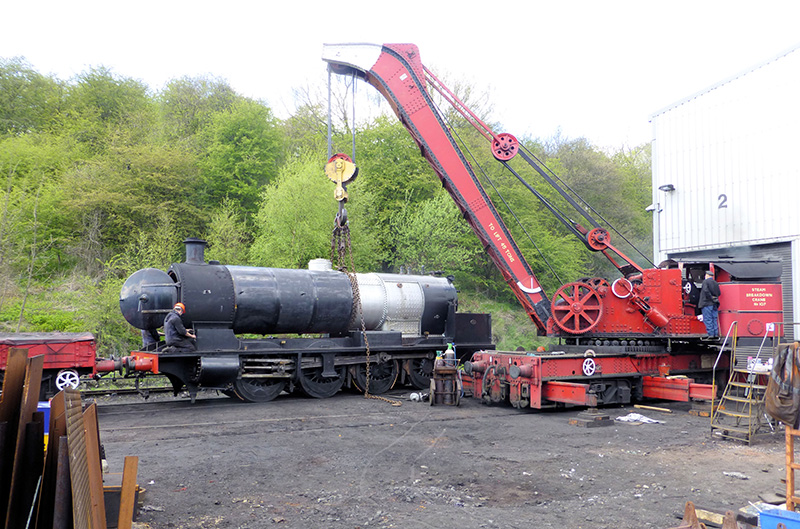 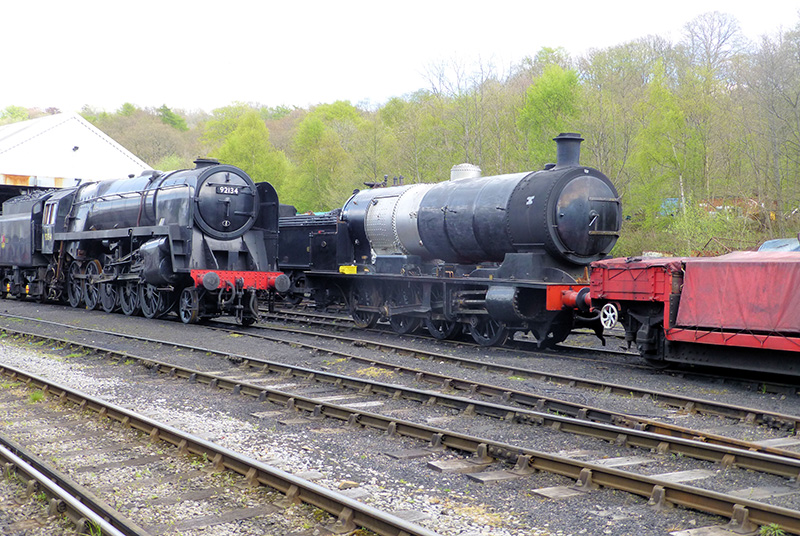 There is a nice video of the lift by Ian Hodgman too.

Finally, Bill came In on Thursday morning and, with Sean Bowler driving the JCB, and with some help from a couple of cleaners, the cab was fitted.