Tuesday was a fine sunny day for Bill Dobson, Nigel Hall, Trevor Wilford, Nigel Bill and Gordon Wells with Ian Pearson joining them after lunch. Nigel Bill and Trevor spent all day fitting counter sunk bolts joining and securing the top of the cab to the lower part. Bill Dobson and Nigel Hall, with Ian after lunch, spent their day fitting the last two sections of insulation and cladding to the boiler. First was the lower left and lower right sheets to No 5 area of the boiler. Then insulation and cladding were fitted to No 4 area - where chains wrapped around the boiler during the lift. The left hand side was first but they are very heavy and take a lot time to manoeuvre into place and screw down. A start was made fitting the right hand side sheet but it was then left for a fresh start on Wednesday.

Gordon continued bending and fitting the oil pipes: this job should be completed next week.

On the railway, passenger services came to an end for the day around lunchtime due to a broken rail on the main line near the shed. The broken rail was removed by the shed staff and P/way gang (see photo). 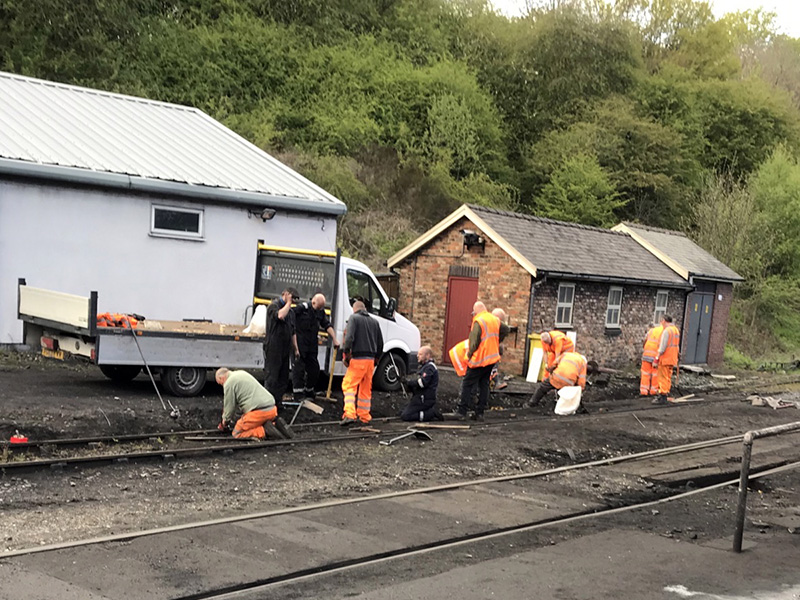 James spent most of his time inside the firebox cutting an 8”x6” section of the ash pan side out on each side so as to access the trailing axle box tops and fit the new oil feed boxes (see photo). He then fitted the oil boxes and connected them to the flexible supply pipe. Afterwards, James made two steel covers to be welded over the holes in the ash pan. While inside the firebox, he connected the ash pan to the diaphragm bracket and also the rear support bracket for the fire grate. 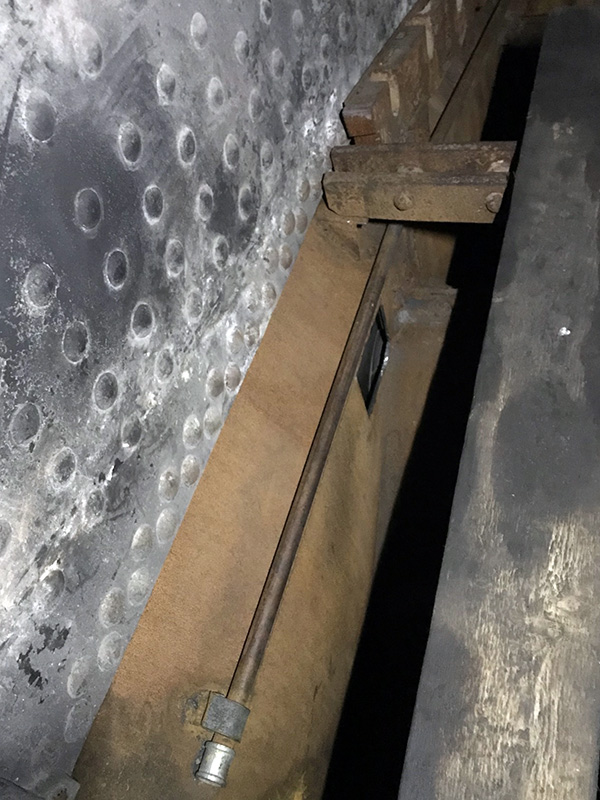 Bill Dobson, Nigel Hall, Ed Bolam and Ian Pearson continued fitting the No 4 cladding sheets, assisted by Steve Hyman who was also continuing to fit the cab counter sunk bolts. The LHS sheet is now in place and seated on the crinoline. The RHS cladding sheet is proving very troublesome in getting it lined up over the crinoline. It is now secured on the top of the boiler and has two strops and and a ratchet holding it, but still needs a little tweaking next week.

Bill also spent some time on the new oil lubricator. He had found that one of the pump spindles was bent and would not work properly, so Barry Nesom made a new spindle. Bill then fitted it to the pump mechanism and then into the lubricator before giving it a test by manually operating it: all pumps started to deliver oil.

Bill arranged with Barney Casey on Wednesday afternoon for Barney to come up to Deviation Shed on Thursday and check the fitting of the new smokebox main steam pipes with Ian and Bill assisting. On a rather dull Thursday therefore, Bill and Ian met Barney and Chris Kelly late morning in Deviation Shed where the steam pipes were lifted and trial fitted. Both pipes were a good fit and arrangements will be made to have the flanges welded by a coded welder. After lunch Bill and Ian completed fitting the last few bolts securing the cab. They also fitted the hand rail boss to the left side of the cab and the reversing bracket inside the cab.

Bill Dobson and Nigel Hall were back again on Saturday (cannot get enough of it).

A lot of attempts to get the 4R cladding sheet to spiral backwards to sit adjacent to 3R (the dome piece) on the crinoline band. In the end the pieces still overlapped, but were only foul by ~1/32”. Rather than undo 3R and try to move it forward they gave up and used an angle grinder to remove 1/32” from the front edge of 4R over about 18” length. Then, as everything was tightened up, the effects of causing the earlier spiral came back to haunt them as the overlap at the bottom was not on the crinoline band and under the 3-4 boiler band. More struggle with pieces of wood, bars, and trying to squeeze between the motion to remove the spiral and force the underside of 4R forward. At long last, by 2pm, sheets 4L and 4R were in position and the boiler band tightened.

Next look for the 4-5 boiler band – and find it corroded. Strip and paint with primer. It will have to wait until Tuesday for fitting. We may need a very thin volunteer underneath!

Bill had spent all day testing the lubricator pumps. All seemed well except that one of the pumps would only work with the pump travelling in one direction.

We started to fit the handrails. The rear RHS slides through the stanchions easily. The reverser steam control linkage which fits through that section was another matter. After two hours we have it almost in the right position, but have left it until Tuesday to complete and to fit the steam reverser linkage. The  studs need to be replaced in 2 of the stanchions before the other handrail sections can be fitted.

The Q6 is starting to look like a locomotive again, the various piles of bits are rapidly diminishing.